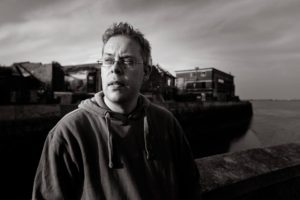 I’m pleased to welcome crime author, Nick Quantrill to the blog to talk about his revision process today.

Nick was born and raised in Hull, an isolated industrial city in the north east of England. His Joe Geraghty trilogy of crime novels are published by Caffeine Nights, as his latest, “The Dead Can’t Talk”. A prolific short story writer, Nick’s work has appeared in various volumes of “The Mammoth Book of Best British Crime”.

In theory, what I call the first draft isn’t too rough, primarily because I revise as I write. I work in chunks, stopping to read through and assess at various points. It takes me longer to pull a draft together, but (hopefully) the pay-off is being that bit closer to something that holds together.

Other than whisper a silent pray and pour a strong coffee? Print it out. I find the act of reading it through, on paper with pen in hand, changes the way it reads to me.

I suspect it’s true for all writers, but I’m certainly aware of weaknesses and things that need fixing in my draft as I’m working on it, so assessing the damage and working out solutions is an ongoing process. It’s often something that goes on subconsciously to a large extent, but sometimes the act of writing it down in list form helps.

No. I like to work on it myself until I’m satisfied. I can’t let it go to other people until I feel like I’ve done all I possibly can. I may well choose to take advice at an earlier point about something specific, though, and feed it into the work.

It’s all about the big picture at that stage for me, looking at it and assessing whether it makes sense and whether the structure is sound. This is stuff I’m always looking at as I progress, so hopefully there’s nothing too unpleasant lurking when I reach the end.

I like to revise on paper. I always print the manuscript, or part-manuscript, and sit down with a pen and a number of highlighters and get to work, scribbling down notes.

The hard yards are put in with a paper and pen before putting through the changes on my laptop. I sometimes do a light edit on screen, but there’s something about shuffling paper around that stimulates my mind in a different way.

I tend to edit in batches, maybe a few chapters at a time, or an entire ‘act’. The pages inevitably take a hammering, but the fact it’s not a full novel gives the feeling it’s not totally overwhelming.

It’s probably somewhere in the middle of that. I suspect like most writers, I’m constantly thinking about the story, so effectively editing in my head, or at least working out how to fix problems. Essentially, if it’s a big issue, I can’t move on until I’ve fixed it.

I’ll probably have a breakdown if I think about this too much! The entire process is fraught with such difficulties. Once you change one thing, it’s like watching a row of dominoes fall. An innocuous change can have unforeseen challenges, but sometimes what you think is going to be a big change sometimes plays out relatively easily.

I think that’s a good question and one that’s maybe psychological. If it’s a writing day without distractions (ha!), 1,000 words is the minimum target. Sometimes I spend a day fixing a single issue, but it can signal a big breakthrough. It’s tough, as editing is the hard work element of the job, but progress isn’t something you can always measure easily.

I think you have to learn to love both. The first draft, getting the story out, is great. It’s creative, fun and often surprising. But there’s something inherently satisfying in taking that raw material and polishing it up into something better.

Generally speaking, it’s something like a year-long cycle. Because I stop regularly to edit, it does take longer to pull together what’s notionally a ‘first draft’, but because of the work that has gone into the process, I hope the draft is in reasonably good shape, certainly in terms of its structure. But it’s the job of others to tell me if that’s the case or not… 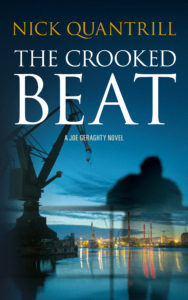 When Joe Geraghty’s brother finds himself in financial trouble, it’s only natural that he turns to the Private Investigator for help. But when it relates to a missing consignment of smuggled cigarettes, it’s not so easily sorted. Drawn into the murky world of local and international criminals around the busy port of Hull, Geraghty knows the only way to save his brother is to take on the debt himself. As he attempts to find a way out of the situation, the secrets and conspiracies he uncovers are so deeply buried in the past, he knows he’s facing people willing to do whatever it takes to keep them that way.

For all previous Revisions posts, Here.

If you’re interested in taking part in either the first draft or the revisons process Q&A then please do let me know.