The ninth book in the detective Hannah Robbins series was published last week. (Download HERE) Today I thought I’d share an inside look. A sneak peek at the story unfolding on the pages. Read on for the first two chapters.

The night was darker than anything Adrian Sykes had seen before. Like someone had switched off the stars and the moon.
The street lights were far apart and only offering a puddle of glow. As he moved between them, Adrian was plunged into the depths of blackness again.
Pull yourself together. What the hell are you – a five-year-old child? You’re a grown man. You can walk home without being scared of the dark, for fuck’s sake. Adrian pulled the collar of his coat closer to his neck to stave off the wind that whipped around him. His shoulders hunched up to his ears.
And yet his footsteps didn’t slow. Because if they slowed then something could reach out of the blackness and touch him.
A subconscious voice was telling him there was something in the dark to be afraid of.
Home was only ten minutes away. He’d been to band practice and though it was early April, winter clung on, but Adrian refused to use the car for journeys short enough to walk. Cars were bad for the planet. How he wished he cared less. It didn’t help that the homes on this section of London Road were set back, behind thickets and trees. He wouldn’t be visible to the residents behind curtains closed to the night.
Adrian quickened his pace.
He pictured Safiya waiting for him at home. How she’d laugh at him for this stupid fear, and yet he still couldn’t push it away.
The street was quiet. No one wanted to be out if they didn’t need to be. He was alone out here.
But how ridiculous was he? Why so jumpy? He was scared of shadows, like a child.
But he wasn’t a child. Adrian straightened and pulled his shoulders back. He was a grown man. He pushed one hand in a pocket to provide a show of nonchalance and marched forward. His other hand clutching hard to his clarinet. Knuckles turning white. As he walked, his footsteps rang loud in his ears.
Adrian smiled. Safiya didn’t see a macho man when she looked at him, but she loved him all the same. Safiya took his music and animal-loving soul to her heart and cradled it with her own. He couldn’t wait to get back home to his wife and forget about tonight’s ridiculousness.
There was no one else out here. Not at this time of the evening. Not in this wind. People hibernated until spring had really sprung. They didn’t stroll the streets looking for people to chat with. Another few minutes and he’d be safely wrapped up in his dressing gown with a mug of hot chocolate and Safiya in his arms with a box set on Netflix before bed.
There was a sound behind him, an echo. It was the sound of footsteps. Someone was attempting to be quiet behind him but he was so strung out, his senses were on high alert.
Of course, it was fine for someone else to be out here. This was a public path. That’s what it was for. His mind was rambling. A jumble of thoughts, rushing around inside his head.
There were footsteps behind him. On a public footpath.
In the dark. During the night.
Adrian’s heart thundered. Blood pumped in his ears.
He held onto the image of Safiya at home waiting for him and clutched the clarinet case tighter. It was a weapon if he needed it to be. It was large and it was heavy. Slug someone round the head with it and they wouldn’t get very far.
Bravado swept over Adrian and he straightened his spine, only now realising how scrunched and small he’d become. He strode towards home and towards Safiya. She was waiting for him. He was being ridiculous.
Adrian should have looked behind him. Because tonight there was danger lurking in the shadows.

The Broken Places – A sneak peek! 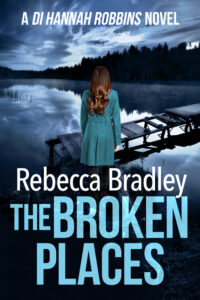 When Adrian Sykes is abducted in the night and brutally murdered, he leaves behind a pregnant wife, and no answers. Or are there?

A secret unit within Nottinghamshire police has an angle, but it’s not one they’re willing to share. Information is hidden and secrets are kept.

To firm up their case, undercover officer Molly Bell must enter the lion’s den to discover the truth, but it’s more difficult than expected. Secrets unravel, and a collision course is set.

Suspended from duty and back from rehab, Detective Inspector Hannah Robbins is at home, patiently awaiting her misconduct hearing, when her past slams into her present. Will it drag Hannah under and finally destroy her, or can she face it head-on and survive?

Do let me know your thoughts. I’d love to hear from you. And I apologise if the formatting is off at all. I’m still getting used to the new layout in the back here!