Here we are again, the day after another book club. Last night I was unable to host the meeting as I’m recovering from Covid. I hadn’t read the book because I’d been ill and was still too fatigued to host the meeting. It was a mild dose though, I didn’t need medical intervention and am day by day getting better. Huge thanks have to go to Marina for hosting last night’s meeting. I emailed her as soon as I realised I was ill and not going to be able to read the book and she happily stepped in for me and having watched the video, I can say she did a brilliant job and the book club is in safe hands whenever I am ill.

Please do watch the video and catch up if you weren’t able to make the meeting. The book being discussed is A Chemistry of Death by Simon Beckett. Be warned there are spoilers within though. So maybe don’t watch until you’ve read the book if you are planning on reading it. You’ll notice it’s not in gallery format this month but it’s still easy enough to follow as the people speaking are on the screen.

We had a couple of new members this month and I personally want to welcome them. I look forward to meeting you in virtual person as it were, next month.

If you fancy joining the book club, it’s a great distraction during the world-wide lockdown, you can find details HERE.

Now for the vote. The theme for this month is books published in 2020. We seem to have read some quite old books recently, so I wanted to bring us more up-to-date, especially as the virus may have hit publishers hard last year with the lack of festivals.

Please read the blurbs and leave your vote in the comments before the end of Friday 29th January. The next meeting is 8 pm (UK timezone) Monday 22nd February.

The Other Passenger by Louise Candlish 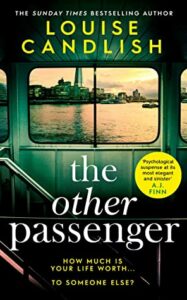 You’re feeling pretty smug about your commute to work by riverboat. No more traffic gridlock or getting stuck on the tube in tunnels (you’re claustrophobic); now you’ve got an iconic Thames view, fresh air ?— a whole lifestyle upgrade. You’ve made new friends onboard — led by your hedonistic young neighbour, Kit ?— and just had your first ‘water rats’ Christmas drinks.

But the first day back after Christmas, Kit isn’t on the morning boat. The river landmarks are all the same, but something’s off. You disembark to find the police waiting. Kit’s wife, Melia, has reported him missing and another passenger witnessed the two of you arguing on the last boat home after your drinks. Police say you had a reason to lash out at him. To kill him.

You protest. You and Kit are friends ?— ask Melia, she’ll vouch for you. And who exactly is this other passenger pointing the finger? What do they know about your private lives? No, whatever coincidences might have occurred that night, you are innocent, totally innocent. 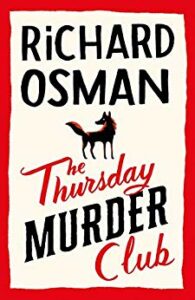 In a peaceful retirement village, four unlikely friends meet weekly in the Jigsaw Room to discuss unsolved crimes; together they call themselves The Thursday Murder Club. Elizabeth, Joyce, Ibrahim and Ron might be pushing eighty but they still have a few tricks up their sleeves.

When a local developer is found dead with a mysterious photograph left next to the body, the Thursday Murder Club suddenly find themselves in the middle of their first live case. As the bodies begin to pile up, can our unorthodox but brilliant gang catch the killer, before it’s too late?

(This isn’t available in ebook format in the US but it does have over 30,000 reviews so I believe easily attainable. Something to consider when choosing.) 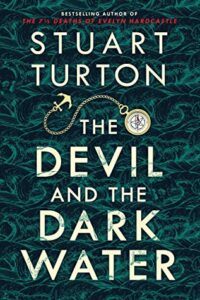 It’s 1634 and Samuel Pipps, the world’s greatest detective, is being transported to Amsterdam to be executed for a crime he may, or may not, have committed. Travelling with him is his loyal bodyguard, Arent Hayes, who is determined to prove his friend innocent. 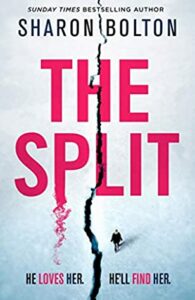 She’s got nowhere else to hide…and now he’s coming for her.

Two years ago Felicity Lloyd desperately signed up for an extended research trip working on the remote island of South Georgia.

It was her only way to escape.

And now he’s coming for her.

Freddie Lloyd has just got out of prison for murder and is on his way to where Felicity is hiding.

And this time, he won’t stop until he finds her.

Because no matter how far you run, some secrets will always catch up with you…

Haven’t They Grown by Sophie Hannah 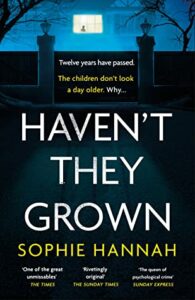 All Beth has to do is drive her son to his Under-14s away match, watch him play, and bring him home.

Just because she knows her ex-best friend lives near the football ground, that doesn’t mean she has to drive past her house and try to catch a glimpse of her. Why would Beth do that, and risk dredging up painful memories? She hasn’t seen Flora for twelve years. She doesn’t want to see her today, or ever again.

But she can’t resist. She parks outside the open gates of Newnham House, watches from across the road as Flora and her children Thomas and Emily step out of the car. Except… There’s something terribly wrong. Flora looks the same, only older. As Beth would have expected. It’s the children. Twelve years ago, Thomas and Emily were five and three years old. Today, they look precisely as they did then.

They are still five and three. They are Thomas and Emily without a doubt – Hilary hears Flora call them by their names – but they haven’t changed at all.

They are no taller, no older… Why haven’t they grown?

Hide Away by Jason Pinter 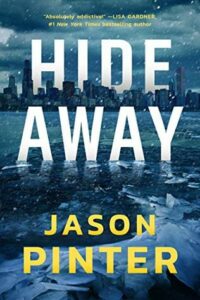 On the surface, Rachel Marin is an ordinary single mother; on the inside, she’s a fierce, brilliant vigilante. After an unspeakable crime shatters her life, she changes her identity and moves to a small town in Illinois, hoping to spare her children from further trauma…or worse. But crime follows her everywhere.

When the former mayor winds up dead, Rachel can’t help but get involved. Where local detectives see suicide, she sees murder. They resent her for butting in—especially since she’s always one step ahead. But her investigative genius may be her undoing: the deeper she digs, the harder it is to keep her own secrets buried.

Her persistence makes her the target of both the cops and a killer. Meanwhile, the terrifying truth about her past threatens to come to light, and Rachel learns the hard way that she can’t trust anyone. Surrounded by danger, she must keep her steely resolve, protect her family, and stay one step ahead, or else she may become the next victim.