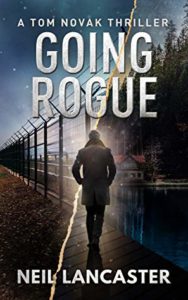 Tom Novak is back.

When a spate of deadly terrorist attacks hit the streets of London, Tom finds himself thrust into the middle of a fight for the survival of all he holds dear.

When the attackers hit closer to home than he could ever imagine, Tom is forced to make a choice between his duty or his conscience. In doing so, he enters a series of increasingly dangerous worlds, in the darkest corners of humanity.

Can Tom and his colleagues get to the bottom of a plot which threatens the very fabric of society?

Will they stop the terrorists before it’s too late?

When faced with the ultimate choice, which way will Tom go?

After all, as Cameron always says: “Always do right, boy…”

I read this book last week and loved it. It’s the second book in the Tom Novak series. Neil, like myself is an ex-police officer, doing his service in the Met police. And his knowledge of policing shines through in this book, but not in a, let-me-tell-you-the-boring-stuff kind of way. It’s a pacey read, but you feel comfortable in Tom Novak’s shoes as though you really know your way around the police service. He may not stick to the rules of policing – this isn’t a police procedural book – but what policing is in here is well-trodden and easy.

Going Rogue is a thriller set in a policing background. Novak has a military background and is not afraid to use it. In Going Dark, the first book in the series, which I’d highly recommend reading, Tom was targeted and had to fight for his life. In Going Rogue, he goes undercover, an operation that doesn’t quite go as planned and this is where Tom, as you’d expect in a book like this, takes things into his own hands.

It’s not blatantly said in the book, but Tom is a psychopath. It’s interesting to see a psychopath used in a book as the good guy and not the bad guy for a change. And having read several non-fiction books I know that psychopaths are not all crazy serial killers, a lot join regimented jobs like the forces and others become surgeons and high-level bankers.

I really liked the relationship between Tom and Buster, particularly when they are spending some quality time in a locked cellar together. I also like Pet, a CIA operative who sometimes helps Tom out.

As a new series, I’m looking forward to following it and seeing where it goes. If you’re looking for something a little different, I’d definitely recommend this series. Give it a try and see what you think.