Today I’m thrilled to welcome crime author Ian Patrick to the blog to talk about his revision process. 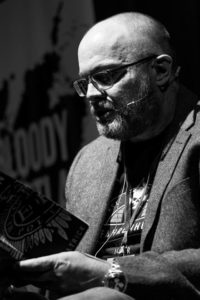 Rubicon is his debut novel published by Fahrenheit Press. Stoned Love the second in the series. The BBC has optioned Rubicon for a six part TV series. He now lives in rural Scotland where he divides his time between family, writing, reading and photography.

It’s raw but tidy! Fahrenheit Press has published my second book, Stoned Love, so I will reflect on this journey with these questions. It was in reasonable shape structurally (thankfully) so needed a thorough read through for spelling mistakes, grammar and anything extra to make it match fit. What I have realised though is that there will still be an error or two no matter how many times you got through it.

What is the first thing you do before you start to revise?

I leave the first draft alone for two – three weeks. It helps to refresh my mind so when I return to it it’s like reading it for the first time and my eyes spot errors quickly.

Who am I kidding? That’s what I should do but I don’t! I try this approach but I start the edits the day after I type, The End. It works for me as I’m lost when I’m not writing or reading.

Like any good copper I survey the scene and take in what I can before I storm in and mess everything up beyond recovery. I work on sentences that don’t add up and reduce swearing!! I’m beginning to appreciate there’s a reader boundary between reality and fiction in crime. I can, and do, overstep it but I hope it’s in the right places and not gratuitous as that’s not my intention at all.

I revise and revise until I feel happy that I could submit it to a publisher. At this stage my wife reads through along with another trusted beta reader. Once each one has done the arduous task I look at the feedback. It’s about now my snacking has gone through the roof; I hang my head in my hands for a few hours, reflect, move on, and make any adjustments based on the feedback given! I don’t do everything suggested BUT I certainly undertake 95% of it. At the end of the day I take full responsibility for the outcome.

I focus on tightening up the language and sentences making sure it all fits together and makes sense. I have to remember that the reader isn’t thinking what I’m thinking so sometimes I need to spell it out through the characters or it won’t make sense at all! This is where the beta readers come in. It’s easy to get lost in a fictional conversation and think everyone will understand where I’m coming from. My characters are often involved in a murky underground world of truth, lies, and deception so it would be easy to get lost. That’s why independent eyes on the manuscript are essential. Brutally honest feedback is a must not a maybe. Without it there’s little point in the role of beta reader.

Do you have any rituals, writing, or real world, when revising a manuscript?

None. Head down, and get on with the task in hand. It’s a part of the process and it’s where the book comes to life. You finally see the work evolve. I’m focused on the reader. Will they understand it and is it worth their time reading it? If I can say yes, then my job is done and it’s over to the reader to judge. It’s all for them after all.

In what format do you revise, paper, or computer?

Computer first. Then I’ll print it all out and do the same on that. Ian Rankin recommended that via Twitter and you certainly pick up things in print you miss on the screen. He answered a question I asked about this after a photo of a manuscript he was working on appeared on Twitter. I figured he’d know best!

Not messy at all. I’m a Scrivener user so work through each chapter in order. I write in exactly the same way. When I approach a story I have a start point and that’s it. Writing in response to how characters react to what I put down on screen is how the whole book develops into the final novel. A detective only ever has a start point from where the investigation begins. After years of investigating that’s how my mind now writes.

In Stoned Love there was some overhauling but in its predecessor, Rubicon, not as much. I’ve heard writers say book two is always a tough one to write and I felt that with Stoned Love but still enjoyed the journey and watching it develop. I always remind myself I’m in a privileged position so whatever arises can be dealt with so I just get on and deal with it!

Strong language. I always have to tone the language down enough that the reader will accept it in the context it’s in and that’s always a tough one when you don’t want to lose authenticity of voice. I’d rather lose the words than readers though. This is where the beta readers’ are key.

I don’t monitor it at all. I sit down everyday and do some until I’m sick of looking at it or family life takes precedent. I have a word target for first draft that Scrivener tells me when I’ve hit it. I then edit until I think it’s done. I edit again after the beta readers’ feedback.

Great question! If I’m writing I’m moving forward and that makes me happy at whatever stage I’m dealing with. I hear writers saying it’s hard work but I’ve experienced hard work in the police and there’s no correlation. Yes it takes energy, time, and patience but I don’t regard it as hard work. It’s a privilege. I’m aware many would want to be in my position as I was when I first embarked down this writing path. That’s not said with arrogance it’s just an observation relevant to me personally.

Coffee by the flask load! I need to drink more water but where’s the fun in that?

It will take as long as it takes to be in the best shape I can get it into before I submit it to Fahrenheit Press. Stoned Love must have been good as they signed me up again! The feedback from Chris McVeigh (publisher) was positive and humbling. Initial reviews reflect his thoughts so I’m very pleased. I would say to anyone starting out, like me, to ask yourself honestly would you be happy to receive this as a publisher? If you have any doubts then it isn’t ready.

There will always be the feeling of is this good or the best I can do? A natural questioning is totally different. You’ll know when you’re satisfied you’ve given everything to the book. How? You’ll be sick of reading it! Again, it’s only my opinion based on my limited experience to date. Everyone’s different and that’s what makes the writing world wonderful.

My pleasure and thanks for having me here. I love your writing and the passion you give to your craft. It’s been an honour to be asked back. 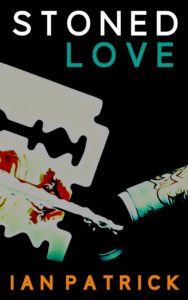 Detective Sergeant Sam Batford has been lying low at a remote safe house in the highlands of Scotland. He’s doing his best not to attract the attention of the enemies he made, on both sides of the law, during his last under-cover operation but Batford knows he’s just killing time until he’s called to account.

Inevitably the sharks begin to circle and as Batford is called back to front-line action in London he’s thrown into a deadly game of cat and mouse where it seems everyone is out to get him.

After having to endure a frustrating resolution to their previous undercover operation together DCI Klara Winter from the National Crime Agency is determined to prove that Batford has crossed the line into criminality and finally bring him to face justice.

All Sam Batford wants is to outwit his enemies long enough to stay alive and come out ahead of the game.

Ian Patrick’s previous Sam Batford novel, RUBICON has been optioned by the BBC.