Today I”m pleased to welcome crime writer and friend, Ian Patrick to the blog to talk about his first draft process. 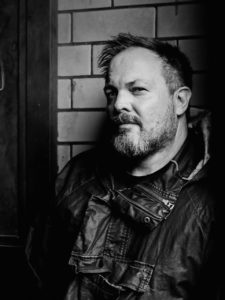 Rubicon is his debut novel published by Fahrenheit Press. He now lives in rural Scotland where he divides his time between family, writing, reading and photography.

Fire up Scrivener and open a new manuscript. As a debut writer I decided to use Scrivener based on your advice! It works well for me and I have a second book down using the same system. As a newly published writer I can’t say I have much of a system yet!

I treat the writing process like an investigation. I see what I have in terms of idea. That could simply be a start and an ending. From this I work through, in order, and watch the story unfold. This way I can close doors and open others where the story requires it. I let the characters evolve and with that the story unfolds.

I make notes using Dictaphone, iPhone, notebooks, and any other scraps that come to hand. Very disorganized here! I eventually collate them all and use Scrivener to drop them all in a folder.

I write crime having spent twenty-eight years investigating it. Research is still vital though as procedure changes and technology and forensic science progresses. I know London pretty well so setting is easier for me. I will use Google maps too to make sure I’m as accurate as possible. As a reader I’m looking for a good read and unless something is glaringly obvious I rarely pick up on research ambiguity. It’s fiction for a reason.

I use news feeds for research. You get good crime stats from this and ideas for future work. Social media is also a good place to look. As my time away from London increases I will no doubt have to pay the occasional visit to remind myself of the feel of the lace as well as locations I choose to use.

I use Scrivener folders and this keeps everything in one place and is easily accessible. It links to the web too so pages can be found easily. It also stores images so this is another bonus. I will always backup to the cloud when writing. As a photographer I do this too.

With Rubicon it started with an idea where I knew the beginning and the end. From there I had to fill in the blanks. I like the story to evolve in sequence as an investigation does. With any crime you have a start but you don’t know the end so you have to work things out in a logical sequence and deal with whatever is thrown up as the investigation/story unfolds. Even when you have a crime with a suspect at the scene holding a smoking gun, you can’t assume he or she is the guilty party. To assume makes an ass out of u and me; as I was always taught.

A laptop. I can write anywhere and that comes from policing. You have to write under pressure at times and in weird environments! I have no rituals or any other lucky charms to get me through other than coffee!

Definitely lost whilst the words flow. I get immersed in the scene and love it. 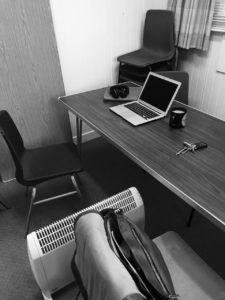 Mine varies. It has been the back room of a village hall, whilst my youngest was at playgroup, to 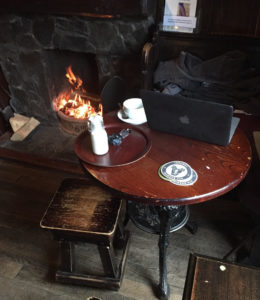 a local Inn that took pity on me writing in a drafty room and invited me to write there. I wasn’t complaining! I finally have a study at home so see myself spending more time here to write. I was also using my local library for a time. When we were living down south I was using the University of Hertfordshire’s Library. This was a great place to write.

Just write. Editing is a totally different writing experience, for me, and I need to get the basis of the story down first. Once the framework is there I can see glaring plot holes or continuity mistakes easier.

Write each day. I try and achieve this but it doesn’t always work that way due to work/ family balance. I don’t like being a slave to a word count. Just write what I want to write and don’t force the process.

It takes me six months to complete the first draft then I leave it for about a month. When I come back to edit I’m seeing it with fresh eyes.

For Rubicon I used them all. I edit on computer then send to ereader. I also print the whole manuscript off. Jane Issac and Ian Rankin recommended this method and it works. You get a different perspective reading on paper and it emulates the paperback book experience more.

Edit until I’m sick of seeing it! Once I’ve had enough of it I know it’s ready.

Thanks for having me here. I love this series as well as your police procedural stuff. A great privilege to be invited.

You can find Ian on Twitter | Amazon ebook | Amazon paperback

Two cops, both on different sides of the law – both with the same gangland boss in their sights.

Sam Batford is a corrupt undercover officer with the Metropolitan Police who will stop at nothing to get his hands on fearsome crime-lord Vincenzo Guardino’s drug supply.