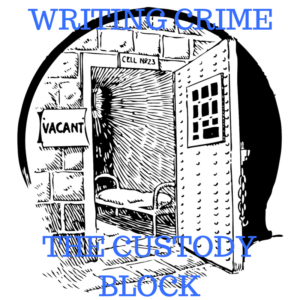 Last time saw us making an arrest. So, what do we do with our newly handcuffed offender now?

You do have them handcuffed, don’t you? Or should you?

Actually, you should only officially handcuff them if one of three specific grounds are in play.

If none of the three above grounds are there then you can arrest your offender and put them in the car without handcuffs. You don’t often see that on the TV, do you?!

Okay, moving on, now I’ve confused the situation slightly. We’re going to the custody suit to book our offender in.

The custody block is an airless, windowless, cheerless place. It has high desks so no one can jump over them and attempt to hurt the staff that works there. And being only 5ft tall, there were times I had to stand on my toes just to talk to the custody sergeant! It’s a busy place and you can often have to queue with your offender to be booked in.

Booking in is just as it sounds. The custody sergeant has a computer where he books the offender into the system so he knows who he has locked up, who she is responsible for. Because every person who comes through those doors falls under the responsibility of the custody sergeant.

Also, as I said last time, you need to have reasonable grounds for your arrest or it is possible your C/sergeant will refuse to detain.

Booking in involves taking all details including any health details that might be relevant during their stay. Bearing in mind police can detain someone for 24 hours without release.

Your offender is given their rights, these are;

Once they have been booked in and their rights given then their DNA, fingerprints, and photographs will be taken.

And this is it. Your offender is now safely ensconced in a custody suite awaiting interview!

Are you surprised by any of this process?

You can find all the previous posts in this series HERE.

If you have any items you want addressing in a blog post, let me know.