We’ve found our body, done the post-mortem and searched our premises, where we’ve now found our suspected offender. So what are we going to do? 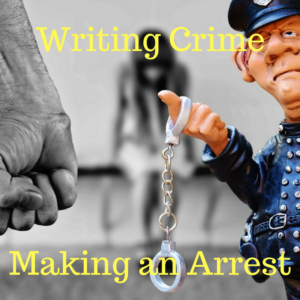 Well, we’re going to arrest him, of course.

But, let us step back a moment. Before you’ve gone into that search, your SIO (Senior Investigating Officer) will have recorded an arrest strategy in their policy log, in the eventuality that you come across your suspected offended.

This will cover all the grounds for arrest, which you will need when you turn up with him (or her) at the custody block because the custody sergeant will not authorise detention if you do not have reasonable grounds for your arrest. In custody, they are God. Everything that happens in there – the hammer falls on their head.

So, you need some evidence by this point. Some of their DNA needs to have turned up on your murder victim for instance and you have a statement from a witness saying they were seen arguing violently only an hour before time of death. This doesn’t mean the person killed your victim. The DNA could have got on your victim during the violent argument and your suspected offender walked away with someone else coming along and killing your victim afterward. But it is enough to place your suspect there. Enough for an arrest to interview, for them to have to account for the facts.  This person is likely to be your main suspect, but you can work your way around some situations – as I’ve shown – if you want to lay a few red herrings, when writing.

DNA is seen as the gold standard, but it also has to have context applied to it. So, what is the DNA we’re talking about and where is it? How long could it have been there? What methods could it have got there by?

Back to your arrest. The words of arrest in the UK are;  You are under arrest for (crime – if this is murder, you’d say murder 0f person) at (place) on (date).

Then you caution them.

You do not have to say anything, but it may harm your defence if you do not mention when questioned, something you later rely on in court. Anything you do say may be given in evidence.

If you fail to caution them anything they say is not admissible in court, so you have to say this. The exceptions to both of the above is if your offender is fighting with you. You can technically say to the person as you’re fighting to get them under control, ‘You’re nicked‘ if you knew they would understand that, but really, ‘You’re under arrest‘ will do because anything else is just too much. It’s still a legal arrest. You give them the rest of the information once you have control of them.

I hope this was helpful. Next time we’ll go through booking them into custody and the custody suit.

You’ll find the rest of the Writing Crime series Here.