In Bitter Chill by Sarah Ward 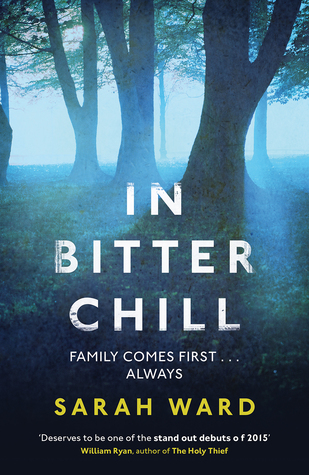 In 1978, a small town in Derbyshire, England is traumatised by the kidnapping of two young schoolgirls. One girl, Rachel, is later found unharmed but unable to remember anything except that her abductor was a woman.

Over thirty years later the mother of the still missing Sophie commits suicide. Superintendent Llewellyn, who was a young constable on the 1978 case, asks DI Francis Sadler and DC Connie Childs to look again at the kidnapping to see if modern police methods can discover something that the original team missed. However, Sadler is convinced that a more recent event triggered Yvonne Jenkins’s suicide.

Rachel, with the help of her formidable mother and grandmother, recovered from the kidnapping and has become a family genealogist. She remembers nothing of the abduction and is concerned that, after Yvonne Jenkins’s suicide, the national media will be pursuing her for a story once more. Days later, the discovery of one of her former teachers’ strangled body suggested a chain of events is being unleashed.

Rachel and the police must unpick the clues to discover what really happened all those years ago. But in doing so, they discover that the darkest secrets can be the ones closest to you.

In Bitter Chill is the debut novel of crime blogger Sarah Ward. She runs the very active Crimepieces blog where she reviews crime novels. She is also one of the judges for the Petrona Award for the best Scandinavian Crime Novel. All this gives her a very good grounding to write her own novel, and it has.

In Bitter Chill is a solid Debut. It is set in two timelines, the here and now and back in 1978 when the two girls were abducted.

What I liked about reading the 1978 timeline was (should I say this?!) remembering that time and smiling at some of the descriptions, for instance, one of the girls had a pair of long white socks where the elastic around the top was loose and they kept falling down and she had to keep pulling them up. I remember a pair of socks exactly like that! It was the small things like that in the book that made it very real and drew you in.

The story is set in rural Derbyshire and the setting is a character all of its own. It’s a beautiful place. You can picture it and feel it, the cold that Ward seeps in, the isolation.  It’s really well done and it’s where you can really see she has taken note of all the books she has been reading. (Remember my blog post about why writers should read?)

The two timelines weave together brilliantly and with Rachel, the girl who got away, having grown up to work as a genealogist the theme of family secrets and the past work well.

I imagine this is going to be a series because the police officers Sadler and Connie Childs had more to give and would definitely suit a series.

With thanks to the author and publisher for my copy of the book.