It was a busy meeting. The group is growing which is great to see. We even had Margot join us from the airport which I thought was amazing and goes to show the positives of having an online book club in that as long as you have an internet connection, you can join us from absolutely anywhere. So you will notice, if you watch the below video, some background noise. There was a great conversation about the book though.

The book split the group, some loved it and other members felt it had the feeling of having all been done before. The group loved the writing, sense of place and the protagonist and everyone said they would read the next in the series as they felt forgiving of a debut in a series.

You can watch the meeting below.

The next meeting is Wednesday 19th November at 8 p.m. GMT. The book chosen was Dominion by C. J. Sansom. 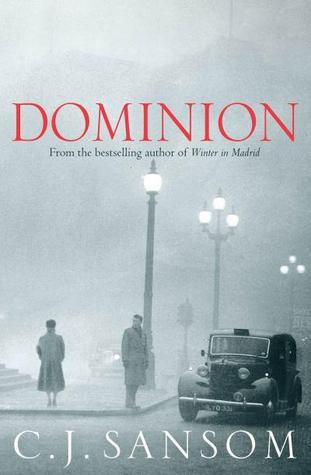 1952. Twelve years have passed since Churchill lost to the appeasers, and Britain surrendered to Nazi Germany after Dunkirk. As the long German war against Russia rages on in the east, the British people find themselves under dark authoritarian rule: the press, radio and television are controlled; the streets patrolled by violent auxiliary police and British Jews face ever greater constraints. There are terrible rumours too about what is happening in the basement of the German Embassy at Senate House.

Defiance, though, is growing. In Britain, Winston Churchill’s Resistance organisation is increasingly a thorn in the government’s side. And in a Birmingham mental hospital an incarcerated scientist, Frank Muncaster, may hold a secret that could change the balance of the world struggle forever.

Civil Servant David Fitzgerald, secretly acting as a spy for the Resistance, is given by them the mission to rescue his old friend Frank and get him out of the country. Before long he, together with a disparate group of Resistance activists, will find themselves fugitives in the midst of London’s Great Smog; as David’s wife Sarah finds herself drawn into a world more terrifying than she ever could have imagined.

And hard on their heels is Gestapo Sturmbannfuhrer Gunther Hoth, brilliant, implacable hunter of men . . .

And bookclubers, just so you are aware and leave yourselves enough time to read this, it has about 600 pages depending on the format you are reading on.

To keep up to date straight into your email inbox with what we are reading and when the meetings are sign up to the newsletter Here.