We had the fourth virtual crime book club meeting last night and again it was another good one. We read A RISING MAN by Abir Mukherjee.

I really enjoyed it. We had new members join – which is always good to see. It’s nice to see the group growing. Members fighting maybe a little anxiety about using new technology like Zoom to join us. It’s not all an easy ride. We had a few tech problems last night. Myself included. I had to log out of the meeting and restart it because I had no sound. Other members had issues as well last night. But all in all, it was worth it to catch up in a group and talk books. Something that is still difficult in the current climate. And with the book club, it means you can join whatever country you are in. There are no boundaries. We (I) are based in the UK, but we have US members. We even have an Australian member who gets up at the crack of dawn some months to join us! So, if you’ve been considering it, make August the month you join us. Sign up HERE if you haven’t yet signed up. (You need to sign up to get login details the day before.)

You can watch the meeting below. Be warned, if you haven’t yet read the book but intend to, there are spoilers contained!

Today we are also voting on the books for next months read. The theme for August is police procedurals. A couple of these books have been suggested by members. (If you attend the meeting, you are informed of the next month’s theme and asked if you want to suggest a book or author). I selected the rest. I tried to select books I didn’t think many of us would have read. So it will be good to try them. I did check and all books are available in the US as well as the UK and at sensible prices. (This has been a problem in the past.)

We also decided at the meeting that we were happy to read books that were later on in a series rather than starting right at the beginning of a series.

Voting starts now and will run until Friday evening. I will let you know the winning book at the weekend. The next book club meeting will then be on Monday 10th August 2020 at 8pm (UK timezone). I look forward to seeing what we’ll be reading next! I am interested in all of these books! In fact I think I’m going to have to put them on my TBR whether they win or not.

The Girl Beneath the Sea by Andrew Mayne 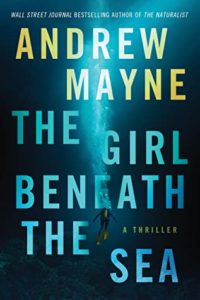 Coming from scandalous Florida treasure hunters and drug smugglers, Sloan McPherson is forging her own path, for herself and for her daughter, out from under her family’s shadow. An auxiliary officer for Lauderdale Shores PD, she’s the go-to diver for evidence recovery. Then Sloan finds a fresh kill floating in a canal—a woman whose murky history collides with Sloan’s. Their troubling ties are making Sloan less a potential witness than a suspect. And her colleagues aren’t the only ones following every move she makes. So is the killer.

Stalked by an assassin, pitted against a ruthless cartel searching for a lost fortune, and under watch within her ranks, Sloan has only one ally: the legendary DEA agent who put Sloan’s uncle behind bars. He knows just how deep corruption runs—and the kind of danger Sloan is in. To stay alive, Sloan must stay one step ahead of her enemies—both known and unknown—and a growing conspiracy designed to pull her under.

Find Her Alive by Lisa Regan 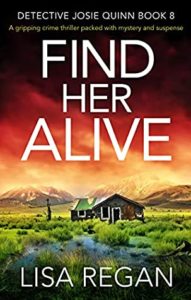 Detective Josie Quinn hasn’t heard from her sister since Trinity stormed out of the house in the heat of an argument three weeks ago. So, when human remains are found at the remote hunting cabin where Trinity was last seen, Josie can only assume the worst.

Gathering her team, Josie feels a surge of relief when the dental records match a different body – that of a missing single mother from a neighboring town. But now Josie’s is not the only broken family desperate for answers.

Dusting the crime scene for prints, a name smudged into the side of a nearby car is the first in a trail of clues Trinity left for Josie. In need of a big story to save her journalism career, it seems Josie’s sister was attempting to make contact with a dangerous serial killer known for creating sculptures with his victim’s bones. And Trinity won’t stop until she’s found him, even if it means becoming his next masterpiece…

Josie is certain there’s a critical clue in the ivory hair comb delivered to Trinity just days before she went missing. But as more bones surface, each set more likely to be Trinity’s than the last, time is running out to find her alive. Can Josie’s team trust her instincts in a case that is so deeply personal? Can she find her sister without putting other innocent lives in danger? 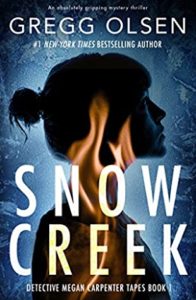 Footprints were scattered about like fallen leaves. She looked down into the ravine, and once more her lungs filled with fear. A body, blackened and motionless lay splayed out in the bushes.

Detective Megan Carpenter is no stranger to evil. Escaping the horrors of her old life, she’s vowed never to let anyone hurt her or those she loves ever again. Joining the small police force in Jefferson County’s Port Townsend, Megan is determined to get every victim of a crime the justice they deserve.

So when Ruth Turner walks into the Sheriff’s office claiming her sister Ida Watson has been missing for over a month, Megan’s instincts tell her that she needs to do more than just file a report.

Arriving at a secluded farmhouse in the hills above Snow Creek, she finds Ida’s teenage children alone and frightened.

Then a few days later, close to the Watsons’ home, the blackened body of a woman is discovered in an abandoned pickup truck.

Megan must unravel the disturbing secrets of the isolated Snow Creek community if she is to catch the killer.

But Megan has dark secrets of her own too…

Hidden in the back of her closet is a box of tapes containing every single recording of her therapy sessions with Doctor Albright over thirteen years ago. As Megan begins to play the tapes, she’s taken straight back to her terrifying childhood, back to the time she was a kid called Rylee, fighting to survive.

Can Megan finally confront the past she’s spent years trying to block out and will listening to her own painful story help her solve the complex case she is now entangled in? 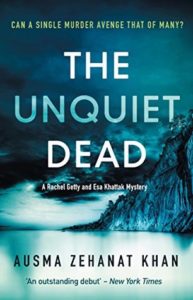 A complex and provocative story of loss, redemption, and the cost of justice that will linger with readers long after turning the final page.

Despite their many differences, Detective Rachel Getty trusts her boss, Esa Khattak, implicitly. But she’s still uneasy at Khattak’s tight-lipped secrecy when he asks her to look into Christopher Drayton’s death. Drayton’s apparently accidental fall from a cliff doesn’t seem to warrant a police investigation, particularly not from Rachel and Khattak’s team, which handles minority-sensitive cases. But when she learns that Drayton may have been living under an assumed name, Rachel begins to understand why Khattak is tip-toeing around this case. It soon comes to light that Drayton may have been a war criminal with ties to the Srebrenica massacre of 1995.

If that’s true, any number of people might have had reason to help Drayton to his death, and a murder investigation could have far-reaching ripples throughout the community. But as Rachel and Khattak dig deeper into the life and death of Christopher Drayton, every question seems to lead only to more questions, with no easy answers. Had the specters of Srebrenica returned to haunt Drayton at the end, or had he been keeping secrets of an entirely different nature? Or, after all, did a man just fall to his death from the Bluffs?

In her spellbinding debut, Ausma Zehanat Khan has written a complex and provocative story of loss, redemption, and the cost of justice that will linger with readers long after turning the final page. 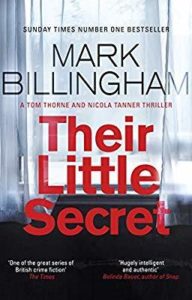 When DI Tom Thorne is called to conduct a routine assessment at the site of a suicide, he expects to be in and out in no time. But when he arrives at the metro station, where a woman named Philippa Goodwin threw herself in front of an underground train, Thorne inexplicably senses something awry and feels compelled to dig deeper. He soon discovers that she was the victim of a callous con-man who preys on vulnerable women, and whose deception plunged Philippa to her end. Thorne enlists DI Nicola Tanner to help him track down the swindler and bring him to justice. But the detective duo gets more than they bargained for when a young man’s bludgeoned body turns up on the shore of a nearby seaside town. The two cases come together in a way that neither of the detectives could have foreseen. Brilliantly plotted with a shocking psychological bent, Their Little Secret is another masterful thriller from one of Britain’s most beloved crime writers. With twists and turns that will keep readers guessing until the final page, this is Mark Billingham’s most chilling novel yet.

Unfortunately I’ve had to remove a choice (Stuart McBride) from the vote as there wasn’t an ebook version in the US (apologies, I thought I’d checked them all, but something moved me to check again.) and the paperback was expensive. Apologies. Luckily I don’t think anyone has voted for it yet. Apologies to Stuart as well!