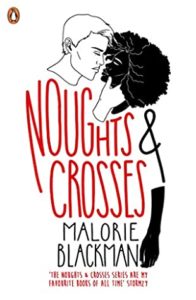 Sephy is a Cross: she lives a life of privilege and power. But she’s lonely, and burns with injustice at the world she sees around her.

Callum is a nought: he’s considered to be less than nothing – a blanker, there to serve Crosses – but he dreams of a better life.

They’ve been friends since they were children, and they both know that’s as far as it can ever go. Noughts and Crosses are fated to be bitter enemies – love is out of the question.

Then – in spite of a world that is fiercely against them – these star-crossed lovers choose each other.

But this is love story that will lead both of them into terrible danger . . . and which will have shocking repercussions for generations to come.

I am coming to this series late. It’s already a television series – which I have not watched. Not yet anyway. I “read” this book via audiobook. The way I tend to consume a huge majority of my books lately. Though I promise, I am still reading paper and ebooks.

I picked up this book before the events in the US happened but was still reading as they occurred and it was a timely read.

If you’re white you’re a nought, a blanker. Nothing in society. If you’re black, you’re a cross, you have everything, you are thought to be “above” the noughts in everything. Even in such things as education. Sephy and Callum don’t see things this way though. They’re kids and they see each other for who they are.

But do they? Can the pressures of society really allow them to be who they want to be? It’s tough when everything around them is built to tear them apart, to make them be something else entirely. It’s not at all accepting of anyone who wants to even bend the rules never mind break them and boy do these two want to break them.

It’s a heart-stopping read. It makes you think about a lot of things. But, it’s also a really good enjoyable book. I was so invested in these two characters. I loved Sephy. She was gutsy and determined even though she was so young – only 14 when the book starts – she’s older when it ends. And Callum, as the one who is downtrodden, you can feel his confusion. How he wants to do the right thing but how he is easily sidetracked.

Be warned, the book made me cry. And I am now desperate to read the next book in the series. It closes quite well. You could read it as a standalone, but knowing the story does continue, I’m so happy to see where it goes. To follow the characters wherever they go next.

Would I recommend this book? Absolutely yes!

Below is the trailer to the television drama that has been made of the book.