The Wall by John Lanchester 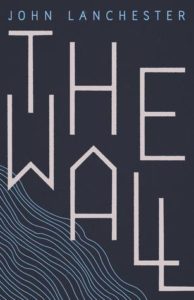 Ravaged by the Change, an island nation in a time very like our own has built the Wall―an enormous concrete barrier around its entire coastline. Joseph Kavanagh, a new Defender, has one task: to protect his section of the Wall from the Others, the desperate souls who are trapped amid the rising seas outside and are a constant threat. Failure will result in death or a fate perhaps worse: being put to sea and made an Other himself. Beset by cold, loneliness, and fear, Kavanagh tries to fulfill his duties to his demanding Captain and Sergeant, even as he grows closer to his fellow Defenders. A dark part of him wonders whether it would be interesting if something did happen, if they came, if he had to fight for his life.

This was an audiobook listen and I really enjoyed the experience of reading it by audio.

The Wall was a Booker longlisted book. A dystopian novel that feels pretty much of our time. It’s not a long read but fits in everything it needs to.

As the blurb describes, an island, much like our own, has a huge wall built around the entire coastline to prevent ‘The Others” from getting in. The Wall is defended by men and women called Defenders. They are conscripted from the public when they reach a certain age and have to do two years’ duty. It is possible to not be called up to be a Defender in certain circumstances. It’s not the best job. It’s cold and bleak. You work in twelve-hour shifts, days and nights, and if Others overcome your section of the wall and they make it over, you are then put out to sea to keep the number of people on the island the same.

We follow Kavanagh from his first night on the Wall. Feel his cold. The numbness and isolation. But we also feel the camaraderie between Defenders. They are in this together. No one else knows what it’s like other than other Defenders. They don’t understand the utter freezing temperatures and they don’t understand the fear of Others making it over and your life changing completely. It would be a boring book if all that happened was that Kavanagh guarded the Wall. Others come. The Defenders have to fight for their lives. In all senses of the word. To live and not allow anyone over to the other side. Because if anyone gets over then they’re put out to sea. Not drowned. But put out into the vast ocean in a boat with a few supplies and made to live out there for the rest of their lives.

The book makes you think about who you are and who Others are. It doesn’t fully explain the set-up in the book and it’s up to you to fill in the blanks. But, in a world where people are arguing over borders, it felt a timely read. I’d definitely recommend it.