I know it’s been quite a while since I blogged and I feel bad about that. I’m not really sure what happened. It started in the summer. I went away and the blog went by the wayside. I returned from holiday and was busy working and along with managing ill-health I never seemed to manage to fit in time to blog again. But, I did miss it. I missed talking to you. I missed writing that wasn’t novel writing. I’ve eventually pulled up the blog admin page, logged in and here we are. So, to start off I thought I’d do something gentle, a post about what I’ve read recently.

A Deathly Silence by Jane Isaac 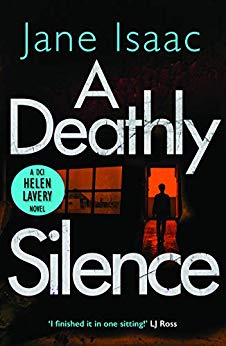 When the mutilated body of a police officer is found in a derelict factory, the Hamptonshire police force is shocked to the core.

DCI Helen Lavery returns from injury leave and is immediately plunged into an investigation like no other. Is this a random attack or is someone targeting the force? Organised crime groups or a lone killer?

As the net draws in, Helen finds the truth lies closer than she could have imagined, and trusts no one.

But Helen is facing a twisted killer who will stop at nothing to ensure their secrets remain hidden. And time is running out…

To start with I will disclose that Jane is a good friend of mine and I read A Deathly Silence as one of her early readers. I was honoured to do so as it’s a brilliant book. It’s the third book in the DI Helen Lavery series and I’m a fan of the whole series. It’s been a while since Helen Lavery made an appearance though and it was good to see her back in action.

Helen is shocked when she’s called to a crime scene and finds it’s one of their own. A police officer dead in a derelict factory. She’s determined to find out what has happened and from here Jane leads you on a tense journey that peers inside the dead officer’s life and the possibility that this wasn’t a random attack. The location of the body is strange. There’s no reason the officer should have been found there. So many unanswered questions.

I flew through this book as Jane is so good at weaving an intriguing story. She cleverly lays down the clues but does it so subtly if you’re not watching closely you might miss them. I was on the edge of my seat as I turned the pages right until the shocking denouement which I really was not expecting. If you like your police procedurals twisted and cleverly plotted then this is definitely the book for you. It reads well as a standalone and can be read without reading the rest of the books in the series. If you want to start reading Jane Isaac, this is a great place to start.

You can pick up A Deathly Silence HERE.