I’m pleased to welcome Peter Laws to the blog to talk about his first draft process today. 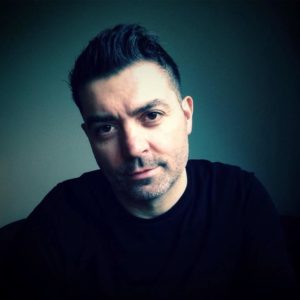 Peter Laws is an author, journalist, film critic and public speaker. He is the creator of the Matt Hunter novel series. The first of which, ‘Purged’, was released in February 2017. He’s an ordained Reverend in the UK Baptist denomination with a fascination for the macabre.

He writes a monthly column for the print magazine The Fortean Times and also hosts the popular podcast and YouTube show The Flicks That Church Forgot which reviews scary films from a theological perspective. His non-fiction book The Frighteners hits shops in 2018.

He regularly speaks and preaches at churches and events.

Choose the music. I’m kind of obsessed with film soundtracks, and I don’t mean song albums like Grease or Reservoir Dogs. I mean instrumental scores. So I put together a playlist of score music that fits the mood of the book, and it can sometimes change depending on the mood of the chapter. I also have an app called Ambiance on my MacBook that has sound effects on demand. So it it’s a rainy scene, I’ll cue up the storms in my speakers. Odd I guess, but it works for me.

I almost always sit and piece together a skeleton plot. At least something that has a semi structure and feels like it will work. It’s once that’s in place that I expand on that a little. Then I write the actual first draft, which can change and alter the original plot as much as needed. But I just prefer to know there’s a vague direction I at least could go in. 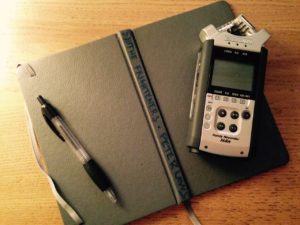 Both. I keep a little notepad which I write ideas on, as well as interesting ‘beats’ or phrases that I read in other books. Things like ‘He sucked on the stem of his glasses.’ I record that stuff because I think I want to put something like that somewhere in the book. But the notepad stage is very brief (and I do a lot more of it on the Evernote phone app now). Before long I’ll be straight in front of my MacBook falling into the world itself.

I’m known for writing the Matt Hunter crime fiction novels, about an ex-church minister turned professor who helps the police solve religiously motivated or cult related crime. I do a fair bit of research for those, but it’s nowhere near the same level as I did for my non-fiction book called The Frighteners, which comes out next year in the UK and US. That’s about why people are drawn to the morbid, macabre and spooky and has involved me trekking across the world hunting werewolves, interviewing vampires, staying in haunted hotels, being chased by zombies, holding serial killers hair and other crazy stuff. So naturally, the non-fiction has STACKS of research, which is great fun. But it also slows the writing process down. It’s a very different rhythm to fiction writing.

I read a bunch of books with my highlighter pen and biro. It’s one of my favourite stages of research. I know some people hate the idea of writing on books, but I love it. Me, in a coffee shop…with some creepy soundtrack playing in my ears while I circle ideas and concepts that grab me. Brilliant. Then if it’s hands on stuff and experience based I go contact people and arrange press passes etc for various things. I’m off to the National Archives in a few days to double check the last words of a murder victim. It’s a pretty important element to my non-fiction chapter on ghosts, but I don’t want to rely on the article I saw online. I need to have the original file in my hand to confirm it really said what it said. I also have a great field recorder for audio (I use it for my podcast and YouTube channel). When I’m interviewing I almost always have that running so that I can write what the people said from their words, and not my own memory.

Mostly on my MacBook which I backup to an external hard-drive and the cloud. I also keep a file with papers in.

With novels I just go for it. Fuelled by soundtrack music, I dive headlong into the world and I don’t wait around for inspiration. Brian Clemens, the creator of The Avengers and some cool horror movies, told me once that the secret to writing was ‘Arse to chair, pen to paper.’ So I tend to do that. I’ll press ahead with the draft and aim to complete it rather than stopping it and starting something new. The task is to finish the draft, and not worry too much about tiny issues here and there. I’ll fix them later.

I need tea and lots of it. I also prefer moody lighting. I don’t like the idea of writing in a kitchen filled with fluorescent light. I want to feel cosy and warm. If there’s a storm outside, more the better. I lit a candle once, but it burned through one of my cables so I ditched that idea quickly. It lamps all the way.

I also write a fair bit in coffee shops, which I like because it feels like a workplace and yet isn’t quite. Headphones are essential in that environment!

I’m pretty much lost in it, and when I come up for air it’s like the world around me might even be part of the world I’m writing. I find that particularly after writing a scary chapter. My latest crime novel Unleashed explored poltergeists, demons and ghosts and I wrote a lot of the frightening scenes at a country pub at night. Coming out into the darkness of the carpark, and seeing all those pitch black fields around me made me think I was still in the book world. Which was cool.

When I’m working out it’s a pub or coffee shop that feels cosy. At home, it’s a desk surrounded by huge framed posters of drive in horror, thriller and sci-fi movies from the 70s. It’s pretty geeky, I guess. 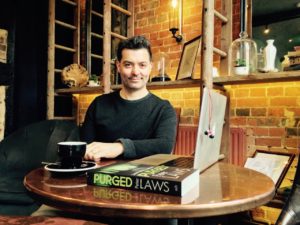 I do a fair bit of editing as I go, just to make sure it makes sense, but as I said earlier I don’t allow myself to get hung up on smaller details like making certain sentences work. If I feel a sentence isn’t working I’ll get to it later. On the whole it’s getting that story out.

I sometimes notice word count but for me it’s about time. My wife works full-time, so I do the lion’s share of the child care for our two young children. So I’ve worked solidly while they’re at school or pre-school and then maybe do some more on the evening. I also go away for weekends to hotels and monastaries to get more writing time in. So for me time is the measure…i.e. did I use the hours actually working on the draft? I tend to find I get a lot done with that method, but I don’t like the idea of feeling like a failure if I don’t hit a certain word target. Sometimes the time might be spent on slowing down and thinking through a plot point which is vital to the process. So even though the word count might be lower it’s still working.

I’d say the first draft takes anything from three to five months. Then I give it a rest for a month and dive back in with the editing. In all I tend to write a book (both fiction and non-fiction) in about a year (though there has been crossover lately since three of my books came out in a short space of time (18 months).

I read it back through the screen, but I also have an app that speaks the document to me. I find that to be really helpful, as I can be going for a run or cleaning the house and am hearing my work back. Sometimes it’s one of the best way to spot errors or clunky writing.

I have that break for a month so that I don’t think about the book at all. I try to chill out during then, but it’s a good time to catch up on writing my magazine column or my YouTube Channel. I also speak a lot at churches etc (Other than being a horror/ crime writer I’m also an ordained church minister). I find that break from the first draft is key to seeing if it’s worked. I go back to it and read it with a fresh eye, and sometimes it means I’m willing to drop whole sections which I couldn’t have bared to drop earlier. 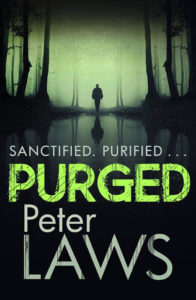 Matt Hunter lost his faith a long time ago. Formerly a minister, now a professor of sociology, he’s writing a book that debunks the Christian faith while assisting the police with religiously motivated crimes. On holiday with his family in Oxfordshire, Matt finds himself on edge in a seemingly idyllic village where wooden crosses hang at every turn. The stay becomes more sinister still when a local girl goes missing, followed by further disappearances. Caught up in an investigation that brings memories to the surface that he would prefer stay buried deep, Matt is on the trail of a killer determined to save us all.