We have another great First Draft Q&A today, with Rose Fischer taking the hot seat. 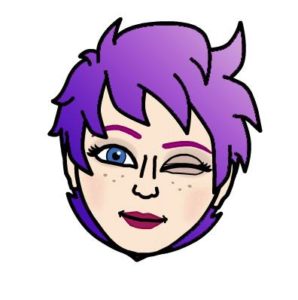 Rose is an avid fan of foxes, Stargate: SG-1, and Star Trek.  She would rather be on the Enterprise right now.

Since she can’t be a Starfleet Officer, she became a speculative fiction author whose stories feature women who defy cultural stereotypes.

In her fictional worlds, gender is often fluid, sexuality exists on a spectrum, and “disability” does not define an individual.  She publishes science fiction, science fantasy, horror, and biographical essays.

When I get an idea, I don’t do anything. I let it sit and percolate for a while before decide what to do with it. Eventually, I open up WordPad and write out everything I can think of about the idea and what I might want to do with it.

Every story or project is different for me. I don’t have a routine per se, but I do have some general principles that guide how I create.

Firstly, if I’ve decided to start a writing project, that means I’ve also decided to finish it. There’s no option for \giving up halfway or starting over 13,000 times.

A first draft is for practice and getting ideas down. The goal of the draft is to get a complete story, beginning, middle, and end, into written form.

Nothing has to be chronological, and it doesn’t even have to be prose, but it needs to be finished before I start over.

I keep showing up, no matter what, even if I take a few days or weeks off, I’m not going to let that draft sit and languish for months.

I have cerebral palsy and it’s not feasible for me to write on paper. Everything I do is digital.

Research is extremely important to me, but not for the first draft. The first draft is focused on getting my ideas down and shaping the story. If there are any subjects that need more research or things that I don’t know/don’t remember, I put a note in my draft file, and I have a separate document where I list out questions and topics for research.  If something is so important that I have to stop writing to figure it out, I give myself a time limit and figure out as much as I can, then I go back to writing.

Once I’ve finished the first draft, I look through my notes for any research topics that are still relevant. A lot of them will turn out not to be by the time I’m through.  Then the specific research process depends on what I need to know. It can include seeking out and talking to people who know more than I do about the subject, reading books, finding information on the Internet, or if possible visiting places that appear in the story. For the most part, I base my stories around subjects that I already know enough about that I feel comfortable writing a first draft. When I need more research in the second draft, I’m usually familiar enough with the subject matter to figure out where and what I need. If something comes up that I’m completely unfamiliar with, I seek out people who can help me find the information that I need and give me context. My research is guided by the principle of finding out as much as I need in order to answer my immediate questions and writing down lists of anything else that comes up that may not be directly relevant. Sometimes there’s a topic that just keeps pulling me toward it, and I take a break to explore further. It usually turns out to be relevant and I add it, but in those circumstances, again, I give myself a time limit of how long I’m going to spend on that subject. I make another research pass in the third draft to fill in any gaps and make sure everything is coherent.

I have a computer folder for each project that holds notes, my scapple spreads, and links to various materials from the internet.  Later on when the project is more formed, I create a story Bible.

Like I said before every project is different, but generally I start by writing out every idea that I can think of in a Word document and then organizing them in Scapple.  Then I alternate between writing out some preliminary scenes and working on a story map and character profiles.

Not really. I’m not superstitious, and I really find rituals to be confining.  Any time I “have” to do something, it becomes a chore.

I can get in the zone for a few weeks and basically do nothing but write, but I don’t think writing is magic, and I don’t think of the process as anything other than showing up and putting my ideas on the page.

I do a few line edits here and there, and make a little bit of developmental changes, but anything that takes more than 10 minutes just gets noted for later.

My writing goals are based around completed sections of story, and I try to do one per week.  (I don’t say “chapters” because I don’t know how the story’s going to be structured in the first draft.)  But if I know that I want Character A to decide to leave home, then section 1 would be “Get Character A to leave home.”  I try to do one or two per week, and they’re based on my goals for the characters and plot.  I do keep track of my word count, because I participate in online writing events and it seems like that’s the main metric people use, but I don’t really understand the point.  2/3 of my”words” are going to be deleted by the time I’m done, so I don’t see it as any kind of accomplishment that I can write 3-5k words a day.

Already answered this, but everything I do is on the computer.

I put it aside for a while and work on something else.  Eventually, I read through it and make notes for revision by scene.  Then I work through another developmental pass, and a technical pass.

Thanks for taking the time to answer these questions, Rose! 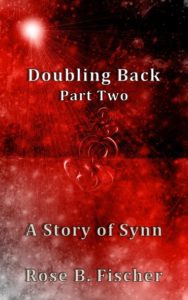 Aldra Malimore is having a horrible day. All she wants is to track the mercenary who’s been intimidating her friends. But she’s been sucked into a bar brawl, hit in the head, discovered magic poachers are targeting foxes in Arcanion, and things only get worse from there! Can she rescue the poachers’ latest victim and find a way to stop the mercenary?

In this final installment of the Foxes of Synn Summer serial event, science and sorcery lead the foxes to new discoveries and Aldra to a new beginning.