I’m thrilled to bring the first draft Q&A back and with a great crime writer at the helm, Catherine Ryan Howard.

Her debut thriller, Distress Signals, is out now in the UK, Ireland, Australia and New Zealand (Corvus/Atlantic) and the USA (Blackstone). An Irish Times and USA Today bestseller, it was shortlisted for the Books Are My Bag Crime Novel of the Year at the Irish Book Awards 2016 and won Best Mystery at the Independent Press Awards 2017 (USA). It was picked as a ‘Rising Star’ Best Debut by Amazon UK and has been optioned for television by Jet Stone Media. In May 2017 it was longlisted for the CWA John Creasey ‘New Blood’ Dagger.

Catherine started her writing career self-publishing non-fiction – two light-hearted travel memoirs, followed by the obligatory ‘how to’. She became known for dispensing particularly pragmatic self-publishing advice, speaking on the subject for the likes of Faber Academy, the Irish Writers’ Centre, Guardian Masterclasses and others. But her goal was always to write crime fiction and to get published.

Catherine is currently working on her second thriller and preparing for her final year studying for a BA in English Literature at Trinity College Dublin.

The first thing I do is write what I would imagine the copy on the back of the book would be, essentially a very short synopsis that just teases the ending. This may only been a couple of hundred words, but I think it really helps you figure out if you actually have a story or not. For example, when I did this with the book that became Distress Signals, I had something like, ‘Adam’s girlfriend goes missing and he traces her to a cruise ship in the Mediterranean.’ Well, big whoop. Clearly, I needed something else, some kind of rocket booster, that would make readers think, ‘Oooh, that sounds interesting!’ So I added that a few days later, he receives her passport in the mail with a note that says ‘I’m sorry-S’ (her name’s Sarah)… and then he meets a man whose wife disappeared from the same ship a year earlier, and that man received her passport with a note that said, ‘I’m sorry-E’ (her name was Estelle). Writing the blurb for the back of the book is what led me to come up with that plot point, because I knew the story needed more.

Not at all. I wish I did. I just try to start with a very messy draft, for my eyes only, where I tell myself the story and see if it works out. The second draft is the first proper one. I’m a master procrastinator and a binge-writer, so I don’t write all the time but when I do, I do almost nothing else.

I think research is a bit of a double-edged sword. You can get bogged down and for a procrastinator, it’s just another form of delaying the inevitable. Plus I don’t believe that fiction has to be 100% accurate – it only has to be believable. You don’t want anything so ‘wrong’ that it yanks the reader out of the story, but I think as a fiction writer you’re allowed a little leeway.

I believe in the writing advice ‘write what you know’ but I take it as ‘use what you know’. I’ve never worked on a cruise ship, but I did work in a 2,000 room resort hotel as a housekeeping supervisor, and cleaning cabins is the same as cleaning a guest room, so I used my knowledge of that in the book for my character whose a cabin attendant. I also spent a lot of time in Nice and Villefranche on the Cote d’Azur, so that went into the book too – that’s where the Celebrate, my fictional cruise ship, stops. In terms of research I had to go out and do, that mainly centered on maritime law and cruise ship deaths and disappearances, which was mostly done online.

Usually I keep one MS Word document where I just chuck everything – ideas, images, links – and then when it comes to planning or writing, I dip in there and take what I need.

Quickly but messily! I love Blake Snyder’s Save the Cat, so I tend to start with the major beats in the story: beginning, end, midpoint, inciting incident, ‘Fun and Games’ (the promise of the premise), low point, etc. I have them worked out and then I just start writing. The first draft for me though is where the good ideas really come from. Sitting down with a notebook and a cup of coffee just doesn’t really work for me. The best ideas come from the writing process itself, so although the first draft is very messy and probably nonsensical and disjointed, by the time I finish it I know exactly what’s going to happen in Draft 2.

I have to have coffee (obviously!) and a good block of clear time ahead of me.

I’m lost. I don’t want to have to go see anyone, or talk to anyone, or answer emails. I want to be locked away, undisturbed – mainly because I’m so easily distracted!

Very, very nice because I just did a bit of redecoration! Although I think it’s a bit pink for a crime writer. 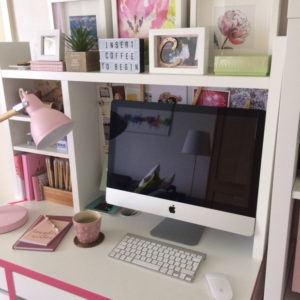 I try not to edit as I go and write ‘as if’ – if I decide, half way through, that I’m going to change what happens at the start, I try to continue on as if I’ve already done that instead of going back to change it before I move forward again – but I’m only successful at that about half of the time.

I have a calendar on the wall, the type with big boxes for the days, and I usually write my word count in there. I think it’s really motivating to see the words build up – and sufficiently guilt-inducing to have to write a zero in there if you don’t do any! 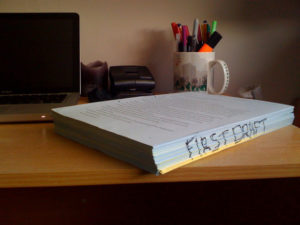 I’ve only written two novels so it’s hard to say how long it takes, but usually not that long, maybe three months. It is in terrible shape though. It probably can’t be read like an actual book. But the good news is I now know whether or not my story works, I know what actually happens, I know whose story it is, etc. etc. and I’m rearing to go on Draft 2!

I use my Kindle.

I catch up on my reading, Netflix, emails etc for a few weeks and then it’s time to dive into Draft 2! 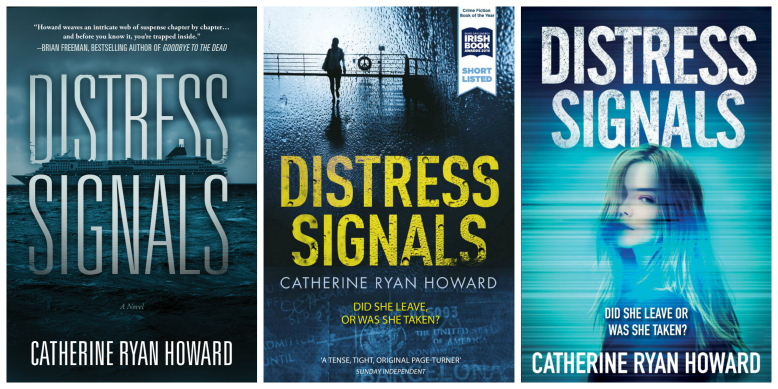 The day Adam Dunne’s girlfriend, Sarah, fails to return from a Barcelona business trip, his perfect life begins to fall apart. Days later, the arrival of her passport and a note that reads “I’m sorry–S” sets off real alarm bells. He vows to do whatever it takes to find her.

Adam is puzzled when he connects Sarah to a cruise ship called the Celebrate–and to a woman, Estelle, who disappeared from the same ship in eerily similar circumstances almost exactly a year before.

To get answers, Adam must confront some difficult truths about his relationship with Sarah. He must do things of which he never thought himself capable. And he must try to outwit a predator who seems to have found the perfect hunting ground …