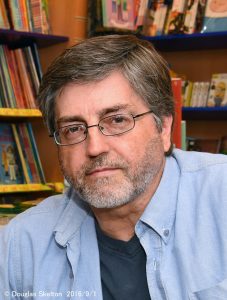 Douglas Skelton is the author of 11 true crime/Scottish criminal history books, four titles in the Davie McCall series and now the Dominic Queste thrillers, the second of which – Tag – You’re Dead – will be published by Contraband in April. His final Davie McCall book, Open Wounds, was nominated for the McIlvanney Award in 2016.

Everything’s there. Well, more or less. I’ve taken it from A-Z, the spine of the story is there, the characters, much of the dialogue. I don’t have gaps – I tend to write in linear fashion and don’t jump sections. There will, however, be segments that will be cut.

Take a deep breath. Then a drink. Then I read it through once, take some notes. I don’t print it up yet – that’s done after the second, maybe third, draft.

Instinctively. I don’t have a particularly cerebral approach to what I do, it’s all by gut. Most writers know when something is just not right. Although sometimes we think something is wonderful and really, it’s not.

Hell, no! I can be fairly objective, although that doesn’t mean I don’t cling to material that my editor will later gently prise from clammy hands.

The spine of the story. William Goldman once wrote that once you have that everything else is fixable, and I think it’s great advice. As long as it’s intact, everything else can be moved, sliced, added to, turned into English.

None at all. I’m a tough Scot and don’t hold with such things. Touch wood.

All on screen until it’s printed up further down the line.

It’s patchy. Some areas can be left as they are, others go all General Maximus Decimus Meridius and unleash hell.

It’s more playing keep or chuck. As I say, as long as I’m satisfied the story progression is what I want then it’s more a matter of making sure I don’t slow down the pace – for me pace is vital – that I like the dialogue and am satisfied with the characters.

In the first Davie McCall book, Blood City, I decided not to kill off a character I’d planned to kill off from the beginning. That character made it to the second book before the end came.

I try not to put myself under pressure at all. I prefer to let it flow, so some days I’ll do very little but others it really works. As long as I complete it within a time frame I’ve already set, I don’t sweat the day-to-day stuff.

I much prefer revision. It can be easier. Pulling the material out of thin air to fill that blank screen is hard.

I’m getting on now so I limit myself to one cup of tea and two coffees during the day. At night the whisky comes out!

I can take up to three months, sometimes longer, to get the first draft down. The second draft will be completed in two/three weeks if I’m on a roll. After the second draft it’s almost there but being me I will think of new lines to add in. After that the revision of a printed copy will throw up how much repetition there is and some fairly horrendous spelling and grammar. And how much repetition. Maybe I should’ve printed this out.

Thanks for taking the time to answer my questions! 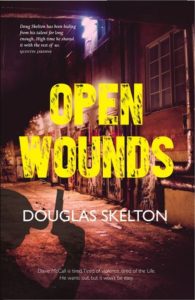