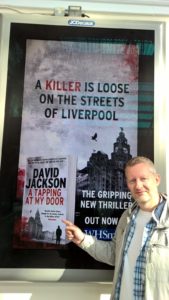 Today I’m really thrilled to welcome crime writer David Jackson to the blog. Dave is a friend and he’s also one of my favourite authors. If you haven’t yet read his work, you really should try it.

This is also a special First Draft post as it’s the final set Friday post by a guest author. Any further First Draft posts will be slotted in at other times. The new feature of Revisions posts, looking at the authors revisions process, once the first draft is done, will be starting shortly. But look out at the end of this post for another short announcement.

Back now, to Dave, our final first drafter…

David Jackson’s first novel, PARIAH, was Highly Commended in the Crime Writers’ Association Debut Dagger Awards, after which  he was quickly signed up for a publishing deal. His fourth book, CRY BABY, went straight into the top 10 of the Amazon Kindle bestsellers, and was subsequently listed as one of the Amazon Best Books of the Year. His latest novel, A TAPPING AT MY DOOR, is the first of a new crime series set in Liverpool, where David works as a university lecturer.

I try to nail down the idea. Usually, I’ll have something nebulous that’s been floating around in my head for ages. Now is the time to think it through properly, to reassure myself it can be made to work, and to turn it into a proper story.

I have a fairly lengthy planning stage, where I don’t do any actual writing, except to make notes. The notes aren’t substantial, either; I just need to think a lot. For me, beginnings are easy, so I tend to start with the ending. I like to have a major twist at the end, so I’ll put a lot of effort into getting that right. Then I’ll work on the middle. This is usually the tough bit. I know I need to get from A to Z, but that’s often easier said than done. I tend to ask myself lots of questions about the plot, and then spend days working out the answers. I love the feeling of coming up with a solution that I know is just right. 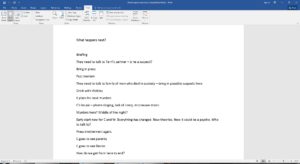 At the planning stage I’ll sometimes use pen and paper; in fact, I scribbled down the whole plot of my next novel while lying on a sunbed on holiday this summer. I’ll also enter notes on my mobile phone – perhaps on the train or when I’m in bed. For the actual writing of the novel, though, it’s always straight onto the computer for me.

To be honest, it’s never the top priority. I’m far more interested in story and character. Obviously, there will be facts I need to check, and things I need to learn about, but these tend to be driven by the needs of the story.

It depends what it is I’m researching. If it’s a location, I’ll go there, usually with my GoPro to film it. For other stuff, I’ll do a lot of reading and a lot of online searching. I’m also not afraid to ask questions of people who know a lot more than I do. This is especially useful for the policing element of my books: you can’t beat talking to a real copper for finding out exactly how things should (and shouldn’t) be done.

Most of it gets filed in my brain, as I’m pretty good at retaining information I regard as important (although I’m less good at remembering mundane stuff, like switching on the washing machine!) Other than that, I rely on technology. As I mentioned above, I’ll make videos of locations, and I have a digital voice recorder for conversations and interviews. A mobile phone is terrific for jotting down notes or taking snapshots of interesting scenes and objects. I also tend to make lots of bookmarks of relevant web sites I’ve found.

Actually, I only do one draft, which is something I’m reluctant to admit since people keep telling me that the secret of writing is in the rewriting. I start at the beginning and I work right through to the end. Aside from a little tweaking when I’m done, that draft is what I send off to my publisher.

I need a computer, relative silence, and a brain which isn’t too frazzled.

I’m easily distracted, and I tend to procrastinate, but once I’m in the zone I can really get lost in it. Those are the times that I really love writing.

Messy. Our loft has been converted to give me a small study. It’s great for escaping from the world while I write, but I’m terrible at keeping it tidy. The requirement to take a photo of it for this blog post has given me the impetus I needed to clean it up. 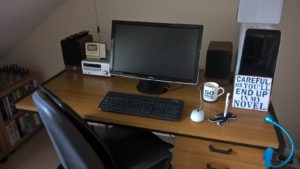 I keep getting the words out, but generally what I type tends to be in its final form. I never go back over the previous day’s work to fix it.

I look at the word count, but not on a daily basis. Because I have a full-time job, I’m not able to write according to a schedule. Many a day goes by where I don’t produce a thing. Instead, I work out roughly how many words I need to produce per month, and if I start falling behind I’ll force myself to put in some more hours.

Bearing in mind that my first draft is my only draft, I usually give myself a year, because that’s what my contract stipulates, and I find that my work usually expands to fit the time available. That said, I completed the sequel to ‘A Tapping at my Door’ in only seven months.

Computer screen. I hate working with reams of paper.

I send it off to my agent and publisher. I should point out that just because I think only one draft is needed, it doesn’t necessarily follow that they will agree!

And thank you, Rebecca, for giving me the chance to occupy the final slot in what has been a fascinating series of articles!

A Tapping at my Door 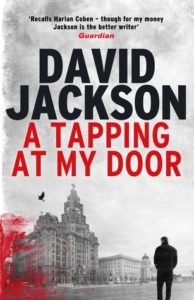 From the bestselling author of Cry Baby, the beginning of a brilliant and gripping police procedural series set in Liverpool, perfect for fans of Peter James and Mark Billingham

“Recalls Harlan Coben – though for my money Jackson is the better writer.” Guardian

I do hope you’ve enjoyed the First Draft series as much as I have. A long time ago, when they first started, I was asked why I hadn’t done the questions. Well, at the time I had only written Shallow Waters and that was a finding my feet process. So, now, as I close the door on the series as a regular slot, I think it’s time I answered my own questions, so next week, I’ll be in my own first draft hot seat. Stop by if you want to see inside my own writing process.

But, from me, I want to thank all the authors who have taken time out of their busy schedules to do these fascinating Q&As. I have enjoyed and learned from them and I am grateful to each and every one of them.

You can read the entire series Here.