Today I welcome Peter Bartram onto the first draft hot-seat. 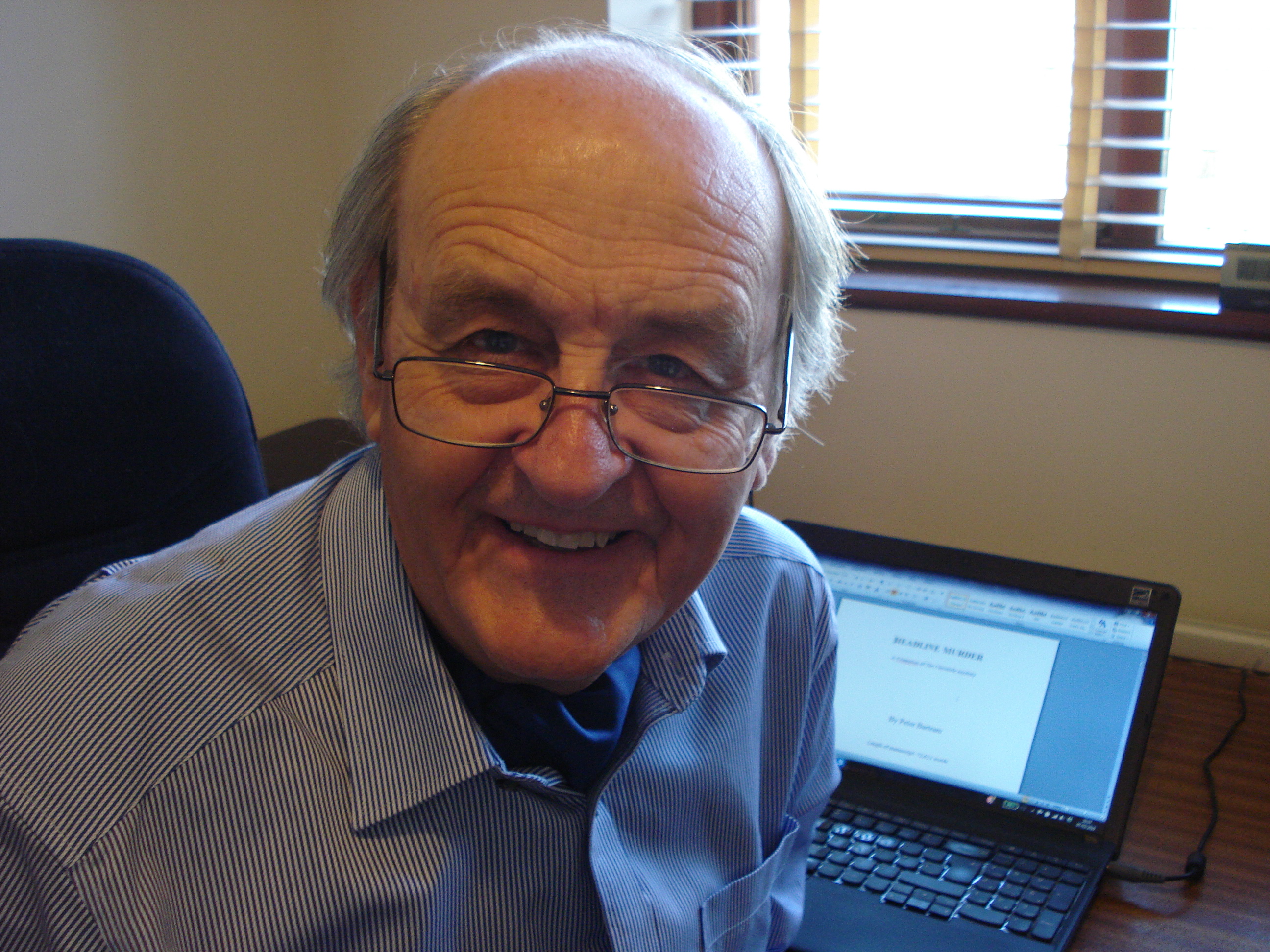 Peter brings years of experience as a journalist to his Crampton of the Chronicle crime series – which features crime reporter Colin Crampton in 1960s Brighton, UK. Peter has done most things in journalism from “door-stepping” for quotes to writing serious editorials. He’s interviewed cabinet ministers and crooks. (The crooks are more likely to give an honest answer, he says.) He’s pursued stories in locations as diverse as 700 feet down a coal mine and a courtier’s chambers at Buckingham Palace. He’s covered proceedings in Parliament and handed over tip-off money stuffed in brown envelopes to contacts in Fleet Street pubs. Peter wrote 21 non-fiction books, including five ghost-written, in areas such as biography, current affairs and how-to titles, before turning to crime – and penning Headline Murder, the first novel in the Crampton series. As an appetiser for Headline Murder, Peter has written a collection of short stories – Murder at the Chronicle – published as a Kindle e-book. Peter’s versatile range of work includes a radio play and a magazine serial. He lives near Brighton, UK. He is a member of the Society of Authors and the Crime Writers’ Association.

I generally cartwheel around the room because I’m so pleased I’ve had a fresh idea at last. After that, of course, I need a nice sit down so that I can think out how to realise the idea in the best way possible. If it’s a short story, I’ll think about how to make the idea fit into a couple of thousand words or so. If it’s a novel, I’ll focus on what the end-game of the idea would look like. The big question is: where is this idea heading and how do I get there?

And I get there by taking a number of steps. I plan a novel in scenes rather than chapters. I’ve spent a lifetime as a journalist so I’m used to Kipling’s “six honest serving men” questions – what, who, where, when, why and how? As I’m planning the scenes I’ll work out what’s going to happen, why it’s happening, who’s involved in the scene, when it happens in the narrative and generally where it will take place. But often I won’t work how it’s all going to happen. I might leave that for when I come to write – because then I’ll have something fresh to bring to the scene as I write it. But by answering the other five questions scene by scene I end up with a clear road-map of how the plot is going to work. Headline Murder, the first of the Crampton of the Chronicle novels, had 68 scenes and the second book – I’m still racking what left of my brains for a title – has 72. A scene could turn out at anything from 250 to 3,000 words.

Keyboard, natch! Of course, when I started in newspapers, it used to be a typewriter. There’s a little story there. When I was interviewed for my first ever job as a newspaper reporter, I was asked whether I typed. Of course, I said “Yes”. I mean, how hard can it be? All the keys have little letters on them. When I was shown to my desk in the newsroom on the first day I was horrified to find that my typewriter was so old it had probably been used to bat out news of the Titanic sinking. All the letters on the keys had worn away. The only way I could find which key belonged to which letter was to press it and see which typebar came up! It’s a great way to learn in double-quick time how to type.

The hero of the Crampton of the Chronicle series is a reporter – so in a sense I’ve spent the last 40 years doing research simply by being a journalist. The series is set in the 1960s and I started my newspaper career in the Swinging Sixties – so my personal memory bank handles that. And the books are set in Brighton and around. I’ve lived in the area all my life – so that’s covered. But obviously little niceties do crop up – such as how to cut someone’s throat in a way that ensures they die. It’s amazing what you can find out on the internet. And if that fails, my years in journalism have provided me with a contacts book with hundreds of names in it.

I write a brief description of each scene in about 50 words. So I start with a 3,000 to 4,000 word document which guides me – and I’ll put the document in a ring binder. Other material I research from the Internet, books and sometimes interviewing people. For example, for the current book I’ve been looking into how those What the Butler Saw machines you used to see on seaside piers work. I’ll keep a ring binder full of notes I’ve made, stuff I’ve printed out, and other unconsidered trifles that have come to light.

I start with my roadmap of scenes and start writing them from the beginning. It’s as simple as that. I try and write at least one scene at a sitting. Sometimes, if it’s an especially long scene, it might take two sittings. As each scene is finished I print it out single sided and put it in another ring binder. (Perhaps I ought to buy shares in a company that makes ring binders.) But there’s method in my madness. As I’m writing I sometimes think of another idea I hadn’t originally included in the scene plan. Often that means making an adjustment earlier in the manuscript. I can turn to my trusty ring binder, flip back to the point in the narrative and make notes on the blank left-hand page about the changes I will ultimately make to the text displayed on the right-hand page.

As a journalist, I’m used to getting up, sitting down at my desk and starting work. You don’t have time for writers’ block on newspapers and magazines. In that sense, writing has always been a job for me – my family’s only source of income for more than 40 years. But, I hasten to add, it’s a job that I thoroughly enjoy. Usually I work from nine in the morning to five in the afternoon with two hours for lunch. But that work will include my journalism as well as crime mystery writing.

Unfortunately – or, perhaps, fortunately (whichever way you look at it) – the outside world is ever-present. Besides writing the crime mysteries, I’m still a working journalist. So the inbox is pinging with messages every few minutes and the phone rings. But as a journalist you get used to handling several different stories at the same time. So if I treat the novel as just another story, the interruptions don’t seem too important. But it has been a joy over what little summer we’ve had, to sit in our summer house and just concentrate on the book.

I sit in a ground-floor room looking out over the garden. The beach is about 100 yards away. As I look around my office, I can see, inter alia, three book cases with a couple of hundred books, a glass paperweight, my radio (tuned to Test Match Special), a cricket ball, a fly swat and a wooden elephant with a missing tusk. 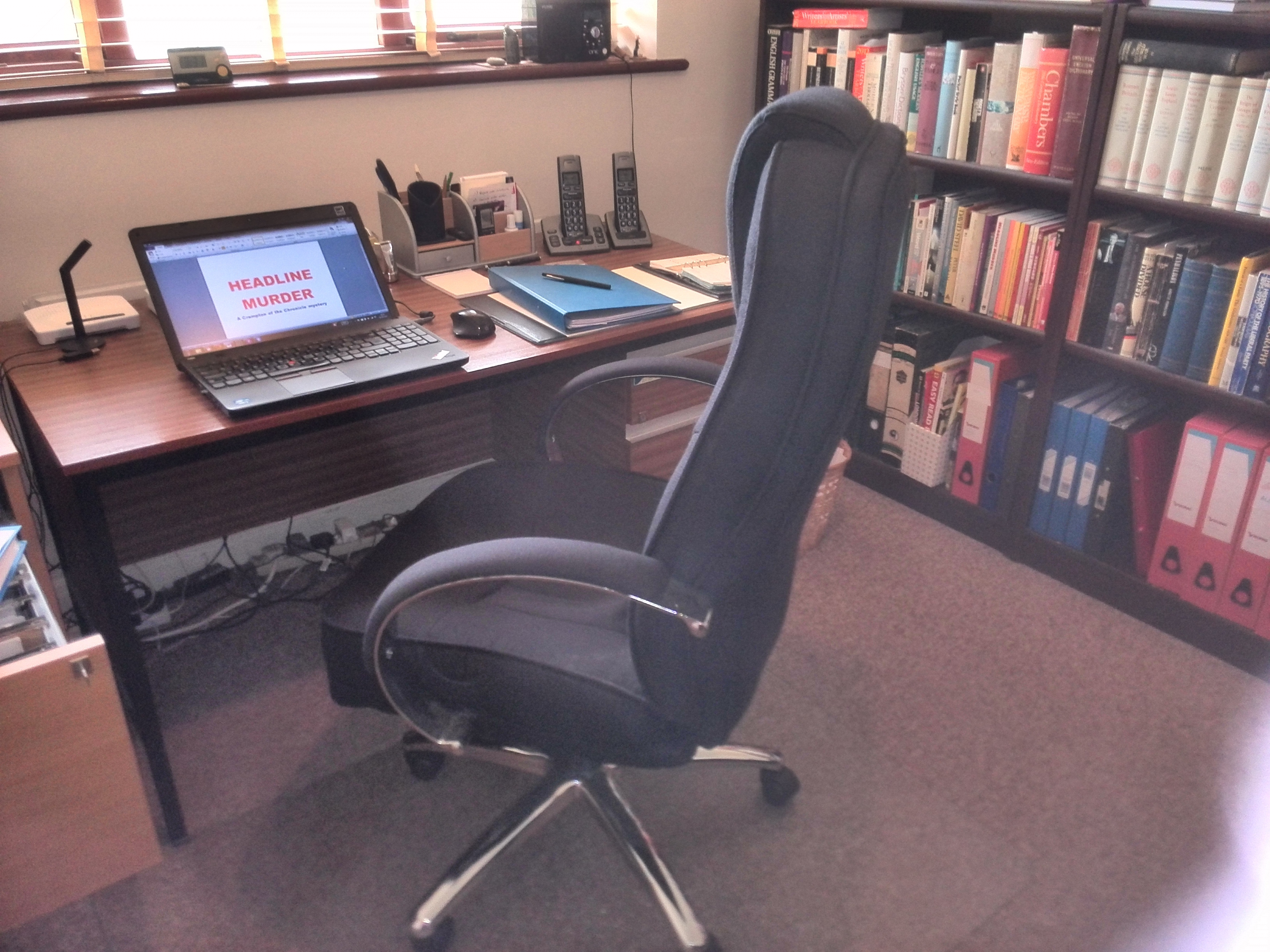 If I see something that’s obviously wrong, I’ll correct it on the fly. Otherwise, I just plough ahead. I won’t start any serious editing until I’ve got the whole manuscript in first draft. Then I’ll go back for some serious revision – by which I mean funny revision as I’m writing humorous crime mysteries. Sometimes, I’ll spot an opportunity for a joke I’ve missed. I’ll rewrite those bits that need changing because of fresh ideas I’d thought of further on. When I’m happy with this important second rewrite, I’ll go through slowly for a final polish.

For me the important unit of progress is not the word count but the scene count. I can see the book take shape as those scenes are completed.

I completed Headline Murder over a period of four months – but that was from first word on the first page to finished draft. I would estimate that the first draft took about two months and then the second-draft revision and third-draft polish over a further two months. But you must remember that I was doing my full-time journalism work at the same time! When the novel is going well, I would reckon to write at about 1,000 words an hour. When not so well, perhaps 300. When very badly, as few as 50. But journalism teaches the need to get on with it and hit deadlines. When you’ve been doing it for so long, you can’t get out of the habit of writing quickly. 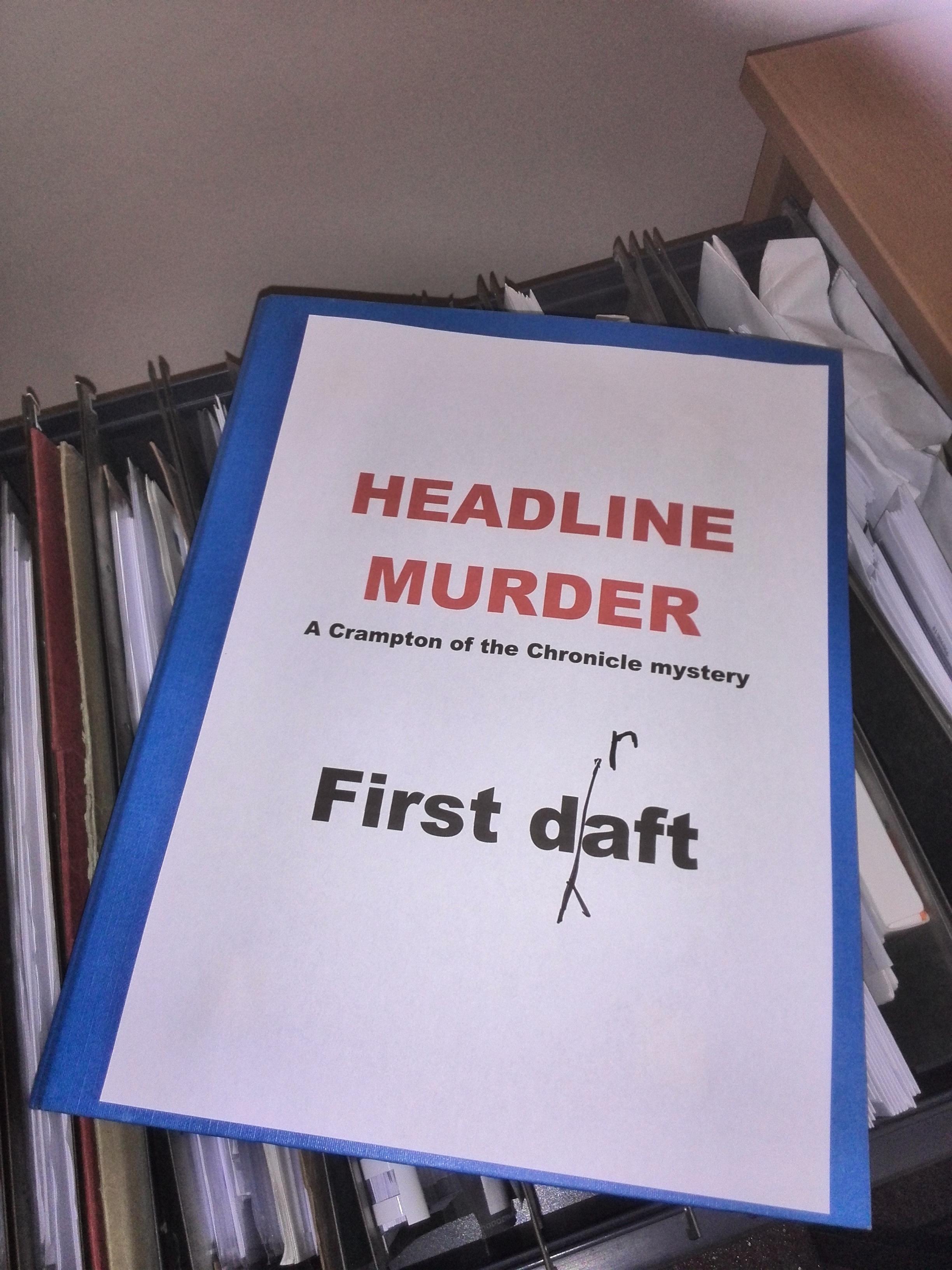 I will use both paper and the screen. Generally, I will go through on paper first making notes on changes and then sit at the laptop to incorporate those revisions – but also spot more changes I want to make as I go along.

I guess it’s probably time for a glass of something. And then it’s back to racking those brains for the next idea.

Headline Murder: A Crampton of the Chronicle mystery 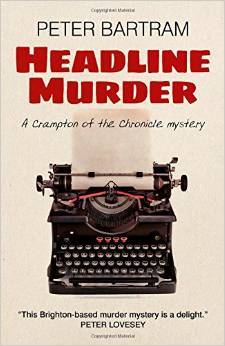 It’s August 1962, and Colin Crampton, the Brighton Evening Chronicle’s crime reporter, is desperate for a front-page story. But it’s the silly season for news – and the only tip-off Crampton has is about the disappearance of the seafront’s crazy-golf proprietor, Arnold Trumper. Crampton thinks the story is about as useful as a set of concrete water-wings. But when he learns that Trumper’s vanishing act is linked to an unsolved murder, he scents a front-page scoop. Powerful people are determined Crampton must not discover the truth. But he is quite prepared to use every newspaper scam in the book to land his exclusive. The trouble is it’s his girlfriend, feisty Australian Shirley Goldsmith, who too often ends up on the sticky end when a scam backfires. Crampton has to overcome dangers they never mentioned at journalism school before he writes his story. Headline Murder will keep you guessing – and smiling – right to the last page.