Today we have the pleasure of crime author Neil White talking us through his first draft process.

Neil was raised in West   Yorkshire where he flunked  his exams and spent a few  years drifting and dreaming.  In his mid-20’s, he returned to  education to study law,   swapping a dole cheque for a   student grant and giving  himself a few more years of  avoiding gainful employment.  Qualifying as a solicitor at 30, he grew bored of that adventure and started to write. Twelve years of poor attempts and rejection slips led to a contract with Avon in 2006, with his first book, Fallen Idols, published in 2007. He published six books with Avon before moving to Sphere in 2012, with the first of the Parker brothers novels, Next To Die, published in 2013. He is married with three children and still practise as a criminal lawyer. He spends his time watching films, rugby league and lounging.

The first thing I do is try to scribble something down. It might just be a general idea, or it might be a succession of scenes, but I need to have a map, some kind of direction, knowledge of where I’m going. I know that some people like it to unfold in front of them. I can’t do that, because I don’t trust my instincts enough.

I make symbolic gestures, like buying a new notebook and a pen, saying to myself, “this is my book 9 notebook”, or something similar. If I wanted to make myself sound good, I would say that it’s a way of drawing a line between what had gone before and what lay ahead. In reality, it’s just an excuse to fanny around a bit and put off what I’m actually supposed to be doing: writing a book. 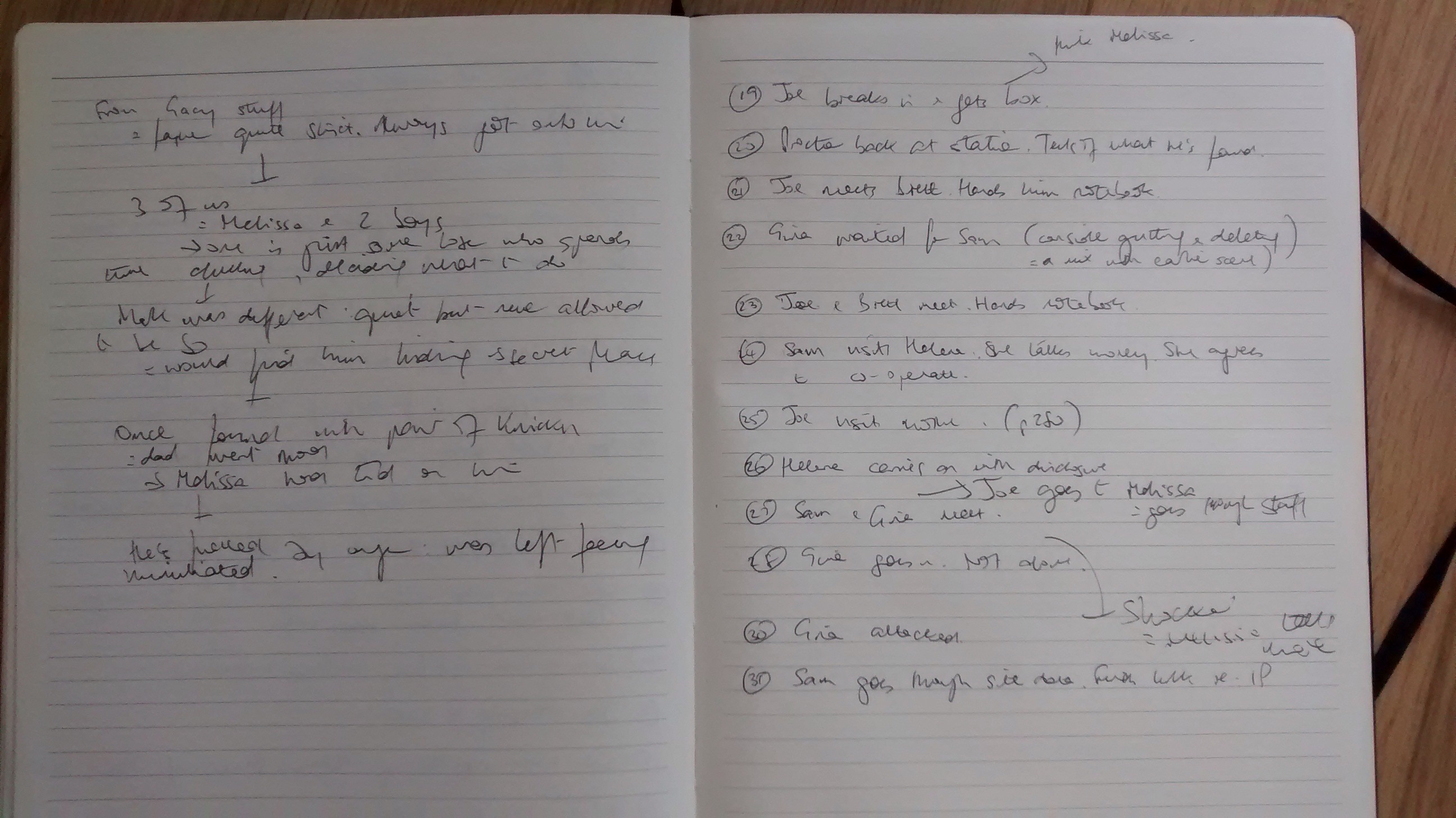 This is partly an answer to the previous question, but once I’ve got my notebook, I’ll sit myself down with a bottle of wine and start to write short scene summaries, often just a ramble, but it allows me to see the first fifth of the book. Once I can see the first 20,000 words or so, I go to the keyboard. Starting a book is nerve-wracking, because I never know until it’s finished whether it was the right idea. The first part of the book is always the most painful too. It’s a new idea, from s 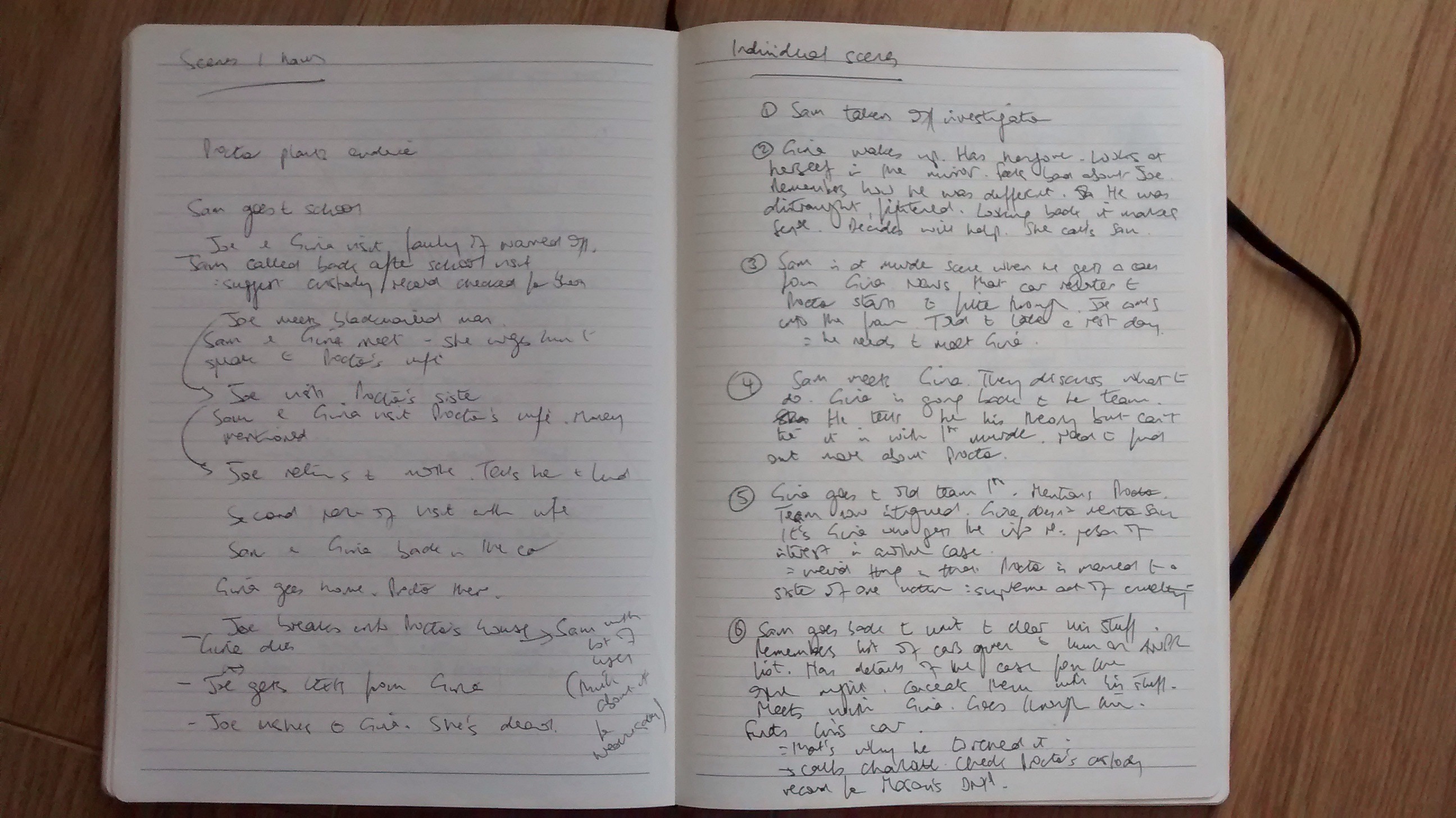 cratch, following the end of a previous book that I’d sharpened and polished and got into its groove. I force myself to keep going, but the beginning of a book is the part that will end up being changed the most.

It’s important but the amount of research depends on the subject matter of the book. For instance, my third book, Last Rites, had the Pendle Witches as the background so I did a lot of background research for that. Other books have been based on a real personality (Dead Silent had a Lord Lucan background; Cold Kill was based on Dennis Rader; Beyond Evil was based on a low-rent Charlie Manson), so the research was really about getting to know certain things I could include. My main bugbear is accuracy. I’m a criminal lawyer as well as a writer and I don’t like things to be wrong, certainly in relation to legal matters. Similarly with locations. I try to describe them accurately. If I can’t, because they don’t fit the plot, I make the places fictional. If you stretch reality with locations, you are just inviting emails pointing it out (I have them!)

The internet is a great resource, and it can often uncover things that don’t come from a simple book. In terms of locations, you can’t beat visiting the place. You will see things that you can’t get from Streetview. It might be something as simple as a lorry yard you weren’t aware of that provides a constant noise, or an ice cream van in a scenic location. If I visit a location, what I see tends to make it into the book, even if it’s a person who may never be at that location again.

This is the unreliable part: in my head, mostly. I do take photographs, and make notes as I go along, but on the whole I rely on my memory. I’m not very organised in that respect. I’ve tried all the mind mapping software and things like Pinterest, but I don’t do it well enough. I tried Scrivener once but it didn’t work for me.

In a fairly linear fashion, one scene at a time. I write books from three or four different character perspectives and sometimes I will stick with a particular character for a while, to stick with the mood, and then slot them all together, but I never get too far ahead. The book as a whole is developed in chunks. Plot the first fifth then write it, followed by plotting the second fifth, etc.

Silence and solitude is the main thing. I know some authors can write in pubs and cafes, but I can’t. I used to write with headphones and 6Music on, but I struggle to do that now. Sometimes I might buy some sweets, but that’s really just an excuse to buy some sweets. Midget Gems are my usual ones (Lion only, not Maynards). Other than that, coffee, coffee, coffee.

If I’m doing my first draft, the outside world exists a little too much. I’m easily distracted and will soon find an excuse to do something else. Films and rugby league are my main distractions. If I’m editing, I tend to shut myself away until it’s finished, usually because I’m working to a publisher’s deadline that is just plain mean.

I have a room where I watch films and sport and my desk is in the corner of that. It’s a wooden desk with an iMac on it, with a printer and various scraps of paper that never seem to get tidied away. I’m not very neat and can end up with my keyboard occupying the only piece of spare desk. Cups perch, pens fall onto the floor 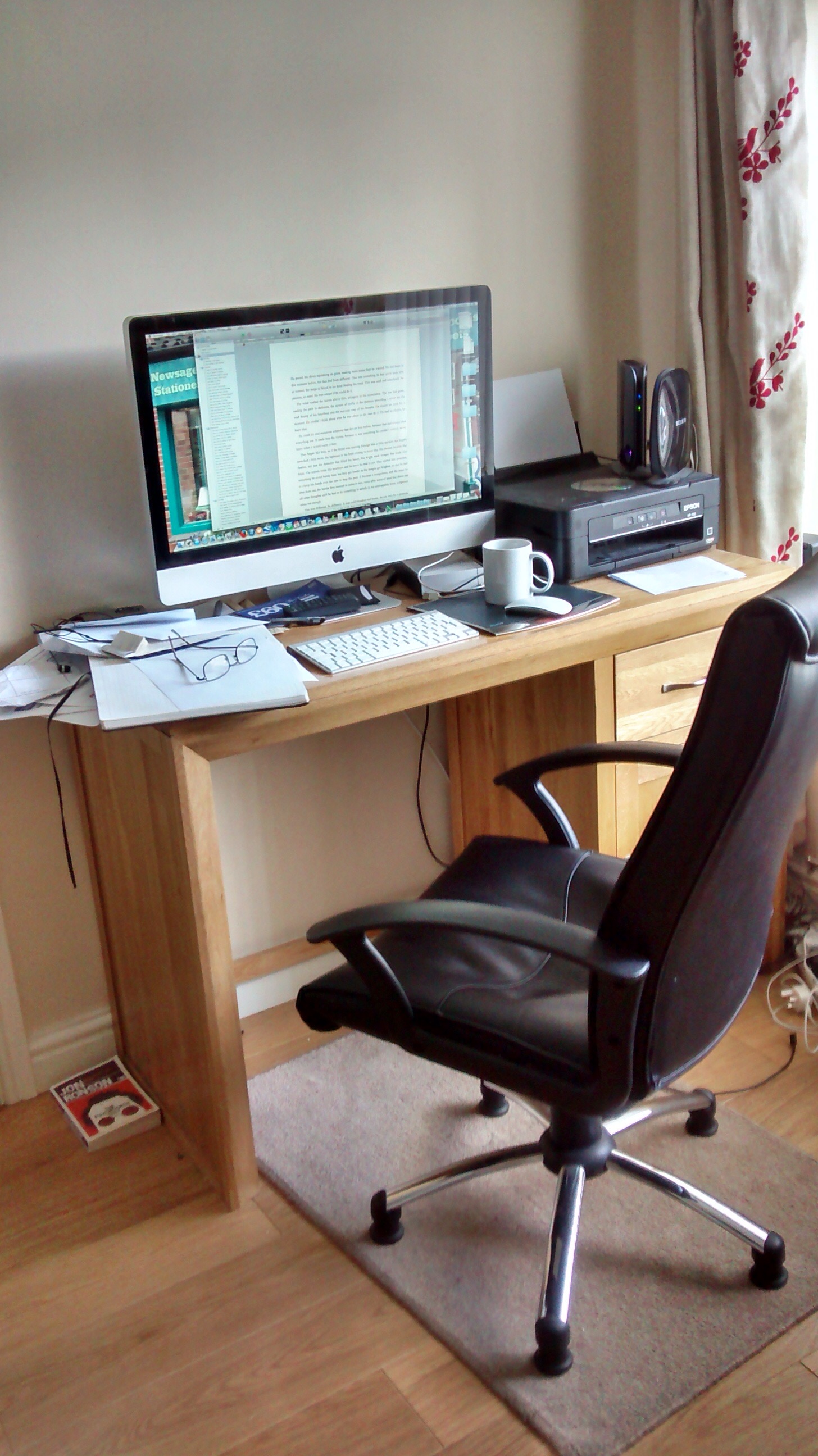 A mix of both. The first thing I do is go through what I did the night or day before, because it’s a good way of sharpening loose thoughts and spotting pretentiousness, particularly if I do it in the morning. I know that when I get stuck it’s usually because I don’t know what happens next, that I’ve got to the end of my planned section, so I go back to the beginning. I edit and sharpen, to give my mind time to work out what should happen next and to remind myself of what had gone before. Then it’s time for another bottle of wine and another scribble session.

I use the word counter at the bottom of a Word document. I’m a bit lazy with it, and I wish I could force myself to keep going, but I set a target of 1,000 words a day. Sometimes I will finish the scene, but often I’ll get to a 1,000 words and decide I’ve met my target so I can sit around and do nothing again. People like Lee Child prefer to blast out the books in three months, after months of planning, and I wish I could, but my approach to life tends to be do just enough to get by.

Writing one first draft will often overlap with the editing requirements for a previous book. The calendar answer is ten or eleven months, but the reality is probably around eight months. It’s usually pretty rough and I know it needs plenty of work, but that’s the part I prefer. I have a completed story. The polishing part is where it’s improved and comes to life.

Eventually, I will print it off, because I spot things on paper I don’t spot on the screen. I’ve read somewhere that if you change format, you spot things, because your mind has to read it afresh rather than relying on a mix of memory and what is in front of you. It does help enormously to sit there with a pen and make scrawling notes on paper, compared to scrolling through it on a screen.

Take a deep breath and then panic about whether it’s good enough. Send it to my editor and then start planning the next book. Time frightens me, whether I will finish the next book, so I rarely allow myself much time between books. 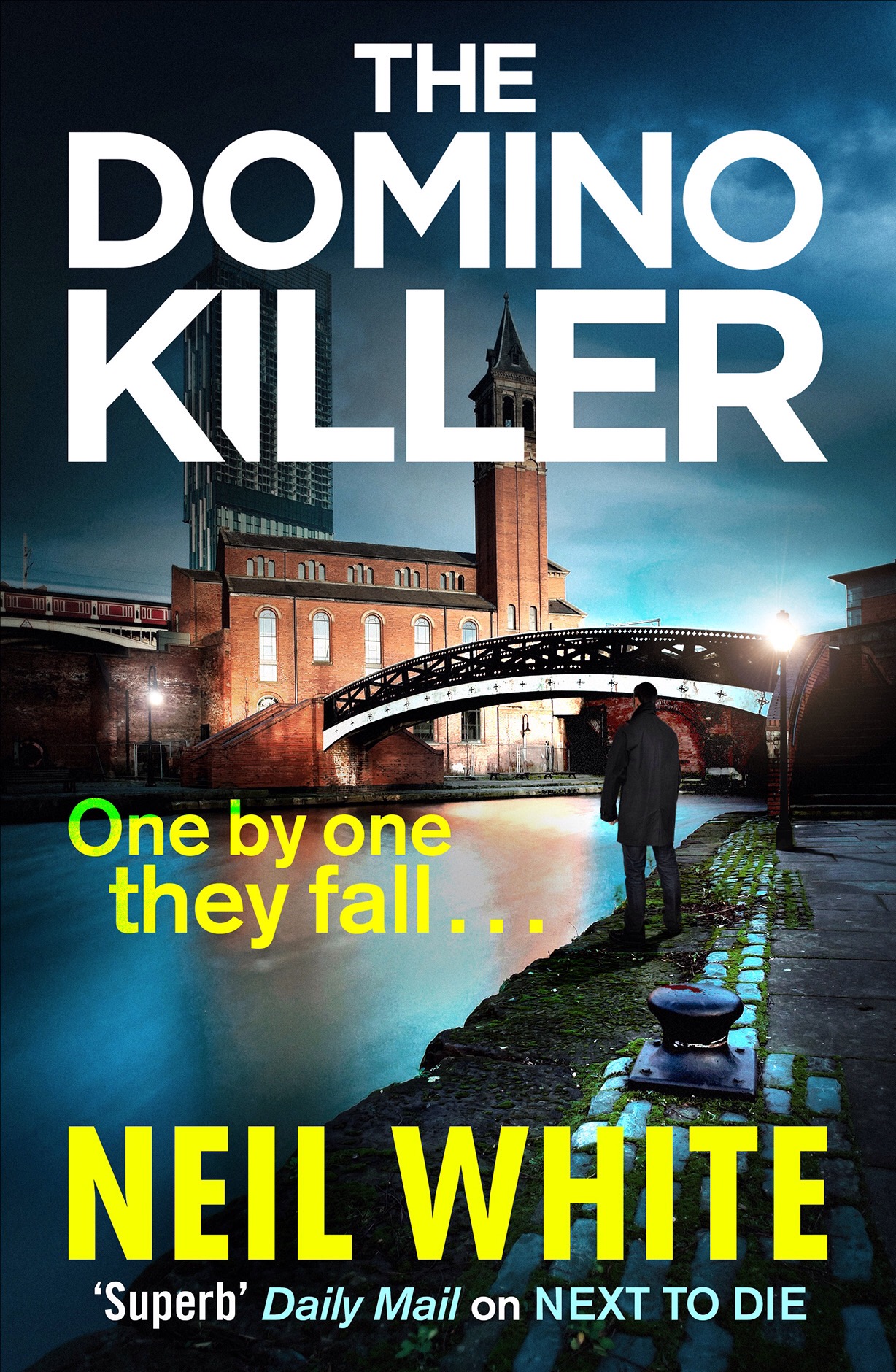 When a man is found beaten to death in a local Manchester park, Detective Constable Sam Parker is one of the investigating officers. Sam swiftly identifies the victim, but what at first looks like an open and shut case quickly starts to unravel when he realises that the victim’s fingerprints were found on a knife at another crime scene, a month earlier.
Meanwhile, Sam’s brother, Joe – a criminal defence lawyer in the city – comes face to face with a man whose very presence sends shockwaves through his life. Joe must confront the demons of his past as he struggles to come to terms with the darkness that this man represents.