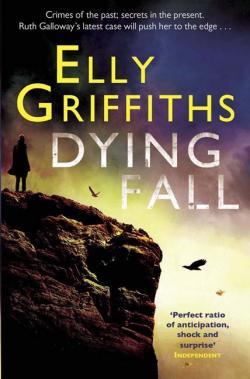 Ruth’s old friend Dan Golding thinks he has made a discovery that will change archaeology forever – but he needs Ruth’s help. Then, Dan is killed in a fire, leaving Ruth with one clue: the tomb of the Raven King.

DCI Nelson is also rediscovering the past. He meets his friend Sandy Macleod, now at Blackpool CID, who tells him there are mysterious circumstances surrounding Dan’s death. A Neo-Nazi group at Dan’s University has been making threats and could be involved.

Many of Dan’s colleagues seem fearful and have secrets to hide. Ruth is drawn into the mystery, and where she goes, so does her daughter, Kate. This time, it’s not just Ruth’s life at risk.

First of all, I’m confused by the change in title of the book. On this cover, which is the cover I read, it’s simply Dying Fall and on a later version, it’s The Dying Fall, but let’s get past that and know we’re all talking about the same book and I haven’t just made an error in my blog post title.

I love the Ruth Galloway series. I love that the crime genre is coming from a different direction than just a detective investigating a case, that Ruth is a forensic archaeologist and I also love that Ruth is very human as a female character. She is overweight, she worries somewhat about that weight but doesn’t do much about it and she is generally insecure. I think many woman can identify with her no matter what front they put on to the outside world and this is refreshing to read. She has a wonderful mix of friends who all love her for who she is, and she in return accepts them for who they are.

In this novel, the same themes I love run through. I ended the book having loved it. There were lots of bone talk and history around them, the tension was ratcheted up wonderfully towards the end where I had to keep turning the pages and turning as quickly as I could. Ruth’s relationship with Nelson is continually explored and the difficulties this causes both parties. Ruth’s relationship with Cathbad is a mainstay of the book this time around as well, as the novel is set in Nelson’s home county of Lancashire and Cathbad goes with Ruth and Kate as Ruth needs to go there to look at some bones her friends found. Cathbad does a lot for her with Kate while she does her own stuff.

The only problem I had with this novel was how slowly I felt it started. There was little talk of bones, history around them or murder in the first part of the book where most of it was focused on Ruth herself. Though Griffiths’ writing is flawless and as I’ve said, I do love Ruth, I love her in the context as an archaeologist in action, not just meandering about.

But saying that, this novel has to have one of the best opening prologues I’ve read in a long time. The last line of it sent shivers down my spine!

It is a great read and one definitely worth picking up if you are a Ruth Galloway/Elly Griffiths fan.