Broadchurch: The End Is Where It Begins by Erin Kelly & Chris Chibnall 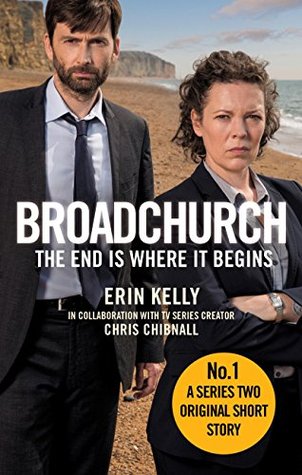 An official and original short story to be read after watching episode one of Broadchurch: Series Two. Containing completely new material not available anywhere else, this is a must-read for all fans of the show.

The first in a collection of eight short stories to run alongside the second series of ITV’s BAFTA award-winning show, Broadchurch. This story will be released at midnight following the broadcast of episode one.

The stories, written by bestselling author Erin Kelly in close collaboration with Broadchurch creator Chris Chibnall, will consist of 100% original plotlines that are tied closely to that evening’s episode. The stories will offer an unrivalled opportunity to spend more time with the characters, allowing you to delve deeper into their lives, histories and secrets in order to find out what really makes them tick.

This first-time creative collaboration between author and series creator will enhance your enjoyment of the TV series in a completely ground-breaking style. You won’t be able to wait for the next episode and story!

This was my third #BoutofBooks read. The week-long read-a-thon. And I think I’m going to be kicked to hell and back for this blog post, but if you’re going to blog and give your thoughts on things then you bloody well better be prepared to stand by them.

I absolutely loved Broadchurch series one. LOVED it. I loved the small town atmosphere and closed in filming directions and characterisations. I particularly loved the final episode reveal and reactions – though I had guessed very early on due to his too perfectness. Anyway, I digress.

Because of the huge public consumption of this programme, someone, somewhere decided that it would be a good idea to have these short stories to go along with series two. And that they should not be released until after each episode has aired. I dutifully watched episode one and was in awe of it again. There was no new dead body, it was still running from where the last series left. And the shocker in court, well, my heart was in my mouth.

But we’re talking about the book.

I bought and read the book. It’s about Ellie and how she got to where we first saw her; in uniform, pulling up a driver in a car and giving him a ticket.

It’s well written and has its own atmosphere. Its dark, bleak, and suffocating as Ellie believes her life to be.

The thing is, I don’t think you needed to wait until after the show to read it. Knowing why you were seeing her in uniform really wouldn’t have hurt the show at all if you’d read it before the show. So for me, it makes the books a gimmick. It’s feeding on the Broadchurch frenzy and obsession. The whole crime watching/reading community is going to be out there buying these shorts. And they are short. I don’t think you needed to have the explanation of why Ellie is in uniform in a short story, it could easily have come out as part of a two sentence tirade in the drama. Plenty of other dramas manage to fit all these details in without the need for these shorts. The novels, yes, these are a great idea, but I just see the shorts as someone seeing a money-making scheme.

If you are a compulsive show lover, I can see you enjoying them, but I won’t be buying any more. If I can’t watch the show and get all the information I need from it, then I’ll not watch it.

Great writing, but worth reading??