Black Wood is the debut thriller by SJI Holliday and will be released next year. I’ve had the pleasure of knowing Susi for some time on Twitter and have also met her on a couple of occasions, so I am absolutely thrilled to be able to show you her first ever cover. I was also able to ask her some questions that draw out some telling answers about the coming release. So lets take a look! 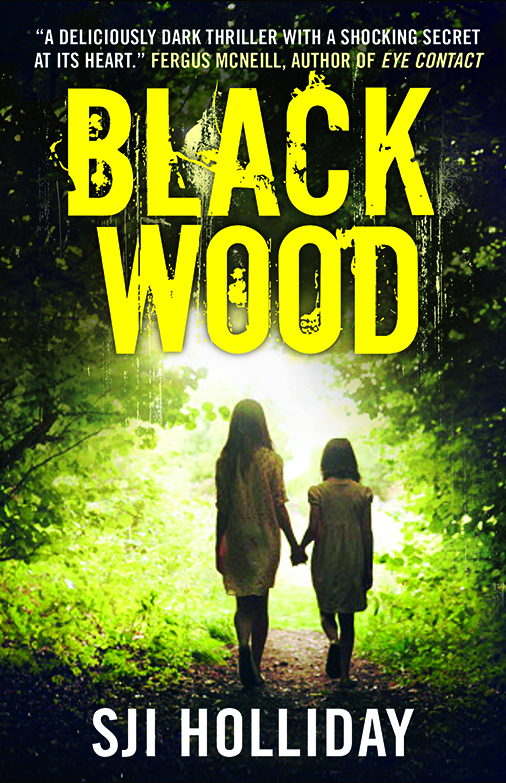 I love the cover Susi. It’s very atmospheric. Were you able to have any input in the design and if not, are you happy with the results?

Thanks Rebecca – I love it too! It fits the mood of the book perfectly and I am thrilled with it. In the very early stages, I mentioned that I liked the yellow title font that was currently popular amongst crime novels, and I was pleased to find that this request had been incorporated – mainly, I think, because it is still popular, and the publishers discuss the potential cover designs with booksellers before they finalise them – so they know they kind of things that are selling right now. Several people have mentioned how eye-catching it is, and said it would definitely be a book they would pick up if they saw it in a shop. I was sent the draft and asked to provide feedback before finalisation. I only requested two things – a slight tweak to the author name font, and I was also allowed to choose which quote I wanted on the front. When I received the one from Fergus McNeill, I couldn’t believe how perfectly it summed up the book.

The cover has drawn me in and I’m intrigued. What are you allowed to say about the book right now?

I can give you the blurb… Something happened to Claire and Jo in Black Wood: something that left Claire paralysed and Jo with deep mental scars. But with Claire suffering memory loss and no evidence to be found, nobody believes Jo’s story. Twenty-three years later, a familiar face walks into the bookshop where Jo works, dredging up painful memories and rekindling her desire for vengeance. And at the same time, Sergeant Davie Gray is investigating a balaclava-clad man who is attacking women on a disused railway, shocking the sleepy village of Banktoun. But what is the connection between Jo’s visitor and the masked man? To catch the assailant, and to give Jo her long-awaited justice, Gray must unravel a tangled web of past secrets, broken friendship and tainted love. But can he crack the case before Jo finds herself with blood on her hands?

And I can also tell you that the story was inspired by a disturbing event from my childhood… but the details of that will be revealed later!

And Black Wood? A Fabulously dark title. I’m rubbish with titles. At what point did the title come to you?

I am very driven by titles. I often pick up a book based on an intriguing title, even if I know nothing about the story. I love it when a title fits a book well, as I don’t think they always do and I know that lots of people struggle to come up with them. My agent has said I am one of only a few of his clients who comes up with titles before they’ve written the book. Maybe I should write a book full of titles? Ha ha! So to answer your question, the title came first. I had the nugget of the idea, based on the event that I hinted at above, but I couldn’t write a thing until I had the title. I looked at a map of the area where the story is based, and it just jumped out at me. Black Wood a real place, but what happened in the story didn’t actually happen there. My town, Banktoun, is a fictionalised version of the real town where it is set.

Wow. This is a tough question! I’m not sure I’d choose to be any of them, really. There are many flawed characters in the book – as in life – and I don’t relate 100% to any of them. But I’m pretty sure, that like in a lot of novels, there is a bit of me in all of them – good bits and bad! If I really have to choose, I will pick Laura Goldstone – a feisty schoolgirl who does karate, struggles to stop herself from eating chips, and is pivotal in leading the story to its conclusion. Thinking about her now, I think she definitely has to come back in a future book! I am writing notes for another couple of books set in the same town – not a series in the procedural sense, but with overlapping characters. Thanks for helping me decide on this, Rebecca. Laura is definitely coming back!

Thanks for talking to me Susi, it’s been great having you and I can’t wait to read Black Wood!

You can find Susi on (apologies, my link thingy isn’t working this morning, so I’ve got to leave the full URL)