A Room Full of Bones by Elly Griffiths 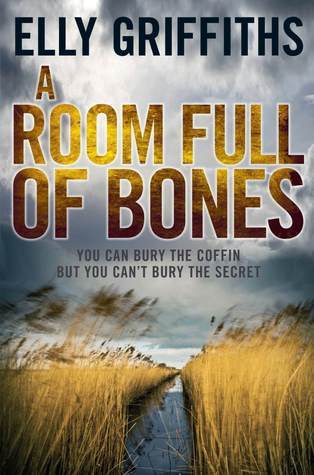 On Halloween night, the Smith Museum in King’s Lynn is preparing for an unusual event — the opening of a coffin containing the bones of a medieval bishop. But when forensic archaelogist Ruth Galloway arrives to supervise, she finds the curator, Neil Topham, dead beside the coffin. Topham’s death seems to be related to other uncanny incidents, including the arcane and suspect methods of a group called the Elginists, which aims to repatriate the museum’s extensive collection of Aborigine skulls; the untimely demise of the museum’s owner, Lord Smith; and the sudden illness of DCI Harry Nelson, who Ruth’s friend Cathbad believes is lost in The Dreaming — a hallucinogenic state central to some Indigenous Australian beliefs. Tensions build as Nelson’s life hangs in the balance. Something must be done to set matters right and lift Nelson out of the clutches of death, but will Ruth be able to muster herself out of a state of guilt and foreboding in order to do what she does best?

I absolutely love the Ruth Galloway series by Elly Griffiths, but I’m slightly disappointed by this fourth offering.

The House at Sea’s End, (review Here.) the third novel in the series, ended with a personal life cliffhanger for the Ruth/Nelson dynamic and that played out well during this book and promises to be interesting to follow for fans of the series.

What I found disappointing was the lack of Ruth being involved as a forensic archaeologist. With a series based on the protagonist’s job being just this, and readers I presume being interested in that side of the story, I found the only reason I continued reading the book was my investment in the main characters.

The blurb states “but will Ruth be able to muster herself out of a state of guilt and foreboding in order to do what she does best?” but she doesn’t do anything. During any of the entire book. She seems to be more of a bystander to events.

As for the plot itself, it’s confusing. There’s a snake theme. A very confusing theme. I’m more confused about it now I know the ending.

I will be reading the next in the series. I am hoping this is just a bump in the road. Elly Griffiths has just been shortlisted for the CWA Dagger in the Library, so I am very hopeful.

You can also read my glowing review of the first Ruth Galloway novel, Crossing Places, Here.

Do you keep reading if one in a series drops down a level in your usual expectations?