Today I hand over the blog to Annalisa Crawford who is celebrating the first anniversary of the release of her Novella. I’m thrilled to be able to hand the blog over to her today. 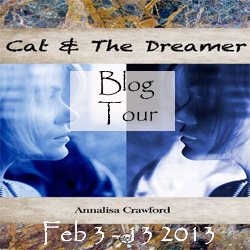 It’s been a year since my novella Cat and The Dreamer was published! There have been lots of changes in my own life in that time, and I started to wonder what else had changed…

Thank you Rebecca for inviting me over today!

In 2005, London was awarded the Olympics and Paralympics 2012. In 2008, at the Beijing closing ceremony, we were left with this image and suddenly every British person wondered if it was such a good idea.

In fact, we were collectively holding our breath until the Opening Ceremony, and then… WOW!

Opinion is divided, but personally I loved both the Opening and Closing Ceremonies. Completely surreal and wacky from start to finish, with references that not even everyone in Britain would have got. But it was ours – we didn’t try to copy anyone else. Danny Boyle, best known for directing Slumdog Millionaire, Shallow Grave and Trainspotting, was our guy with the vision. Chimneys, the NHS, Brunel, the Queen jumping out of a helicopter, the fireworks…

I could go on and on just about the first day… but actually there was some sport as well. Some fantastic sport. The BBC, in their wisdom, used previous Olympic winners including Steve Redgrave and Matthew Pinsent to commentate. Watching these previous winners celebrating and commiserating on screen with the current athletes was lovely. I was watching on Super Saturday when Mo Farah, Jessica Ennis and Greg Rutherford all won gold medals within about 45 minutes of each other.

I was watching when Andy Murray won gold in a replay of the Wimbledon final match he’d lost. I was watching when Oscar Pistorius made Olympic history by being the first double amputee to compete. And I haven’t even mentioned Usain Bolt yet!

There’s too much to say. We had a great time in the summer… and then we got to repeat it all in September with the Paralympic Games where athletes such as Ellie Simmonds, Sarah and Barney Storey, and David Weir became household names.

C4 did an exceptional job of showing every single Paralympic event in the UK. I don’t know what the coverage was like around the world – I don’t know if it was just because we were hosting – but it was the first time I’ve ever seen the Paralympics given equal coverage and the athletes being able to talk about their sport rather than their disability.

And then, all too soon, it was over. We swept up, put the chairs away, locked up the bikes in the bike shed and pulled the plug out of the Thames. And had a bit of a hangover, to be honest – you know the kind where something feels wrong, even though you don’t have a headache and your stomach isn’t churning. I’m really glad we had such a good party though, and I’m really glad the world got invited!

About Cat and The Dreamer

As a teenager, Julia survived a suicide pact, while her best friend Rachel died. Julia’s only escape from her guilt, and her mother’s over-protection, is her imagination. When Adam arrives in the office, Julia’s world takes a startling turn as she realises reality can be much more fun than fantasy. Finally she has someone who can help her make the most of her life. But can she allow herself to be truly happy?

Cat and The Dreamer is available on Kindle UK, Kindle US, Kobo, Nook, iTunes/iBooks, and via Vagabondage Press.

Annalisa Crawford lives and writes in Cornwall with a good supply of beaches and moorland to keep her inspired. She finds endless possibilities in the relationships between people. Several new projects are on the cards for 2013.