Last month’s book was not particularly popular and I don’t think there’s any need to upload and post the discussion where the author might come across it.

While it was still a great meeting and I enjoyed it – all members are warm, kind, and welcoming – we don’t always need to share our discussions.

If you are interested in joining the next meeting, please sign up HERE. We meet every fourth Monday from the meeting date. Attendance at the meeting means you know the next month’s theme and can nominate a book for the next day’s vote.

Feel free to leave your vote for November’s book in the comments below. The next meeting is Monday 7th November at 8pm GMT.

The theme for November is books set in Australia or New Zealand. There are some great books below. I received a lot of nominations this month and have done my best and selected one from everyone’s listed suggestions. I look forward to seeing which book we’ll be reading next!

Please comment below with your vote. The vote is open until the end of Friday 14th October.

The Dry by Jane Harper 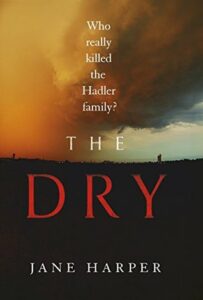 After getting a note demanding his presence, Federal Agent Aaron Falk arrives in his hometown for the first time in decades to attend the funeral of his best friend, Luke. Twenty years ago when Falk was accused of murder, Luke was his alibi. Falk and his father fled under a cloud of suspicion, saved from prosecution only because of Luke’s steadfast claim that the boys had been together at the time of the crime. But now more than one person knows they didn’t tell the truth back then, and Luke is dead.

Amid the worst drought in a century, Falk and the local detective question what really happened to Luke. As Falk reluctantly investigates to see if there’s more to Luke’s death than there seems to be, long-buried mysteries resurface, as do the lies that have haunted them. And Falk will find that small towns have always hidden big secrets.

The Woman in the Library by Sulari Gentill 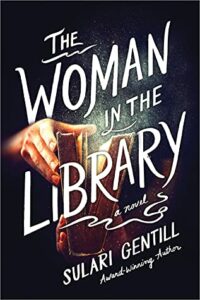 In every person’s story, there is something to hide…

The ornate reading room at the Boston Public Library is quiet, until the tranquility is shattered by a woman’s terrified scream. Security guards take charge immediately, instructing everyone inside to stay put until the threat is identified and contained. While they wait for the all-clear, four strangers, who’d happened to sit at the same table, pass the time in conversation and friendships are struck. Each has his or her own reasons for being in the reading room that morning—it just happens that one is a murderer.

The Cleaner by Paul Cleave 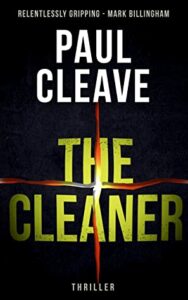 Joe is in control of everything in his simple life, both his day job as a janitor for the police department and his night work. He isn’t bothered by the daily news reports of the Christchurch Carver, who, they say, has murdered seven women. Joe knows, though, that the Carver killed only six. He knows that for a fact, and he’s determined to find the copycat. He’ll punish him for the one, then frame him for the other six. It’s the perfect plan because he already knows he can outwit the police.
All he needs now is to take care of all the women who keep getting in his way, including his odd, overprotective mother and Sally, the maintenance worker who sees him as a replacement for her dead brother. Then there’s the mysterious Melissa, the only woman to have ever understood him, but whose fantasies of blackmail and torture don’t have a place in Joe’s investigation.

The Stoning by Pete Papathanasiou 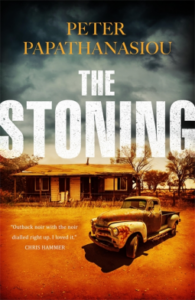 A small town in outback Australia wakes to an appalling crime.

A local schoolteacher is found taped to a tree and stoned to death. Suspicion instantly falls on the refugees at the new detention centre on Cobb’s northern outskirts. Tensions are high, between whites and the local indigenous community, between immigrants and the townies.

Still mourning the recent death of his father, Detective Sergeant George Manolis returns to his childhood hometown to investigate. Within minutes of his arrival, it’s clear that Cobb is not the same place he left. Once it thrived, but now it’s a poor and derelict dusthole, with the local police chief it deserves. And as Manolis negotiates his new colleagues’ antagonism, and the simmering anger of a community destroyed by alcohol and drugs, the ghosts of his past begin to flicker to life.

Vivid, pacy and almost dangerously atmospheric, The Stoning is the first in a new series of outback noir featuring DS Manolis, himself an outsider, and a good man in a world gone to hell. 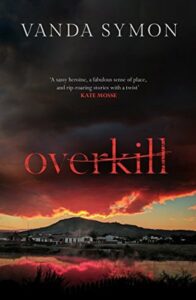 When the body of a young mother is found washed up on the banks of the Mataura River, a small rural community is rocked by her tragic suicide. But all is not what it seems. Sam Shephard, sole-charge police constable in Mataura, soon discovers the death was no suicide and has to face the realisation that there is a killer in town. To complicate the situation, the murdered woman was the wife of her former lover. When Sam finds herself on the list of suspects and suspended from duty, she must cast aside her personal feelings and take matters into her own hands. To find the murderer … and clear her name.