Last night the virtual crime book club met and discussed Malice by Kiego Higashino. It was a resounding yes from the group, with all members enjoying the read.

You can view the discussion in the video below, but be aware it does contain spoilers.

The next meeting is Monday 10th October at 8pm (UK timezone). If you’re not yet a member you can sign up HERE.

The theme for October is an open month. Any book from any sub-genre of crime. Your nominated books are below. Leave your vote in the comments by the end of Friday 16th September.

The Enemy Within by Adam Macqueen 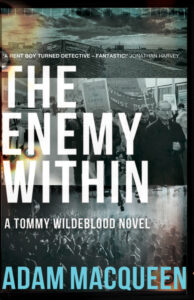 It’s 1984. Tommy Wildeblood, the hero of Beneath the Streets, has put his days as a Piccadilly rent boy and scandal-hunting sleuth behind him and is studying at the radical Polytechnic of North London. But politics isn’t ready to leave him alone. With his school convulsed by the battle against National Front infiltrators and the miners’ strike splitting the country, everyone has to pick a side. Tommy knows where his sympathies lie–and not just because revolutionary summer camps and trips to the pit villages provide an ideal excuse to spend time with handsome young Irishman, Liam. But as the pair are drawn ever deeper into a web of radical politics, Tommy is forced to face up to how little he knows about his new lover–and how far he might be willing to go in the name of revolution. The Enemy Within is a gripping thriller whose cast of real-life characters include taboo-busting artist Derek Jarman, corrupt Trotskyist leader Gerry Healy, a young Jeremy Corbyn, and major figures from Margaret Thatcher’s government.

One Lost Soul by J.M. Dalgliesh 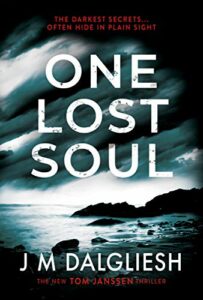 When a body is found on a lonely cliff top path, the angelic face of a murdered teenager lies facing the rising sun. Strangled by the hands of an unknown killer, it falls to DI Tom Janssen and his fledgling team to find out how she came to be there. Destined for a career in medicine, one to rival that of her parents, Holly Bettany’s future was as bright as it had been privileged. Seemingly, all that could threaten this promising teenager’s life was Holly herself.

In an idyllic coastal setting, Janssen must unpick the layers of deceit within a close-knit community that threaten to reveal scandal at every turn. Holly had a secret… and she knew the secrets of others…

Who was prepared to kill in order to keep them hidden? What happens if another comes to know what she did? One thing is certain… a brutal killer has no boundaries…

Set within the mysterious beauty of coastal Norfolk, this fast-paced British detective novel is a dark murder mystery with a little humour, one that will keep you guessing until the very end when the final shocking twist is revealed.

The Windsor Knot by Sophia Bennett 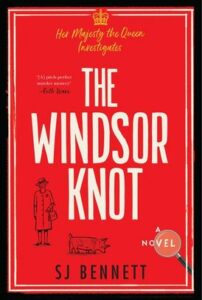 It is the early spring of 2016 and Queen Elizabeth is at Windsor Castle in advance of her 90th birthday celebrations. But the preparations are interrupted when a guest is found dead in one of the Castle bedrooms. The scene suggests the young Russian pianist strangled himself, but a badly tied knot leads MI5 to suspect foul play was involved. The Queen leaves the investigation to the professionals—until their suspicions point them in the wrong direction.

Unhappy at the mishandling of the case and concerned for her staff’s morale, the monarch decides to discreetly take matters into her own hands. With help from her Assistant Private Secretary, Rozie Oshodi, a British Nigerian and recent officer in the Royal Horse Artillery, the Queen secretly begins making inquiries. As she carries out her royal duties with her usual aplomb, no one in the Royal Household, the government, or the public knows that the resolute Elizabeth will use her keen eye, quick mind, and steady nerve to bring a murderer to justice.

Silent Child by Sarah A. Denzil 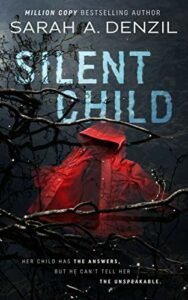 In the summer of 2006, Emma Price watched helplessly as her six-year-old son’s red coat was fished out of the River Ouse. It was the tragic story of the year – a little boy, Aiden, wandered away from school during a terrible flood, fell into the river, and drowned.

His body was never recovered.
Ten years later, Emma has finally rediscovered the joy in life. She’s married, pregnant, and in control again…

Too traumatized to speak, he raises endless questions and answers none. Only his body tells the story of his decade-long disappearance. The historic broken bones and injuries cast a mere glimpse into the horrors Aiden has experienced. Aiden never drowned. Aiden was taken.
As Emma attempts to reconnect with her now teenage son, she must unmask the monster who took him away from her. But who, in their tiny village, could be capable of such a crime?

It’s Aiden who has the answers, but he cannot tell the unspeakable.

The Poet by Michael Connelly 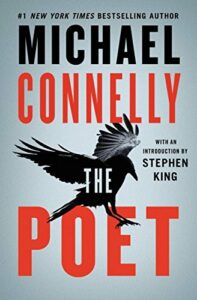 Death is reporter Jack McEvoy’s beat: his calling, his obsession. But this time, death brings McEvoy the story he never wanted to write–and the mystery he desperately needs to solve. A serial killer of unprecedented savagery and cunning is at large. His targets: homicide cops, each haunted by a murder case he couldn’t crack. The killer’s calling card: a quotation from the works of Edgar Allan Poe. His latest victim is McEvoy’s own brother. And his last…may be McEvoy himself.

Death and the Conjuror 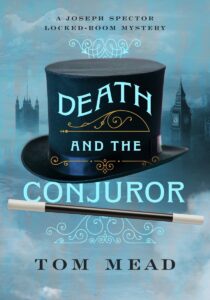 In 1930s London, celebrity psychiatrist Anselm Rees is discovered dead in his locked study. There seems to be no way a killer could have escaped unseen. There are no clues, no witnesses, and no evidence of the murder weapon. Stumped by the confounding scene, the Scotland Yard detective on the case calls on retired stage magician turned part-time sleuth Joseph Spector.

Spector has a knack for explaining the inexplicable, but even he finds that there is more to this mystery than meets the eye. As he and the Inspector interview the colourful cast of suspects, they uncover no shortage of dark secrets… or motives for murder. And when a second murder occurs, this time in an impenetrable elevator, they realize the crime wave will become even more deadly unless they can catch the culprit soon.