I’m excited to reveal the cover and blurb for book three in the DI Claudia Nunn series. It’s currently available for pre-order HERE and is published next Tuesday 31st May.

If you read Seconds to Die, the second book in the series, you will know Claudia has some demons to deal with – but don’t worry if you haven’t, it’s quickly explained in this book, which can be read as a standalone. Though, if you’re a quick reader, you can always start at the beginning of the series! 🙂 And on top of those issues Claudia has, work is not as straightforward as it usually is. Someone doesn’t want her team to uncover the truth…

Read on to find out more! 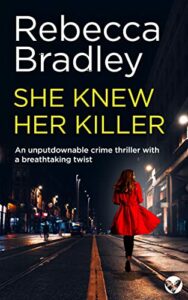 A secret past turned deadly. A killer with everything to lose. Prepare to be hooked.

Detective Claudia Nunn is called to a gruesome scene at a swanky Sheffield hotel. Harlow Cunningham has been found murdered in her room. She was in town with four old school friends, but all of them say the same thing: Harlow had been distracted and kept disappearing all weekend.

What had Harlow been up to, and is it what got her killed?

But just as the investigation is getting started, the top-brass start moving detectives off the case. Soon only Claudia, DS Dominic Harrison and DS Russ Kane are left.

The team suspects corruption. And then they become the target of violent attacks.

Someone will do anything to stop the truth getting out. And it’s up to Claudia to catch a killer before they kill again.

I absolutely LOVE the cover and hope you like it too. It works brilliantly with the rest of the series. I’m excited for you to read it.

Keep an eye on the blog next week, as I will give you a sneak peek and share the first chapter with you!