Last night we had a brilliant meeting discussing Constance by Matthew Fitzsimmons. It’s a sci-fi/crime crossover book and provided a lot of subject matter for members to talk about. It was the most popular book we have read as a group and all members said they would read the next book in the Constance series. We were also joined by the author for the first half an hour, so the video is a little longer than usual. But it is an interesting one, so do give it a watch. Be aware it does involve spoilers so don’t watch if you intend to read the book.

This month is Black History Month, so in honour of that, we are reading a crime novel written by a Black author. Please vote in the comments below. The next meeting is Monday 8th November at 8pm GMT (UK time). If you haven’t yet signed up to the book club, you can sign up HERE.

This is so you can be given access to the zoom login each month.

Compelled to uncover the secrets of the man who lived in the room before her, Lisa is alarmed when increasingly disturbing incidents start to happen. Someone doesn’t want Lisa to find out the truth.

This room has already claimed one victim?

Is it about to take another?

Her Three Lives by Cate Holahan 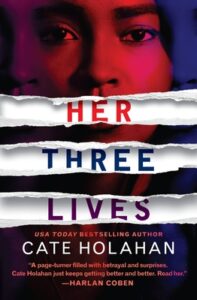 Her public life
Jade Thompson has it all. She’s an up-and-coming social media influencer, and she has a beautiful new home and a successful architect for a fiancé. But there’s trouble behind the scenes. To Greg’s children, his divorce from their mother and his new life can only mean a big mid-life crisis. To Jade, his suburban Connecticut upbringing isn’t an easy match with her Caribbean roots.
Her private life A savage home invasion leaves Greg house-bound with a traumatic brain injury and glued to the live feeds from his ubiquitous security cameras. As the police investigate the crime and Greg’s frustration and rage grows, Jade begins to wonder what he may know about their attackers. And whether they are coming back.
Her secret life As Greg watches Jade’s comings and goings, he becomes convinced that her behavior is suspicious and that she’s hiding a big secret.  The more he sees, the more he wonders whether the break-in was really a random burglary. And whether he’s worth more to Jade if he were dead than alive. 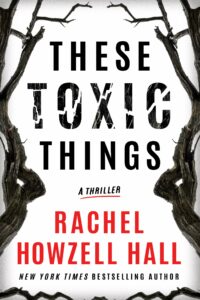 Mickie Lambert creates “digital scrapbooks” for clients, ensuring that precious souvenirs aren’t forgotten or lost. When her latest client, Nadia Denham, a curio shop owner, dies from an apparent suicide, Mickie honors the old woman’s last wish and begins curating her peculiar objets d’art. A music box, a hair clip, a key chain―twelve mementos in all that must have meant so much to Nadia, who collected them on her flea market scavenges across the country.

But these tokens mean a lot to someone else, too. Mickie has been receiving threatening messages to leave Nadia’s past alone.

It’s becoming a mystery Mickie is driven to solve. Who once owned these odd treasures? How did Nadia really come to possess them? Discovering the truth means crossing paths with a long-dormant serial killer and navigating the secrets of a sinister past. One that might, Mickie fears, be inescapably entwined with her own.

My Sister The Serial Killer by Oyinkan Braithwaite 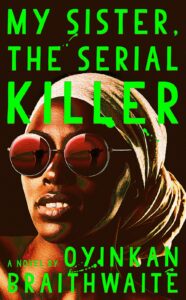 When Korede’s dinner is interrupted one night by a distress call from her sister, Ayoola, she knows what’s expected of her: bleach, rubber gloves, nerves of steel and a strong stomach. This’ll be the third boyfriend Ayoola’s dispatched in, quote, self-defence and the third mess that her lethal little sibling has left Korede to clear away. She should probably go to the police for the good of the menfolk of Nigeria, but she loves her sister and, as they say, family always comes first. Until, that is, Ayoola starts dating the doctor where Korede works as a nurse. Korede’s long been in love with him, and isn’t prepared to see him wind up with a knife in his back: but to save one would mean sacrificing the other…

A Rage in Harlem by Chester Himes 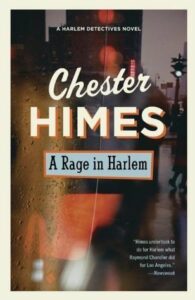 For love of fine, wily Imabelle, hapless Jackson surrenders his life savings to a con man who knows the secret of turning ten-dollar bills into hundreds—and then he steals from his boss, only to lose the stolen money at a craps table. Luckily for him, he can turn to his savvy twin brother, Goldy, who earns a living—disguised as a Sister of Mercy—by selling tickets to Heaven in Harlem.  With Goldy on his side, Jackson is ready for payback.

The Trap by Melanie Raab 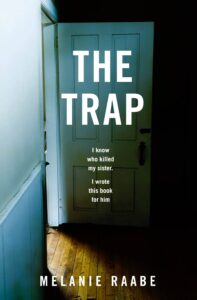 For 11 years, the bestselling author Linda Conrads has mystified fans by never setting foot outside her home. Haunted by the unsolved murder of her younger sister–who she discovered in a pool of blood–and the face of the man she saw fleeing the scene, Linda’s hermit existence helps her cope with debilitating anxiety. But the sanctity of her oasis is shattered when she sees her sister’s murderer on television. Hobbled by years of isolation, Linda resolves to use the plot of her next novel to lay an irresistible trap for the man. As the plan is set in motion and the past comes rushing back, Linda’s memories — and her very sanity — are called into question. Is this man a heartless killer or merely a helpless victim?

Looking forward to seeing you at next month’s meeting. See you there!