Yes, I know I kept it a little under wraps, but it’s been difficult with publication being so close to that of Seconds to Die (which I really hope you enjoyed!)

Love Lies Bleeding finds Hannah in the most difficult position of her life. She’s struggling and it’s possible she’s going to bring the entire case they’re working on down with her.

Below is the cover and blurb. Continue reading for the first chapter! I’m so excited for this book. It means a lot to me. It was hard to put Hannah through this. I really have pulled the rug from under her. So much so I’m not sure how she finds her way back, or if she even does! Check it out… 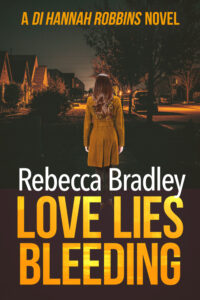 A murdered woman brings Detective Hannah Robbins into the world of women who love lifers.

Audrey King, a teacher of young children, did nothing but fall for Wendell Hayes. A man serving life for slaughtering his family. She’s found dead in her home with the murderous signature of the very man she visited, but there’s no way he could have killed Audrey from inside prison.

Hayes, the son who took a hammer to his parents, his pregnant sister and her husband, horrifies detective Hannah Robbins. The threats he made against her when she arrested him for those murders still haunt her. Yet she must confront him if she is to get to the bottom of this brutal crime.

But Hayes isn’t the only one haunting Hannah’s slowly fracturing mind. A previous case where she was the victim is destroying her. Can she find justice for Audrey before her world spirals out of control, or will she take the investigation down with her?

The Monster Mansion, otherwise known as Her Majesty’s Prison Wakefield, loomed over the city skyline.
The November wind was chilly as Audrey stepped through the doorway, returning to the outside world. She pulled her coat tighter around herself.
A smile hovered over her lips. It was always a bittersweet moment as she exited the building. Her life was lighter, brighter, for what the day had brought. And though she was walking away, she would soon back.
A woman in front of her pulled a crying child along by his hand. He wanted his daddy, snot and tears streaking his tiny face.
He was too small to understand the joy of anticipation. Of knowing you would come again and your heart would soar with the love it held.
No walls or guards could stop the genuine power of love. Audrey wanted to run to the boy, bend down to his level, tell him his daddy loved him too and to not be sad but to revel in the adoration they shared. It was a true and blessed love. Only a special few understood the emotion that could be reached once physical barriers were placed between them and all they had was their hearts and minds.
It was something else entirely.
It was pure and real. So strong Audrey imagined she could hold it in her hand and look at it.
People were so obsessed with the physical. The sex. The messy side of a relationship and they never realised they had to connect on a higher level. They missed the real meaning. But Audrey had found it and she was holding on tight to it. Not too tight though, she wouldn’t want to break it. She was simply aware enough of what they had that she would never throw it away.
The woman didn’t have patience for the boy. She tightened her grip on his hand and pulled his arm. He turned back to look at the prison and his wide eyes locked with Audrey’s. The connection was immediate. The bond they shared by both loving someone inside the Monster Mansion. She hated that it was called that. The men inside were far from monsters. They were misunderstood by the many. If only time were taken to get to know them on a more spiritual level then the word monster would never be allocated to the place. The connection was broken as mother and child slipped between the stationary cars and they were gone.
Audrey found her Clio and climbed in. Looked back at the place she’d walked away from. Sent a silent prayer of love back to it and turned the car on.
Until next time, my love, until next time.