Luckily, for the group, for the first twenty minutes, Tom was present and answered questions about his books and his writing process.

View the video below to watch Tom’s Q&A and then the member’s discussion after he leaves. Overall it was a positive reaction to the book with the majority of members saying they would go on to read the next book in the trilogy.

I do have to say a huge thank you to Tom for attending last night to answer our questions, as it was in the middle of his working day. He still had to do the News at Ten! And we went over the time we said we would because he gave such brilliantly detailed responses. So Tom, I hope we are forgiven. I can say that you made your readers extremely happy.

Now to the vote for next month.

It’s a free month again, which means members were free to nominate any book in the crime genre that they wanted. No themes at all.

To vote for your book comment below. You have until the end of Friday.

The Art of Death by David Fennell 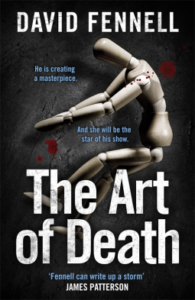 London’s latest art installation is a real killer . . . An underground artist leaves three glass cabinets in Trafalgar Square that contain a gruesome installation: the corpses of three homeless men. With the artist promising more to follow, newly-promoted Detective Inspector Grace Archer and her caustic DS, Harry Quinn, must race against time to follow what few clues have been left by a savvy killer. As more bodies are exhibited at London landmarks and live streamed on social media, Archer and Quinn’s pursuit of the elusive killer becomes a desperate search. But when Archer discovers that the killer might be closer than she originally thought – she realises that he has his sights set firmly on her . . . He is creating a masterpiece. And she will be the star of his show.

The Last Thing He Told Me by Laura Dave 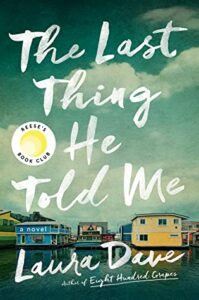 We all have stories we never tell.
Before Owen Michaels disappears, he manages to smuggle a note to his beloved wife of one year: Protect her.

Despite her confusion and fear, Hannah Hall knows exactly to whom the note refers: Owen’s sixteen-year-old daughter, Bailey. Bailey, who lost her mother tragically as a child. Bailey, who wants absolutely nothing to do with her new stepmother.

As Hannah’s increasingly desperate calls to Owen go unanswered; as the FBI arrests Owen’s boss; as a US Marshal and FBI agents arrive at her Sausalito home unannounced, Hannah quickly realizes her husband isn’t who he said he was. And that Bailey just may hold the key to figuring out Owen’s true identity—and why he really disappeared.

Hannah and Bailey set out to discover the truth, together. But as they start putting together the pieces of Owen’s past, they soon realize they are also building a new future. One neither Hannah nor Bailey could have anticipated.

The Craftsman by Sharon Bolton 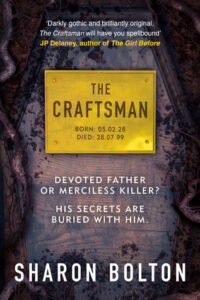 Catching him will make her career – and change her forever.

August, 1999
On the hottest day of the year, Assistant Commissioner Florence Lovelady attends the funeral of Larry Glassbrook, the convicted murderer she arrested thirty years earlier. A master carpenter and funeral director, Larry imprisoned his victims, alive, in the caskets he made himself. Clay effigies found entombed with their bodies suggested a motive beyond the worst human depravity.

June, 1969
13-year- old Patsy Wood has been missing for two days, the third teenager to disappear in as many months. New to the Lancashire police force and struggling to fit in, WPC Lovelady is sent to investigate an unlikely report from school children claiming to have heard a voice calling for help. A voice from deep within a recent grave.

August, 1999
As she tries to lay her ghosts to rest, Florence is drawn back to the Glassbrooks’ old house, in the shadow of Pendle Hill, where she once lodged with the family. She is chilled by the discovery of another effigy – one bearing a remarkable resemblance to herself. Is the killer still at large? Is Florence once again in terrible danger? Or, this time, could the fate in store be worse than even her darkest imaginings?

The Sanatorium by Sarah Pearce 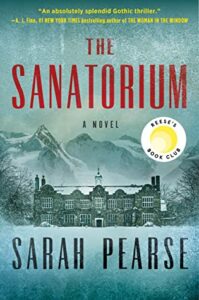 Half-hidden by forest and overshadowed by threatening peaks, Le Sommet has always been a sinister place. Long plagued by troubling rumors, the former abandoned sanatorium has since been renovated into a five-star minimalist hotel.

An imposing, isolated getaway spot high up in the Swiss Alps is the last place Elin Warner wants to be. But Elin’s taken time off from her job as a detective, so when her estranged brother, Isaac, and his fiancée, Laure, invite her to celebrate their engagement at the hotel, Elin really has no reason not to accept.

Arriving in the midst of a threatening storm, Elin immediately feels on edge–there’s something about the hotel that makes her nervous. And when they wake the following morning to discover Laure is missing, Elin must trust her instincts if they hope to find her. With the storm closing off all access to the hotel, the longer Laure stays missing, the more the remaining guests start to panic.

Elin is under pressure to find Laure, but no one has realized yet that another woman has gone missing. And she’s the only one who could have warned them just how much danger they are all in. . . 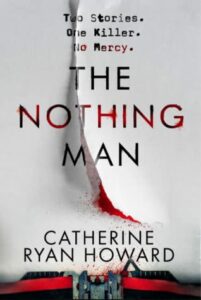 At the age of twelve, Eve Black was the only member of her family to survive an encounter with serial attacker the Nothing Man. Now an adult, she is obsessed with identifying the man who destroyed her life.

Supermarket security guard Jim Doyle has just started reading The Nothing Man–the true-crime memoir Eve has written about her efforts to track down her family’s killer. As he turns each page, his rage grows. Because Jim’s not just interested in reading about the Nothing Man. He is the Nothing Man.

Jim soon beings to realize how dangerously close Eve is getting to the truth. He knows she won’t give up until she finds him. He has no choice but to stop her first …

Cross her Heart by Melinda Leigh 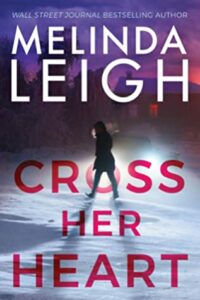 For more than twenty-five years, Philadelphia homicide detective Bree Taggert has tucked away the nightmarish childhood memories of her parents’ murder-suicide…Until her younger sister, Erin, is killed in a crime that echoes that tragic night: innocent witnesses and a stormy marriage that ended in gunfire. There’s just one chilling difference. Erin’s husband, Justin, has vanished.

Bree knows how explosive the line between love and hate can be, yet the evidence against her troubled brother-in-law isn’t adding up. Teaming up with Justin’s old friend, former sheriff’s investigator and K-9 handler Matt Flynn, Bree vows to uncover the secrets of her sister’s life and death, as she promised Erin’s children. But as her investigation unfolds, the danger hits close to home. Once again, Bree’s family is caught in a death grip. And this time, it could be fatal for her.