SEE NO EVIL, book 7 in the DI Hannah Robbins series, was released last week. You can download it HERE.

Today I am going to share the prologue with you. I hope you like it and it whets your appetite for the book to come.

When the police left him here, they’d told him he would be safe. He remembered the female officer’s words as he cowered under the duvet, waiting for the footsteps, for the creak of the door. For the hand on his wrist.

The quilt was warm and heavy, but it was a false protection. Their hands sneaked beneath and pulled him out by his arm. Dragging him out into the light from the dark.

This was not a one-off and eventually he learnt not to go alone with them. He took his friend for comfort. They’d never see his friend who was excellent at staying hidden, but he could always see him. Wherever he went, his friend followed. Faithful and loyal. Never looking away. He was safer in some strange way, because his friend was constant. Not being alone gave him strength.

They made him run as they threw objects at him. Made him a moving target practice. Aiming for his body so the bruises they inflicted could never been seen. Tears tracked silently down his cheeks as each item slammed into his small and fragile body.

To cry out resulted in a punishment. How this wasn’t a punishment he didn’t understand. Surely he was being punished for something he had done. He tried to be a good boy. He couldn’t remember doing anything that meant they would punish him this way.

But still they came for him.

It was all a game to them. It didn’t feel much like a game to him.

Soon it progressed. The running and throwing was not enough for them. They used wood to beat his small frame. He had to bend over as they slammed down the wood on his bony back and as they did he locked eyes with his friend and promised one day he would be safe. He promised he would survive this. It was the only way he got through those nights. Removing himself from where he was and melting into the heart of his friend who never let him down. Not once.

He couldn’t talk to anyone about it. But he had his friend. It was a one-way conversation, but he’d take it. Someone to confide in about the hurt and the bruises. The ridicule and the laughter. His total and utter misery. How he wanted to escape from this place. They could escape together. One day they would be free of here and they would be free together. The boy made a promise he would never forget his friend and how he shielded him from the pain of living through the torment alone. 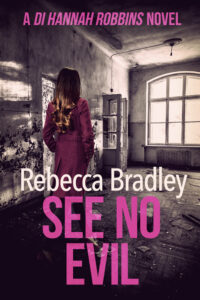 A brutal killer with a vicious calling card targets the older males in Nottingham. Are they connected or are the murders simply random attacks?

That is the question Detective Inspector Hannah Robbins and her team must investigate as they hunt down the monster on their streets.

But Hannah has just returned to work after a terrifying ordeal, and is still distressed as snapshots of the trauma plague her every waking moment.

Across town Amelia Vaughn, a senior Crown prosecutor, questions herself when a sensitive police file lands on her desk. However, things begin to look more sinister closer to home.

As the two professionals struggle to hold it together the murders become more frequent. The two women are on a collision course that no one could see coming. Can they each do what it takes to bring the killer to justice or will personal attachments result in another loss of life?

For fans of Angela Marsons and James Patterson