I love the book covers for the DI Hannah Robbins series but as the series has progressed, the style has changed a little and the later books have a look that is easy to define and is one I really like.

Because of this, I decided I wanted the earlier books to match the look, so starting with the first book in the series, Shallow Waters and redesigned it to match.

I’m thrilled with the new cover and want to share it with you.

Do let me know what you think! 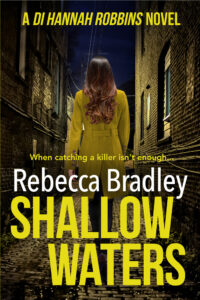 The dumped body of a girl is found in an alleyway, forcing Detective Inspector Hannah Robbins into the darker side of Nottingham. The scene is brutal, demanding Hannah bring closure to the girl’s media-hungry mother.

When Hannah arrests the killer it becomes clear that all is not what it seems. This was not a single act of violence. There is a long shadow being cast and a larger problem. And someone wants to stop Hannah from finding out the truth.

All the while a member of her team is hiding a life-changing secret that could have serious repercussions for the investigation. But Hannah is too distracted by the case to pick up the cues.

Things take a disturbing turn when Hannah finds evidence that indicates a killer is only a hairs-breadth away from claiming his next victim.

Just how far is she willing to go to save the next girl?