Streets of Darkness by A A Dhand 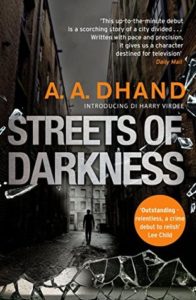 The sky over Bradford is heavy with foreboding. It always is. But this morning it has reason to be – this morning a body has been found. And it’s not just any body.

Detective Harry Virdee should be at home with his wife. Impending fatherhood should be all he can think about but he’s been suspended from work just as the biggest case of the year lands on what would have been his desk. He can’t keep himself away.

Determined to restore his reputation, Harry is obliged to take to the shadows in search of notorious ex-convict and prime suspect, Lucas Dwight. But as the motivations of the murder threaten to tip an already unstable city into riotous anarchy, Harry finds his preconceptions turned on their head as he discovers what it’s like to be on the other side of the law…

I listened to this book on audio.

Streets of Darkness is the first book in a series featuring Bradford detective Harry Virdee, released in 2016. And after reading it I’m left wondering what on earth took me so long to get around to reading it! I utterly LOVED it.

It starts when Harry finds a body on his morning run. The problem is he’s currently on suspension for an assault he committed off-duty the previous week. An assault we later find out he committed because of racism faced because of his inter-faith marriage to his wife Saima. So, with being on suspension he can’t be part of the team that investigates the murder, but his supervisor takes him to the side and asks him for his help. This murder, this body, it’s all part of a bigger picture and one that can cause untold damage to the city of Bradford. Can Harry look into it while he’s off-duty? Harry agrees.

Now, being a retired police detective myself and knowing this is never likely to happen, I did like this difference in the crime novel. I’m always happy to suspend my disbelief in my fiction reading if it’s a good story. So I followed Harry on his off-books investigation.

We see him follow the trail and also see his personal life. His relationship with his wife who is due to have their baby very soon. I loved Saima. I loved how the two storylines blended together. I’m a sucker for the personal side to a character’s story, not just the plot-driven side. I like to get involved and Streets of Darkness sucks you right into Harry’s life.

But don’t let that fool you. Streets of Darkness is as the title suggests, pretty dark. Bradford itself is at risk if Harry can’t resolve the issues in front of him and there are some pretty bad players on the scene. And those pulling the strings are quite unexpected. And no one is exempt from being dragged into the darkness either. There are plenty of twists and turns to keep you reading on into the night.

This might be a new-to-me series but I am very quickly going to catch up with the rest of the series now and I’d suggest, if you haven’t already sampled A A Dhand’s Bradford, that you do so as soon as you can. HIGHLY recommended.