Well, last night saw the first meeting of the virtual crime book club on Zoom. On the whole it went really well, but there were a couple of hiccups that spoiled it a little. The email software I used to send the meeting room link and password out didn’t send the email straight away (I sent it three hours before the meeting). One member didn’t receive the email until over two hours AFTER the meeting had finished. I was gutted. But it’s a learning curve. Next time I will send the link out the day before. I don’t ever want to miss a member again.

Other than that, the meeting went well. I think all members enjoyed themselves. We had a great conversation about the book and the characters. If you want to check out what you might have missed you can view the video below and I hope to see you next time.

Now on to the next meeting. All members agreed a three week turnaround is doable. Especially in this time of lockdown. So we’re going to choose the book straight away and get on with it again – you’ll get three weeks once the book is chosen, not from now.

We also discussed what books might be placed on the voting list for this next meeting. It was suggested that because the list was so strong last time that we use the same list again and add one where Peter Swanson’s book has been used. So, that’s what we’re going to do this time. Do feel free to suggest books for future meetings or suggest themes or sub-genres we can do, like magical crime, historical crime etc.

To sign up to the book club and to make sure you get into the meetings and never miss a vote or meeting, sign up HERE.

Below are the books you can vote on. Leave your vote in the comments. Voting closes Thursday evening and I’ll post the winning book on the blog and email on Friday. The book club meeting will then be three weeks on the Monday, so Monday 18th May at 8 pm BST (UK). 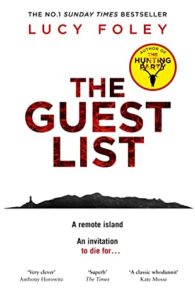 A wedding celebration turns dark and deadly in this deliciously wicked and atmospheric thriller reminiscent of Agatha Christie from the author of The Hunting Party.

On an island off the coast of Ireland, guests gather to celebrate two people joining their lives together as one. The groom: handsome and charming, a rising television star. The bride: smart and ambitious, a magazine publisher. It’s a wedding for a magazine, or for a celebrity: the designer dress, the remote location, the luxe party favors, the boutique whiskey. The cell phone service may be spotty and the waves may be rough, but every detail has been expertly planned and will be expertly executed.

But perfection is for plans, and people are all too human. As the champagne is popped and the festivities begin, resentments and petty jealousies begin to mingle with the reminiscences and well wishes. The groomsmen begin the drinking game from their school days. The bridesmaid not-so-accidentally ruins her dress. The bride’s oldest (male) friend gives an uncomfortably caring toast.

And then someone turns up dead. Who didn’t wish the happy couple well? And perhaps more important, why? 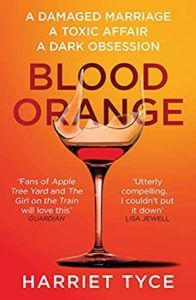 Alison has it all. A doting husband, adorable daughter, and a career on the rise – she’s just been given her first murder case to defend. But all is never as it seems…

Just one more night. Then I’ll end it.

Alison drinks too much. She’s neglecting her family. And she’s having an affair with a colleague whose taste for pushing boundaries may be more than she can handle.

I did it. I killed him. I should be locked up.

Alison’s client doesn’t deny that she stabbed her husband – she wants to plead guilty. And yet something about her story is deeply amiss. Saving this woman may be the first step to Alison saving herself.

I’m watching you. I know what you’re doing.

But someone knows Alison’s secrets. Someone who wants to make her pay for what she’s done, and who won’t stop until she’s lost everything….

A disturbing, toxic and compelling novel that explores the power of fear and desire, jealousy and betrayal, love and hate, BLOOD ORANGE introduces a stunning new voice in psychological suspense. 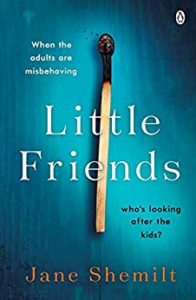 Their children are friends first. They hit it off immediately, as kids do. And so the parents are forced to get to know each other. Three wildly different couples. Three marriages, floundering.

There are barbecues, dinner parties, a holiday in Greece. An affair begins, resentments flare, and despite it all the three women become closer.

Unnoticed their children run wild. The couples are so busy watching each other that they forget to watch their children. Until tragedy strikes.

Because while they have been looking the other way, evil has crept into their safe little world and every parent’s biggest nightmare is about to come true… 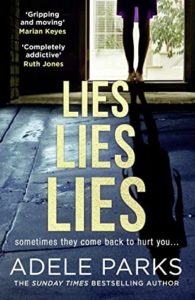 Daisy and Simon’s marriage is great, isn’t it? After years together, the arrival of longed-for daughter Millie sealed everything in place. A happy little family of three. And so what if Simon drinks a bit too much sometimes – Daisy’s used to it, she knows he’s letting off steam. Until one night at a party things spiral horribly out of control. And that happy little family of three will never be the same again.

In Lies Lies Lies, Sunday Times bestseller Adele Parks explores the darkest corners of a relationship in freefall in a mesmerising tale of marriage and secrets

The Other Mrs by Mary Kubica 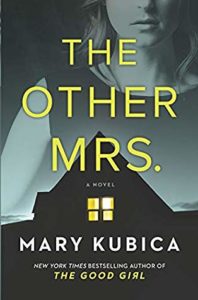 She tried to run, but she can’t escape the other Mrs….

Sadie and Will Foust have only just moved their family from bustling Chicago to small-town Maine when their neighbor Morgan Baines is found dead in her home. The murder rocks their tiny coastal island, but no one is more shaken than Sadie.

But it’s not just Morgan’s death that has Sadie on edge. And as the eyes of suspicion turn toward the new family in town, Sadie is drawn deeper into the mystery of what really happened that dark and deadly night. But Sadie must be careful, for the more she discovers about Mrs. Baines, the more she begins to realize just how much she has to lose if the truth ever comes to light.