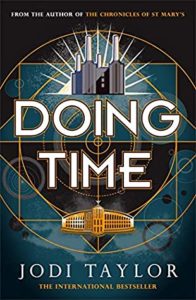 A long time ago in the future, the secret of time travel became known to all. Everyone seized the opportunity – and the world nearly ended. There will always be idiots who want to change history.

And so, the Time Police were formed. An all-powerful, international organisation tasked with keeping the timeline straight. At all costs.

Their success is legendary, and the Time Wars are over. But now the Time Police must fight to save a very different future – their own.

This is the story of Jane, Luke and Matthew – arguably the worst recruits in Time Police history. Or, very possibly, three young people who might just change everything.

At first look this doesn’t appear to be a crime novel, you would think it a time-travel novel. It is, in fact, a little of both. In essence, it’s the start of a new series which is a time-travel series, but in this first book, there is a murder that needs to be solved by the Time Police.

Jodi Taylor writes one of my favourite series, the St Mary’s Chronicles, another time-travel set of books. She is a brilliantly insightful and funny writer and if you haven’t read her books I’d suggest you do start with this one if you’re a bit of a crime fan as it has that familiar feel to it.

In this book, we follow Jane, Luke and Matthew who are new recruits to the Time Police. A police force who police the timeline from people who know how to time-travel and could mess up the timeline. Each of these new recruits has their own unique personalities. You love them for who they are. You believe in them and follow them and root for them, whatever trouble they may get themselves into. And boy, do they find themselves in some trouble.

Matthew is a character readers of the St Mary’s Chronicles will know, but it doesn’t prevent new readers enjoying the new series. He was really just a boy in St Mary’s and he’s rather grown up in this series and I liked the man he became in this. A little geeky still, sweet and intelligent.

Jane is my favourite character. She is strong and willful without knowing she is and when she stumbles unexpectedly upon a murder she initiates a set of events that could very easily run out of her control. The Time Police don’t quite do things the way policing is done here in the twenty-first century. They’re more a shoot first ask questions later kind of bunch. Though there are people on the inside who are trying to change this mindset. And with a shoot first mandate you don’t want to be on the wrong end of the order.

Jane, Luke and Matthew might break some rules but you always feel like you’re with them every step of the way. If you’re not shouting at one of them for some stupidity or other. You really do become invested in this and for me it’s the sign of a great book.

I listened to this on audiobook which is narrated by the fabulous Zara Ramm. It brings the book to life. But however you read this book, I think you will enjoy it. If you only usually read crime I strongly suggest during this lockdown you maybe venture into something a little different and try this. You really won’t regret it.