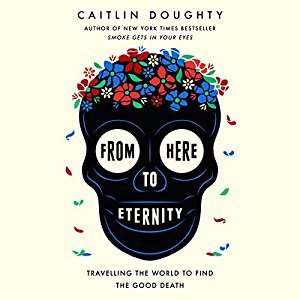 The best-selling author of Smoke Gets in Your Eyes expands our sense of what it means to treat the dead with “dignity.”

Fascinated by our pervasive terror of dead bodies, mortician Caitlin Doughty set out to discover how other cultures care for their dead. In rural Indonesia, she observes a man clean and dress his grandfather’s mummified body. Grandpa’s mummy has lived in the family home for two years, where the family has maintained a warm and respectful relationship. She meets Bolivian natitas (cigarette- smoking, wish- granting human skulls), and introduces us to a Japanese kotsuage, in which relatives use chopsticks to pluck their loved- ones’ bones from cremation ashes. With curiosity and morbid humor, Doughty encounters vividly decomposed bodies and participates in compelling, powerful death practices almost entirely unknown in America. Featuring Gorey-esque illustrations by artist Landis Blair, From Here to Eternity introduces death-care innovators researching green burial and body composting, explores new spaces for mourning— including a glowing- Buddha columbarium in Japan and America’s only open-air pyre— and reveals unexpected new possibilities for our own death rituals.

I listened to this book on audio and loved the narration as it was narrated by the author herself. She has a fabulous voice to narrate with and I could have listened to her for hours more.

As for the content of the book, I also loved it. I have read Doughty’s previous book Smoke Gets in Your Eyes and enjoyed that so I knew I would also enjoy this one.

Doughty did as the title suggested and travelled the world and looked at the way different cultures took care of their dead. She herself is a mortician and believes that the way they deal with death in the US and Western cultures in particular is very closed off, as though they are scared of the dead. The US embalm their dead. Try to preserve them, fill them with awful things so they continue to look good rather than be natural. This doesn’t work well for the Muslims in the country who want to wash their dead and bury them the same day.

Doughty is very much into a more natural way of death and the first one we looked at was the one and only open pyre in the US. It was fascinating to listen to. A small town has had permission to have this pyre built and only citizens of the town can use it. At first they were scared and anxious of it, but they have grown to love the whole process and some people even move to the town so that they can have a pyre funeral when they die. (Pyre like Vikings – open and set fire to.)

In the UK a pyre was illegal until a 2010 ruling when a court ruled open pyres were legal as long as they were in a building. A Hindu man is still fighting his cause for this and has a lot of support. People offering him land for his pyre. You can read more on that HERE.

And this is an excerpt from the book on the US pyre and its use, HERE.

We looked at a more hands-on way of dealing with death in Indonesia where the family take the dead out of their graves and spend time with them. These people really were not afraid of their dead, no matter the condition they were in.

In Japan there is a corpse hotel and in Spain there isn’t enough ground for everyone to be buried so you get five years in a grave then you are dug up and then thrown in a pit with all the other bodies that are in there.

There are lots more interesting places and customs that I haven’t mentioned. It really is a fascinating book and I would recommend it to anyone to consider what death is and what death means to us. It really shouldn’t be something we fear, as those left behind. A great read.