I’m thrilled to announce that The Twisted Web is released into the wild today. Yes, you can pick up a copy for your Kindle right now. There will be a paperback and audiobook to follow, but today you can get the ebook. 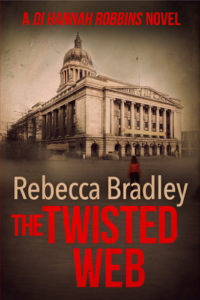 A social media shaming. A killer with a message. A deadly combination.

When the body of a man is left in the city centre set up as a realistic police crime scene, DI Hannah Robbins is forced to enter a world that can break a person, a case and a reputation.

Social media platforms light up and Hannah is pitted against the raging online monster and a killer who has already lost everything.

Can she catch the killer and put him behind bars or will she become part of his sadistic game?

Today I am going to share the prologue with you. This scene shows you how the whole story starts. How easy it is for an incident to be misrepresented. I hope you like it!

The day felt like any other day. Work had given Drew a headache. The kids were unruly. It was the last week of school before the summer holidays and no one wanted to focus on lessons. The heat soaked through the glass windows as though they were sitting in a greenhouse and the smell of overripe hormonal teenagers swelled within the room. He attempted to open some windows but paint had sealed them shut. Only he had never noticed in the past because this was a new room to him and he’d never had the need to open them before because, well, the UK weather, you didn’t need to say any more, did you?

He’d been given the room after Mr Forbes had retired the previous year. Five years early. Citing the need to live his life while he was still young enough. The need to see the world. He knew what Forbes really wanted was to get away from these bloody kids. The little fuckers sucked the spirit straight out of you and he was right, he probably did need his life. It was kind of important to you.

So, here he was now, relieved to have made it through another day, with just two more left. Then six blissful weeks away from them. It wasn’t that he hated being a teacher. He loved it really. Or he used to love it and he loved the idea of infusing the adults of the future with the knowledge of today. To see where it would take them. Especially in his subject of computers. It was where the world lived and ended. It was where all the huge advances were being made. Though all the kids cared about were the games they could play. There was only the odd child or two who was interested, and this had gradually withered his soul away. Without the symbiotic nature of children needing to be fed, his need to feed them his knowledge dried up.

It was sad really.

Drew was desperate to make his mark and imprint on a child. Have them grow up, make something of themselves and say it was him, he was the teacher who had been the one to spur them on. He was that teacher.

As it was, he couldn’t even find that pupil. All he could do was turn up every day and do his job. Then wait for the end of day bell so he could release them all back to their homes, their gaming stations, their junk foods, their vacuous lives. And he would go home. To his wife and his children. Who, he adored, he did. He did his best by them. By his wife. They liked to do things together. Spend time as a family. He nurtured their brains. He loved them.

All this floated through his head as he meandered down the street, sleeves rolled up past his elbows, the summer sun resting on his skin.

In front of him, a street artist was busy at work. One of those who made it appear that the pavement was opening up in front of you, yawning open, the innards of the street below, the wires and the pipes exposed and cracking open. Water bursting forth and upwards. All with a few chalks which she had scattered around her like the hem of a skirt.

He was mesmerised by the image. It looked as though the submerged world was screaming to be allowed out.

People were gathered around the woman and the image. Camera phones wafted in the air. The pavement was choked as everyone stopped to stare.

He looked at the woman surrounded by her chalks, covered in coloured dust. How he would love to have a job so freeing. Or just to feel the love he once had for the career he had chosen. Instead of this heavy weight he carried around with him.

He looked down, marvelled at the detail. At the love that had gone into it. Stepped sideways into the road rather than across her masterpiece. The traffic was steady, aware of the crowd bulging out into their space.

It was difficult to walk and not continue to look down at the cracked-open pavement. The layers of earth, and as he looked closer, the creepy eyes that glowed from within darkened corners.

With each step he could hear a thrum that didn’t fit with the rest of the sound around him. It wasn’t the mumble of awed voices. It wasn’t the regular hum of traffic. This was different. He looked up.

In front of him, also on the road, was a young lad. Tracksuit bottoms, jacket and a woollen hat even though the sun was out. His clothes were dark but they looked dirty, uncared for.

Homeless. About nineteen years of age. His face, like many others, was also turned towards the image on the ground.

The thrum had turned into a roar. Drew looked past the young homeless man and saw a vehicle do a rapid and dangerous overtake. Revving hard. Coming towards them. The driver with a phone in his hand. The car too close to the kerb. He hadn’t noticed the bulge of people that distended out from the pavement. Drew stepped back onto the pavement. Gently. Aware still of the cracked-open street below his feet.

He looked at the young man who looked back at Drew confused as to why he’d decided to stand up on the edges of the chalk drawing. Completely oblivious to the vehicle behind him.

The car was racing forward and wasn’t going to stop. It was going to plough into the homeless guy. Everyone else had their backs turned.

Drew panicked, grabbed hold of the young man’s upper arm, which was slender under the bulk of his clothing, and yanked him sideways up onto the path. The vehicle turned left with a screech of tyres, disappearing out of view.

The homeless lad came flying towards and past Drew, his legs wheeling under him as he attempted to avoid kicking the woman sitting on the ground. He stumbled as he Bambi-hopped over her outstretched leg, arms windmilling before he fell in a heap on the ground, a bundle of bones in a bag of jersey material topped by a woollen hat. The artist’s mouth was agape, a sheen of fear glossing her face as the young man’s head smashed into the wall with a crunch.

‘What the fucking hell!’

To Drew the scream came out of nowhere. He was trying to focus on the boy on the ground. On what had just happened when the high-pitched screech fractured Drew’s confused mind.

He ignored it. Presumed the fury was about the vehicle that had driven like it was on a racing track. His thoughts were securely on the boy and if he was okay. With movements that felt sludge like he made a move forward. Panic started to rise and people rushed to the boy. People flapped and fussed. Crouched down beside him. Held his hand, checked his head.

And they pushed Drew out of the way.

He’d saved the boy’s life. He needed to make sure he had saved it and not injured him in the process. But he couldn’t get to him. The boy was utterly surrounded.

It was almost as though they were keeping him at bay.

As though they didn’t want Drew near the boy.

He had saved his life. Drew was confused.

A woman turned from where she was bent over the lad. ‘What did you do?’ Horror was etched on her face. Disgust. He didn’t understand it.

‘I saw it. I saw him do it,’ another shouted over to her.

And then a young lad behind him piped up, ‘I caught it all on my phone. I was taking a video of the chalk drawing. He won’t get away with this.’

Buy it on Amazon now.