I am thrilled to welcome Catherine to the blog today to talk about her revisions process.

Catherine is from Cork, Ireland and now lives in Dublin. Her debut novel, DISTRESS SIGNALS, was an Irish Times and USA Today bestseller and was shortlisted for both the IBA Crime Novel of the Year and the CWA John Creasey/New Blood Dagger Award. Prior to writing full-time, Catherine was a campsite courier in France, a front desk agent in Walt Disney World, Florida, and a social media marketer for Penguin Random House Ireland. Catherine started her writing career self-publishing light-hearted travel memoirs and she has taught workshops on the subject or the likes of Faber Academy, Guardian Master Classes and Publishing Ireland. She has just completed a BA in English Literature at Trinity College Dublin as a mature student and is currently working on her third novel, REWIND.

It’s been different for every book so far. The very first draft of Distress Signals was only 50,000 words or so and couldn’t be read as an actual book – there were some chapters where I’d just written a line or two about what would happen, I was just so desperate to get to the end and sort out of the story in my own head. The first draft of The Liar’s Girl was book-length, but bore very little resemblance to the actual finished book two drafts later. I’m just getting to the end of the first draft of my third novel, tentatively titled Rewind, and I really don’t know what kind of shape it’s in. Good shape, I hope, but we’ll wait and see what my editor thinks!

Forget about the book for as long as I can, which is usually only two or three weeks.

I like to get my agent and editor involved at the earliest opportunity, so I will have plenty of editorial feedback on my first draft. We all know that it’s just a first draft but I find it hugely helpful to get outside eyes on it as soon as I can. Trust me when I say they help me assess the damage!

Definitely can’t assess it objectively myself – I think it’s impossible to read your own book like a reader, or even an editor. Everything in it makes sense to you because if it didn’t, you’d have written it another way. I definitely need an objective opinion. Having said that, I don’t allow anyone else to read it. I would never give an early draft to family or friends – even writing friends – for instance.

For me, the first draft is about building the structure of the book, the plot. So when I come to the second draft my main focus is on characterization.

I don’t even handwrite shopping lists anymore – everything happens on a computer.

It depends on your definition of messy. I actually retype/rewrite the whole thing while I find that so much easier and cleaner. I have a big computer screen and I will have two documents open it: the previous draft and a new document that will serve as the next one. I can’t go in and make changes in the existing text because I find that so messy – I’m actually getting agitated just thinking about doing that! I like retyping because everything starts to flow, and I usually have a few good or at least better ideas about other things I can change as I go along.

Again, it depends. Revising Distress Signals was very little work. Revising The Liar’s Girl was like writing a whole new book – over three drafts, almost nothing survived from the first draft except for the character names and the big plot turns.

I can’t really say without giving the ending of Distress Signals away! But I discovered that by making one small change in the text, the book would get a massive extra twist. So very little work for me, but big impact. 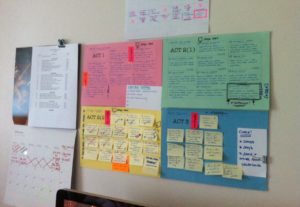 I love a good spreadsheet. I also like to keep a wall calendar and write my daily word count in every day. It has a great psychological effect in that sometimes you’ll sit down to write 100 words just so you don’t have to write zero in the space for today – and of course, you’ll end up writing more than that, almost always.

Definitely the revision process. I would revise until the cows come home. I hate the first draft – that’s the worst bit! I like when I have my raw material and all I have to do is sculpt it.

Hopefully not more than 4-6 weeks and hopefully ready for copyedits! 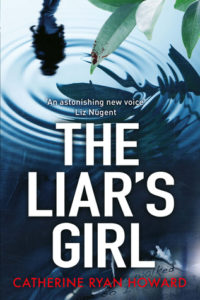 Will Hurley was an attractive, charming, and impressive student at Dublin’s elite St. John’s College-and Ireland’s most prolific serial killer. Having stalked his four young victims, he drowned them in the muddy waters of the Grand Canal. Sentenced to life imprisonment when he was just nineteen, Will is locked away in the city’s Central Psychiatric Hospital.

Freshman Alison Smith moved to the Big Smoke to enrol in St. John’s and soon fell hard for Will Hurley. Her world bloomed … and then imploded when Liz, her best friend, became the latest victim of the Canal Killer-and the Canal Killer turned out to be the boy who’d been sleeping in her bed. Alison fled to the Netherlands and, in ten years, has never once looked back.

When a young woman’s body is found in the Grand Canal, Garda detectives visit Will to see if he can assist them in solving what looks like a copycat killing. Instead, Will tells them he has something new to confess-but there’s only one person he’s prepared to confess it to. The last thing Alison wants is to be pulled back into the past she’s worked so hard to leave behind. Reluctantly, she returns to the city she hasn’t set foot in for more than a decade to face the man who murdered the woman she was supposed to become.

Only to discover that, until now, Will has left out the worst part of all …