It’s back, the writing series that was so popular last year! Tomorrow sees the return of the Revision process series, but today I have crime author, Chris Simms here to talk about his first draft process. 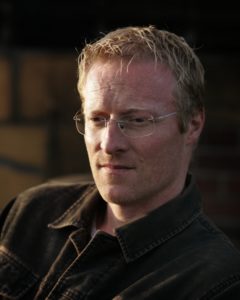 Chris has worked in airports, nightclubs, post offices and telesales centres. He now lives in Marple with his wife and four children.

Along with nominations for the Theakston’s Crime Novel of the Year award and Crime Writers’ Association Dagger awards (for his novels and short stories), Chris was selected by Waterstone’s as one of their ‘25 Authors For The Future’.

A Price To Pay, audio book, is the second book in a series with a female lead character: Detective Constable Iona Khan of Manchester’s Counter Terrorism Unit.

Reviews for Chris include include these:

Try not to think about what the book’s title will be. It always feels premature, but I can never resist. Sometimes I nail it early on, other times it becomes an annoyingly pleasant distraction.

After 16 novels, an approach has emerged – though I try not to become straitjacketed by it. A3 paper for broad brushstroke thoughts on the plot, which soon link into a mindmap, then a rough time-line, then actual sketches of the main characters to help crystallise them in my  mind. 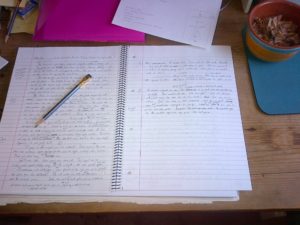 Pencil and a lined A4 pad – and I only write on the left-hand sides. This leaves the facing sheet free for later additions / edits / notes to self.

I have to take care not to let the research carry me away – but it’s so damn enjoyable! Especially when I can see how it will weave itself into the plot. The danger is that it starts to impede or obscure the actual story.

The internet as a starter, but I like to get out of the house and visit places or see people face-to-face. As a result, I’ve ended up in some dodgy situations (Saddleworth Moor, at dusk, with no torch) and I’ve also met senior investigators in organisations like Manchester’s Fire and Rescue service, the RSPCA and the Immigration Service. It always amazes me how generous people are with their time.

Stuff soon accumulates in the form of print-outs, newspaper snippings, leaflets and post-it notes. So a big plastic folder acts as a collecting place. As I get further into the plot, I’m sad enough to start a proper, indexed, A4 file. It’s geeky, but it saves so much time double-checking material at the editing stage.

It’s a simple progression of my A3 mind map. I’ll form 3 or 4 sentence summaries for about 5 chapters, then start writing. Once they’re done, I repeat the process. Most of my novels come in at about 40 chapters long.

I write with a Blackwing pencil – ‘half the pressure, twice the speed’ according to the lettering down their sides. This I sharpen with a posh, two-hole, sharpener. The shavings are carefully collected and end up in a wax-stoppered test tube as a slightly odd memento of the whole bizarre process that is writing a book.

Totally lost. I write in an outside shed with a little heater and have been nearly given a heart-attack by family members suddenly opening the door without warning. They now all know to knock gently and open slowly…

As I go, using that blank facing page!

Six sides of A4 equal about 3,000 words. I’m happy with that as a daily target, though sometimes I hit ten sides.

About six months. But another five or six versions lie ahead. Usually refinements rather than rebuilds, thankfully.

Paper: it gives me a sense of how the actual book will be. Plus, a lot of studies suggest your brain skitters across information if it’s read from a screen.

That’ll be the pub, while the first dread thoughts of typing up 90,000 words ruin my pint…

You can find Chris at his Readers club | Facebook | Amazon 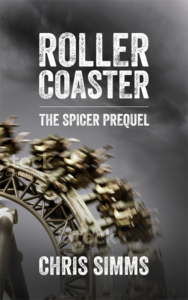 A fun night out. A fatal attack. A fight for justice.

Discover the dramatic event that spurred Jon Spicer into joining the police.

The distinctive storytelling skills of Simms run through this fast-moving account of one man’s dogged pursuit for justice.

Read the rest of the First Draft series HERE.