Today I’m going to talk about an entire series I’ve read, rather than just one book. And that series is the St Mary’s Chronicles by Jodi Taylor.

The Chronicles of St Mary’s by Jodi Taylor 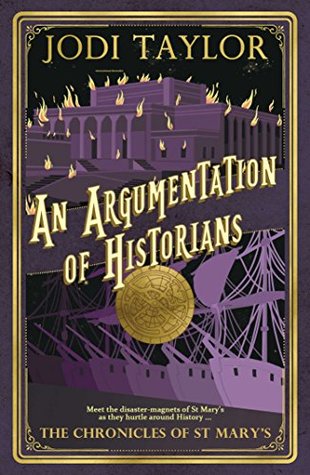 Behind the seemingly innocuous façade of St Mary’s, a different kind of historical research is taking place. They don’t do ‘time-travel’ – they ‘investigate major historical events in contemporary time’. Maintaining the appearance of harmless eccentrics is not always within their power – especially given their propensity for causing loud explosions when things get too quiet.

Meet the disaster-magnets of St Mary’s Institute of Historical Research as they ricochet around History. Their aim is to observe and document – to try and find the answers to many of History’s unanswered questions…and not to die in the process. But one wrong move and History will fight back – to the death. And, as they soon discover – it’s not just History they’re fighting.

The above is the start of the blurb of book one Just One Damn Thing After Another and it covers the rest of the books through to 9. Plus the novella between them – which I have also read/ listened to. This is the basic concept of what the books are about.

I listened to the entire series on audiobook and I think this had as much to do with my enjoyment of them as the books themselves, because the narrator, Zara Ramm was absolutely perfect for the job! She really brought the books and the characters to life. It’s told in first person point of view so Ramm was, in fact, the protagonist Madeleine Maxwell, also known throughout the books as Max.

I have to say, that though I enjoyed the first book, and I obviously did because I went on to book two, the series just got better and better as it got on because I became more and more invested in the characters and you would not believe what Taylor put those poor characters through. Do not think that just because this is not a crime series that it is a gentle read. Yes, it is quite light-hearted at times and at others it is deeply grim as they deposit themselves in difficult and bloody areas of the past and Taylor really hurts her characters, both emotionally and physically. She does not shy away from pain but neither is it gratuitous or enjoyed. Ramm dealt with it perfectly. Moving between difficult and painful scenes and back into a more “normal” step easily and like a narrating pro. Let me just warn you, if you think this isn’t for you, character die in these books. And not just off the page characters but characters you know. And no one is safe. Think Game of Thrones for that kind of thing (though disclaimer – I haven’t seen it, but have heard of the legendary death knell) but for time travel.

As well as the above, these books are also quite light and funny. It’s a perfect mix actually.

Max is a wonderful character. She is likable and determined and won’t leave anyone behind. She often throws up a prayer to the God of Historians when all hell is breaking loose and she will have your back. She is also not capable of going on a “jump” without it going completely wrong.

Seriously, if you have never tried a time travel book, fancy reading outside of your comfort zone then give this a try. Yes, it may well not be for you. We can’t all like the same things. I’d also suggest pushing past book one because it tends to get a bit more personal and character driven then. But, after reading all the books in the series this year I am now waiting rather impatiently for Ms Taylor and Ms Ramm to create book 10 in audio so I can devour it and wait for the next one!