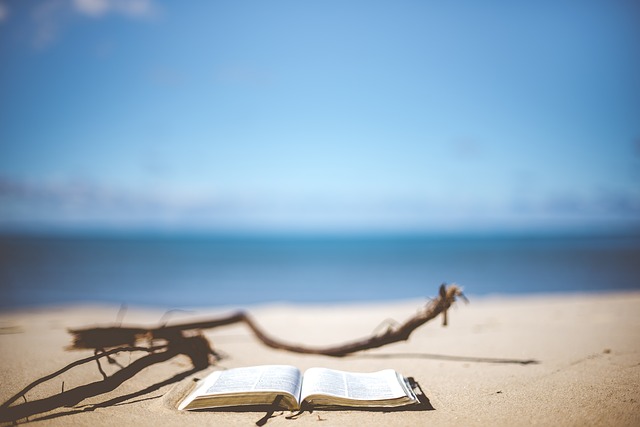 This is the age-old question that has haunted authors and publishers for decades – for as long as social media has been around anyway. Can social media sell books?

My personal opinion has always been that it can, but that it depends on what you mean by selling books and how you propose to do it. Of course the tweets that shout out “buy my book” are never going to work. Especially when it is repeated on a loop with no other content coming out from that account. But, I know that I buy books based on what I’ve read on my social media timeline. Recommendations and even when a book that has been on my peripheral vision suddenly pops up as being discounted, I’ll then buy it. So, I realised I couldn’t be the only one. I am not an outlier.

But, just because I buy books based on my social media activity it doesn’t go any way to proving that social media itself sells books does it?

So, I did a couple of polls. I ran polls both on Twitter and on Facebook (and I’m going to have to try to get the images of these polls into this blog post, aren’t I?!)

The first question I asked the good people of social media – Twitter first – was;

Do you buy books you see on Twitter? They can be new and raved about or gloriously discounted. But, you’re buying it having seen it on here.

The final result was 84% of people did buy books after seeing them mentioned on Twitter, with only 16% saying they didn’t. 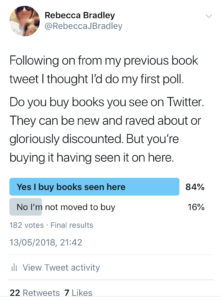 Some of the comments I received during this poll were as below;

“I get a few from Twitter… I first heard about your latest book from one of your tweets and pre-ordered it.” @swirlingair

‘I recently read three books… having seen them here … Twitter works for me read some great stuff.” @RobbieArrand

“Find books from fav authors, which I may otherwise have missed, and loads of recommendations. Twitter useful that way – one of the reasons I use it…” @AiberdeinQuine

“I’ve discovered so many new authors and fantastic books since joining Twitter. It’s just having the bank balance to keep up!” @deborah_masson

And, over on Facebook I asked the same question. 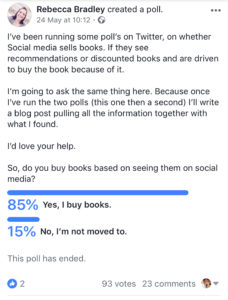 As you can see the results were pretty conclusive. And pretty much identical. 85% said yes they did buy their books from social media and 15% said no. This time only 93 people voted but it’s still a decent turnout.

I’m not going to name commenters on Facebook because it’s more of a closed platform, though my page isn’t closed the accounts themselves usually are. But these are a couple of the comments;

“Sometimes, but not from ads… I tend to buy from links in discussions about books-recommendations usually.”

So, it looks like the answer to the question is that YES, you can sell books via social media.

The next question we need to look at to get a fuller picture is what sells better? Book recommendations or discounted books? 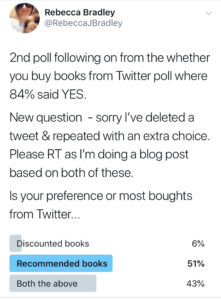 As you can see, we have a split between recommended books and both the options of recommended and discounted, which looks to be that there is a leaning to recommended books. So, have people talking about your books, being excited about them on social media. But also have some discounts. It won’t hurt. People will buy. 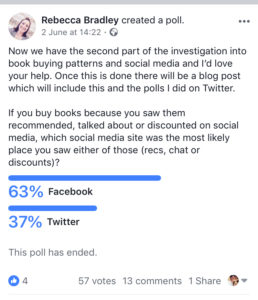 I think if I had asked the same on Twitter the answer would have leaned towards Twitter. I certainly got more interaction on Twitter. But then again there are some very interactive book groups on Facebook where they talk incessantly about books, so, you just need to get your book into the right hands, get them raving about it and it could take off.

My opinion after doing this?

It hasn’t changed from when I started. I do believe that social media can sell books. It’s all about how you do it. It’s about being social and about being natural. People are buying based on recommendations and discounts. If they’re hearing about your book naturally. So yes, put it in front of them, but don’t be aggressive about it. And if other people start talking about it, then they’re really going to be interested. Enjoy the experience of social media but be aware of the power of it.

What do you think after reading this? Has it made you change your mind in anyway?