Today I am pleased to welcome Alison Morton to the blog to talk about her three books. 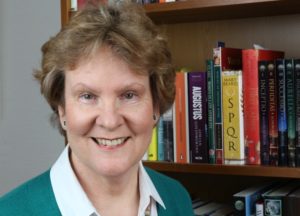 All six Roma Nova full-length novels have been awarded the BRAG Medallion. SUCCESSIO, AURELIA and INSURRECTIO were selected as Historical Novel Society’s Indie Editor’s Choices.  AURELIA was a finalist in the 2016 HNS Indie Award. SUCCESSIO was selected as an Editor’s Choice in The Bookseller. CARINA is a novella set between INCEPTIO and PERFIDITAS.

A ‘Roman nut’ since age 11, Alison has misspent decades clambering over Roman sites throughout Europe. She holds a MA History, blogs about Romans and writing.

Now she continues to write, cultivates a Roman herb garden and drinks wine in France with her husband of 30 years.

The Children of the New Forest by Captain Marryat. Published in 1874, the story follows the fortunes of the four Beverley children from a Cavalier family ­– Edward, Humphrey, Alice and Edith – who are orphaned during the English Civil War. Jacob Armitage, a local forest verderer, hides them in his isolated cottage and disguises them as his grandchildren. Hidden from their Roundhead oppressors in the shelter of the New Forest, they learn to live off the land. The eldest son, Edward, first works for the local Roundhead New Forest intendant, then goes off to join the exiled Charles II and returns in the 1660 restoration. Edward is the main focus but the story of all the children growing and maturing in the seventeenth century was fascinating to a child of the mid-twentieth century.

The book is fairly black and white in idealising chivalry, bravery, self-reliance and consideration of others. But Marryat introduced shades, primarily in the sympathetic portrayal of the strict but fair Roundhead Intendant Heatherstone. I loved the danger, the bravery and the hunted children outwitting their Roundhead hunters and remember being struck that ‘goodies’ were not always good and ‘baddies’ sometimes turned out to be good. This book made the child me think about growing up, survival, values, and not always taking people for what they initially seemed to be.

What book will always stay with you and why?

Although I read it at fifteen, I still return periodically to These Old Shades by Georgette Heyer. Yes, we have silks and velvet and a touching love story peppered with fashionable ladies, a bonkers, courageous but dim brother and a loyal best friend, but it’s also a story of a blood feud, child abuse and vengeance. The ‘hero’ is powerful, amoral and hard as steel, the heroine forced to live in a slum after a rural background. Build up to and revelation of the secret is shocking each time I read it, even though I could recite the book almost line by line.

I first learnt the power of dialogue and the benefit of minimal, but adequate description in world building from this book. I didn’t realise that was what I loved when I first read it. But unlike may books I now re-read as a writer and am disappointed by, These Old Shades remains as vibrant, clever and emotionally engaging as ever.

One book you are looking forward to reading?

I haven’t studied the 2018 lists, but I shall look forward to Pandora’s Boy, the next in the Flavia Albia series by Lindsey Davis, out in April. Famous for her witty, irreverent and put upon Roman detective Falco living in 1st century AD Rome, Davis branched out in 2013 into a new series featuring the now retired Falco’s adopted daughter. Albia is in her thirties and a just divorced woman when we first meet her. After five books, she’s maturing wonderfully. With a Lindsey Davis book you get a good mystery, solid if prickly characters, impeccable historical research and sparkling, clever dialogue. A treat indeed! 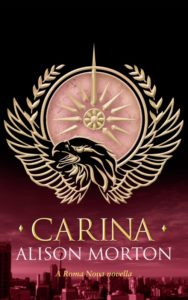 Carina Mitela is still a young inexperienced officer in the Praetorian Guard Special Forces. Disgraced and smarting from a period in the cells for a disciplinary offence, she is sent out of everybody’s way on a seemingly straightforward mission overseas.

All she and her comrade-in-arms, Flavius, have to do is bring back a traitor from the Republic of Quebec. Under no circumstances will she risk entering the Eastern United States where she is still wanted under her old name Karen Brown.  But when she and Flavius discover a conspiracy that reaches to the highest levels of Roma Nova, what price is personal danger against fulfilling the mission?

Set in the time after INCEPTIO but before PERFIDITAS in the Roma Nova series, this thriller novella reveals hidden parts of Carina’s early life in Roma Nova. And North America isn’t quite the continent we know in our timeline…