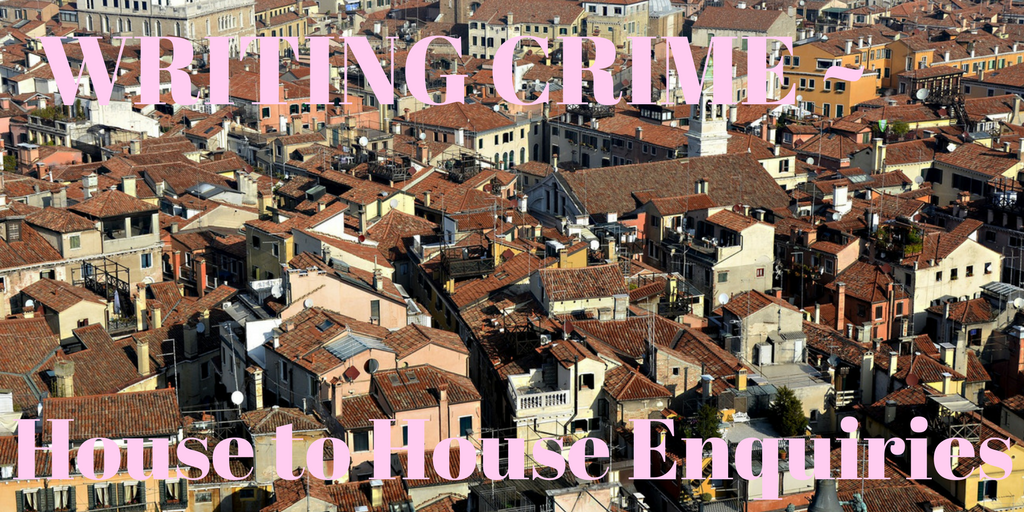 Very often in crime novels, the SIO (Senior investigating officer) will send staff out to do H2H (house to house) enquiries. This is because it is something that is done in many investigations, from burglaries to murders, but do you know the point of the house to house or what is happening during the process?

Not only are you canvassing for witnesses, but you are establishing who lives and works in a particular area and then obtaining an account of their movements during relevant timescales.

House to house doesn’t have to be confined to housing estates. If the crime has been committed in an industrialised area, then the same principle applies and enquiries are made at the business addresses.

Your SIO needs to develop a strategy for their house to house enquiry.

Before you start your house to house, you need to set parameters on where you are going to conduct these enquiries. Premises with a line of sight of the scene. Location with access and egress of the scene, where the offender could have made good their escape and of course their entrance. It is this consideration, the access and egress area that could widen your scene considerably. Especially if you have a rabbit warren of a housing estate where the offender could have run down any alley to escape.

After setting your parameters, you need to analyse it, to see if there are any persons within its boundaries you need to be aware of, for whatever reason. Persons of interest for the offence or persons who have violent offences registered against them and may pose a risk to a police officer of PCSO knocking on their door. You may have persons who are wanted on warrants within this area you have defined. All this, as SIO has to be borne in mind.

Your suspect could live or work in the area where the crime has been committed. Details of everyone you speak to need to be recorded, including descriptions, where they were and what they were doing.

Witnesses could have witnessed the incident or events leading up to the incident. They may have sightings of the victim or offender before or after the incident and be able to provide detailed information on this. Vehicles or property. They may also be able to give you details of other witnesses you can approach.

All of the above feeds in to start to fill in the picture you are getting of what happened.

The officers conducting the house to house will have a questionnaire and this can be tailored to suit the specific job that is being investigated.

The police presence is also providing a much-needed reassurance after the difficult events that have occurred in this community.