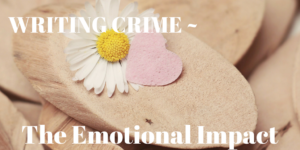 I thought I’d look at things a little differently in today’s Writing Crime blog post. Instead of writing a factual and procedurally correct post, I’m going to write something from a personal point of view. I’m going to go back to my days in the job and delve into how it felt when I was dealing with the really difficult stuff. Because not only do you have to get the procedure right in your books, but you want to get your characters right. How might they be feeling and how might they deal with those feelings?

So, this is a personal post. This is my experience of policing. My emotional experience.

The one and only time I remember crying after a job at work was when I was in uniform and I’d attended a road traffic (accident – as it was called then, it’s now called a collision.) It wasn’t that the driver hadn’t lived, after all, he wasn’t my first dead body by any means. It wasn’t that he was particularly messed up, because he wasn’t. It was the senselessness of it. Of how it had happened. The circumstances, the age, the shock. I don’t think I even cried when I got back to the station. I think I cried the next night. (I was on nights at the time.) I was still too shocked when it first happened to have any feelings. After that though, I did feel and it was painful. I felt helpless. Useless. I was in the job to help and I’d not been able to do anything. He was already dead when I arrived on scene. I was first on scene. My shift (the people I worked with) were great. There’s a real camaraderie in uniform.

Scroll forward several years and I’m on a specialist unit dealing with sexual exploitation in all its guises. From the online world of images to grooming, to real-life exploitation from grooming to trafficking. The whole gamut you can begin to imagine. I saw it all. I saw the world in all its seedy glory. I began to think the world was a dark place where sane, kind nice people didn’t exist. All I could see was darkness. I worked in this world for over 7 years. We were overrun with work.

The image jobs, the jobs where offenders had indecent images on their computers, they had hundreds of thousands and we had to view them all to see what kind they were looking at. They were extremely dark weeks when you were on viewing duty. What you had seen at work would pop up in front of your eyelids when you closed them at night. It was horrific. There was no option but to open your eyes again and hope sleep took you without you noticing. Once you’d stopped viewing, this would eyelid thing would cease. But – my brain still has these images stored in there somewhere and it could bring them up if… well, let’s just say, writing this post is wriggling something loose and I have to type quickly before it’s dislodged. My point is, you can’t unsee something horrific once you’ve seen it. Your brain is a powerful tool and you have absolutely no control of it whatsoever. Remember this in your writing.

But… how did I cope working on that department for so long, you may ask? For 7 years! And I only left because I had to medically retire. That’s another question you need answering for how your character can work in homicide. Seeing the stuff they see and the darkness around them.

Other than the image job which your brain controls, the other jobs, the jobs where you’re talking to victims, talking to offenders, doing the paperwork for all this nasty work, where you know the world is a nasty place, well, you do it all and you compartmentalise it. Leave it at work. You put it in a little box in your brain and shut it away. You then go home and you find your small corner of decency and enjoy it. Yes, your worldview is a little skewed. It really is. But you do the best you can to enjoy your own life away from the office. To forget it when you walk out of work. To leave it behind.

Since I’ve left I’ve worked hard to forget what I know. I’ve worked hard to fit back into the normality of everyday people who haven’t seen what I’ve seen. And I’m as about there as I’m going to be. You’ll never take the stuff out my head that’s in there. But I no longer see the world as a dark place. I see it as everyone else sees it – I follow the news and just worry about that stuff!

Below is a TED X talk by John Sutherland, a retired high-ranking Met police officer who dealt with a lot in his role and then had problems. His honesty is refreshing.

I do hope this has helped for any character development you may be considering.