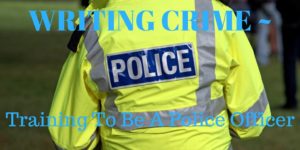 Last Week I wrote a post on how you trained to be a police detective. But, how do you get to that step? You have to start somewhere (Unless you’re going straight into the Met’s detective scheme which we covered last week!) and that somewhere is as a uniform police constable.

So, let’s have a bit of history for your detective in your novel. How did they get to where they are? What did they have to go through first?

Before they let you loose on the streets, your force will put you in a classroom and teach you the law and how to deliver what you know, so dry knowledge based information (the law) with scenario based trials. Each force delivers its own package of training, whereas when I joined I went away to a residential training school for four months. Now, it’s delivered in-force. And each force may vary how they deliver it slightly. But each probationer will get taught the same lessons, it’s just how it’s all broken up that may be different.

On the job training

You’re with your tutor for ten weeks (making sure you tick off everything in your book that you need to prove you can do) before you go back to class for a little while.

Back on your own

You come back to your shift and work as part of your shift now, not attached to your tutor, but as a fully functioning member of that shift. As long as you were signed off during your ten weeks tutor period. But, you are still on probation and you now have a book to complete, a list of tasks, to prove you are capable of doing the job. So as you go about doing your job, you fill in the normal amount of (excessive) paperwork, plus your probationary paperwork, and get someone to sign off that they’ve seen you complete those tasks to a satisfactory level and eventually at the end of your two years, you will become a regular old PC.

Way before your two years is up you’ll feel settled and part of the furniture anyway. It doesn’t take long to settle into the job. Especially if you have a great team to work with. And when you’re in uniform, your team, your shift is everything. That’s not to say the job won’t continue to throw up scenarios that will tax your brain cells at every opportunity, it will, but you will grow in confidence without even realising it.

And, that’s how you’re detective got to be where they are now…