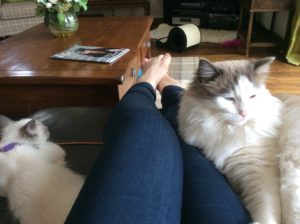 Today I’m pleased to welcome Margaret Kirk to the blog to talk about her First Draft process.

Margaret is a Highland Scot and a graduate of Glasgow University. She is the winner of the Good Housekeeping Novel Competition 2016.

Generally what happens is that a certain scene or image will come to me – for example, for ‘Shadow Man’ I had a picture in my mind of a bride in a bloodstained wedding dress. It didn’t play out like that in the end, but that first image is the one that gave me the initial impetus to start the project.

It usually involves staring into space a lot! Basically I start a new folder in Word, give it a working title and then just let things percolate for a while. 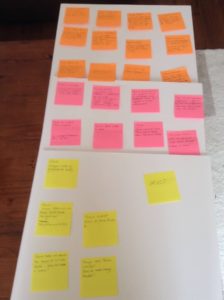 It sounds as though I’m working backwards, but the first thing I do is write the synopsis. It’s not the final version – that will change as the book evolves – but it’s as complete as I can make it. This is for two simple reasons: one, it helps me get the story straight in my head and acts as an early warning system for potential plot holes. Two, it’s much easier to write it at this stage when your mind is not cluttered with sub-plots and distractions – it helps you focus on the true core of your book. Also, at this early stage, you are not as heartily sick of your book as you will be after the umpty-third draft, and tackling the synopsis won’t seem such a horrendous task!

Very. I’m writing crime without the benefit of a background in the police or the justice system, so there are so many potential pitfalls for me. I know I’m not going to get everything one hundred percent authentically correct, but I do try very hard for things to at least feel real for the reader.

Basically, I pester people! I’m very lucky to have a couple of good friends who are ex-police, and for ‘Shadow Man’ I bugged them shamelessly for information about procedures, attitudes, terminology etc.

For other things, like time taken to travel between two points, if it’s possible for me to verify it myself, I will. I either visit settings or use Google Earth, and of course Google is an invaluable research tool. But I always try to verify whatever I find and not rely on a single source of information.

I know a lot of people use Scrivener, but I’ve never really got on with it. Basically I just start a new folder on my pc and put links, photos etc. in there.   I also have notebooks and files for physical items like newspaper cuttings.

Slowly! I always start with the opening scene, because it will be the one I’ve pictured most vividly. Then I add in any snippets of dialogue or further scenes which are going to feature – this is all in one long Word document, I don’t worry too much about chapters or scene breaks at this stage because I’m more concerned about getting a flow going.

Like a lucky pencil, you mean? Not really – as long as I’m close to a source of coffee, I’m happy! But if I get stuck, either going for a walk or weirdly, taking a shower seems to help get things going again. I think it’s to do with cutting yourself off from the staring at the blank page routine and doing something completely different. Though I do shower occasionally when I’m working. Honest!

It depends. If things are going well, time does pass surprisingly fast. At other times, the words can flow like treacle dropping off a very sticky spoon. The trick is when it comes to editing, to fix it so no-one but you can see the joins…

Until recently, it was just me on a chair with my laptop on my knee (and more often than not, a cat trying to edge its way between me and the keyboard.  But we’ve almost finished putting up a little writing shed in the garden, where I’m be able to plan murder and mayhem to my heart’s content!

Both. I do try to keep going, but if there’s something that’s really not working, I just can’t make myself go past it. I have to try to put in a fix, even if it’s not going to be the final one.

Word count. Because I’m a fairly slow writer, it at least gives me something to aim at. And writing every day not only keeps you ‘in’ the book, but it avoids the frantic last-minute rush to make a deadline. Which of course I have never done … ????

It’s certainly taken months. And basically, though it has some good, just need tidying up a bit scenes, overall it’s in pretty horrible shape. I will almost certainly need a further sub-plot to bring out everything I need to – which is just as well, because it’s also too short.

Probably a mix of computer screen and paper. The paper copy is good for picking up formatting I might miss on the pc.

The standard advice is to put it in a drawer for a month and forget about it, isn’t it? Nope, not going to happen, not for me. Because at this stage it’s in my head, all the time. When I go to bed, when I wake up, all the blasted time. So the most I can manage is a day or two away from actually writing anything, but taking time to think the various plot points through.  Did I make that clear enough, are there any characters I need to beef up/cut down? Why did I think x would be a good idea, for goodness’ sake? Now I’m left with situation y I’ve no idea how to get out of …

Then it’s deep breath, and into the next draft …! 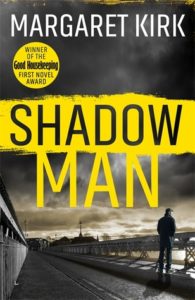 The body of the queen of daytime TV, Morven Murray is discovered by her sister, Anna, on the morning of her wedding day. But does Anna know more about the murder than she’s letting on?

Police informant Kevin Ramsay’s murder looks like a gangland-style execution. But what could he have stumbled into that was dangerous enough to get him violently killed?

Mahler has only a couple of weeks to solve both cases while dealing with his mother’s fragile mental health. But caught in a deadly game of cat and mouse, is ex-Met DI Lukas Mahler hunting one killer, or two?