Unbroken: My story of survival from 7/7 Bombings to Paralympic success by Martine Wright 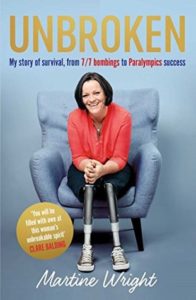 By turns heart-breaking and heart-warming, Unbroken is the remarkable true story of a woman who turned trauma and tragedy into hope. The autobiography of 7/7 bombings survivor and GB Paralympian, Martine Wright.

On the morning of 7th July 2005, Martine Wright’s life changed forever. As she boarded an eastbound circle line train at Moorgate station, amid the busy rush-hour, she didn’t pay attention to her fellow passengers. At 8.49am, one of those passengers detonated a suicide bomb that would kill seven people in the carriage, part of a wider attack on Londonclaiming 52 lives that became known as the 7/7 bombings.

Martine was, in fact, the last person to be brought out alive from the atrocities. She lost 80 per cent of her blood, was in a coma for ten days and underwent ten months of surgery. Not only did Martine survive her horrific injuries but, having never played sport seriously before, she took up sitting volleyball as part of her rehabilitation and went on to represent Great Britain at the Paralympics in London 2012 – a deeply poignant moment that marked her journey from tragedy to triumph.

Since then Martine has become a national figure: a formidable, powerful, brilliantly funny, hugely engaging heroine who has come back – almost literally – from the dead. In 2012 she was awarded the Helen Rollason award at the Sports Personality of the Year and in 2015 the Independent voted her one of ’50 most powerful women in British Sport’. Beyond her phenomenal sporting achievements, Martine continues to change the lives of those around her as a charity fundraiser and inspirational speaker.

I’m not sure words can do this book justice. This is more than a memoir. It is more than one woman’s story. But, what it is, I can’t really explain. And coming from someone who uses words for a living, is a poor state of affairs.

I listened to this book on audiobook. So, firstly I will comment on the narrator Zara Ramm. She did an amazing job, I couldn’t imagine another narrator narrating Martine’s book. She was so authentic I believed it was Martine talking to me. And for the events she was talking to me about, that is some feat.

And the events, she doesn’t hold back, she does talk about the events of that day, but it’s with an honesty and calmness that keeps you listening/reading. It’s not graphic for the sake of it, it is her story.

Martine had me in tears several times throughout the book and not just when she was talking about 7/7, but as she struggled with the recovery and as she talked about her family and also as she talked about how she thrived afterwards. Because how well she thrived after what she endured is miraculous. If this book doesn’t move you then I’m not sure I have a book in my arsenal that will.

This is a book that shows you strength and courage and determination. It shows you the true power of love. Wow, just typing this is bringing a tear to my eyes. It is that powerful a book.

Out of all the books I have read this year I would push this one into your hands and I would recommend the audiobook if you are have a audiobook subscription. If not, maybe trial it using your free book on this one. You won’t regret it.

It’s a powerful book and it will help you place your own life in focus. Read it this year if you can.

I am not a book reviewer. I am an author who reads a LOT. I love audiobooks. And if I come across a book I particularly love then I will share it with you. You won’t find crime fiction books here as I won’t do books in the genre I write in.

I hope you enjoy the few books I decide to share.