Wild: From Lost to Found on the Pacific Crest Trail by Cheryl Strayed 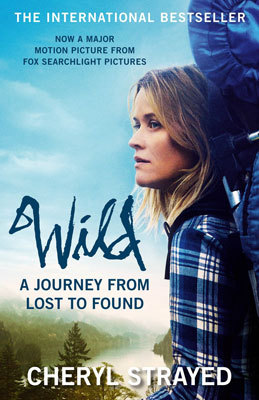 A powerful, blazingly honest memoir: the story of an 1100-mile solo hike that broke down a young woman reeling from catastrophe and built her back up again. At 22, Cheryl Strayed thought she had lost everything. After her mother’s death, her family scattered and her own marriage was destroyed. Four years later, with nothing more to lose, she decided to hike the Pacific Crest Trail from the Mojave Desert through California and Oregon to Washington State – alone. She had no experience as a long-distance hiker, and the trail was little more than an idea: vague, outlandish, and full of promise. But it was a promise of piecing together a life that had come undone. Strayed faces rattlesnakes and bears, intense heat and record snowfalls, and both the beauty and intense loneliness of the trail.
Wild vividly captures the terrors and pleasures of forging ahead against all odds on a journey that maddened, strengthened, and ultimately healed her.

Anyway, back to the book. Again, I’m only telling you about books I enjoyed so you can take it as given that I loved this book. It was quite a long narration and I wondered how on earth she was going to fill that time telling me about a walk she took! But, she did and it was fascinating. It did also include some flashbacks to her life before the walk, the place she had been that had resulted in her taking such a drastic step as to leave everything behind and walk the Pacific Crest Trail, or PCT as it’s known. The loss of her mother, the relationship with her step-father and brother and then her husband. The breakdown of those relationships, of her life.

But it was the walk that fascinated me. Her determination. The people she met. The dedication to continuing forward no matter the difficulties she faced when she could easily have come off the trail.

From reading the blurb I thought she had been alone the whole time, but these trails are walked by many people every year and Cheryl met a whole host of personalities as she walked. Some she spent a few days walking with and others she just camped overnight with. Most of the time she did like to walk alone. It really wasn’t easy for her and it must have taken some willpower and strength to keep pushing forward.  It’s a story of endurance, of friendship, of the human spirit, of knowing yourself.

As I listened to this I wanted to do something similar. I wanted to be that strong. She made me want to go out there and do something significant like she had. But she was in the US. They have the vast trails out there. Though I did consider doing the Lands End to John O’Groats walk and even Googled it but realised I was probably not being realistic with my health issues. But that was the power of the book. It gives you itchy feet. It feeds your adventurous side. And if you only want your adventure from an armchair, then this book is just perfect for you!